Last week, CNN and Huffington Post broke stories about the Republican and Democratic Parties using Twitter feeds to secretly communicate ad buy and polling information to outside groups prohibited from coordinating their spending with parties. The information tweeted by both parties seemingly required a decoder key to use it. The Democrats included the decoder on their Twitter bio, while the Republicans did not post the decoder key, which suggests that outside groups may have obtained the crucial information from a nonpublic source. Lawyers will now argue over whether these tweets violated campaign finance laws, but it’s critical not to ignore the larger and more important point. Federal “coordination” rules are broken in many respects and need to be fixed.

For decades, federal law has limited contributions to candidates and parties to prevent corruption—limits that the Supreme Court has recognized must, in order to be effective, apply not only to direct contributions, but also to “all expenditures placed in cooperation with” a candidate or party.

In contrast, the Supreme Court has struck down restrictions on “independent” expenditures, most recently stating that such expenditures “do not give rise to corruption or the appearance of corruption” because the “absence of prearrangement and coordination . . . undermines the value of the expenditure.” Since the Court struck down the longstanding ban on corporate and union “independent” expenditures in Citizens United (2010), so-called “independent” spending has skyrocketed. According to the Center for Responsive Politics, such spending exceeded $500 million in this year’s federal elections, more than a ten-fold increase from the mid-term election preceding Citizens United. This explosion in spending has made all the more important the Federal Election Commission’s regulations distinguishing expenditures that are “independent” and “coordinated.”

Recent revelations about the creative use of social media illustrate how the parties and outside groups are anything but “independent” in any meaningful sense of the word and are pushing the boundaries of the FEC’s weak “coordination” rules.

Although FEC regulations make clear that a political party cannot provide internal polling and ad buy information to outside “independent” groups, the outside group may obtain the information “from a publicly available source.” Apparently, both parties used Twitter, a public forum, to share precisely the information covered by the regulation—information that would enable the outside groups to produce ads of great value to the parties. Whether or not such activity was legal seems to boil down to whether all of the party information used by outside groups was obtained “from a publicly available source.” Republicans’ failure to include the decoder on its Twitter page may have necessitated private communications with outside groups, a necessity the Democrats may have avoided. 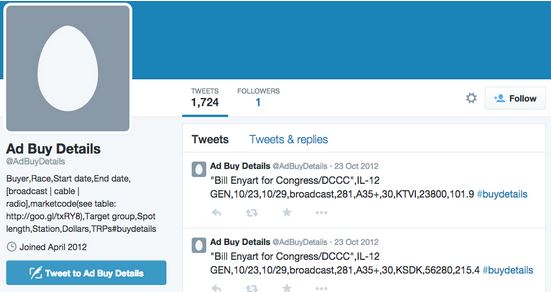