The trend towards growth in mobile phone usage continues to expand into all areas of Americans’ lives, and elections are no exception. While the 2014 midterms experienced the lowest turnout of any election in the past 72 years, according to a new national survey by Pew, “the proportion of Americans who use their cell phones to track political news or campaign coverage has doubled compared with the most recent midterm election.”

Since the most recent midterms, 28 percent of registered voters have used their cell phones to track political news or campaign coverage, up from 13 percent in 2010. And the number of Americans following candidates or other political figures on social media has nearly tripled, rising from 6 percent of registered voters in 2010 to 16 percent in 2014. 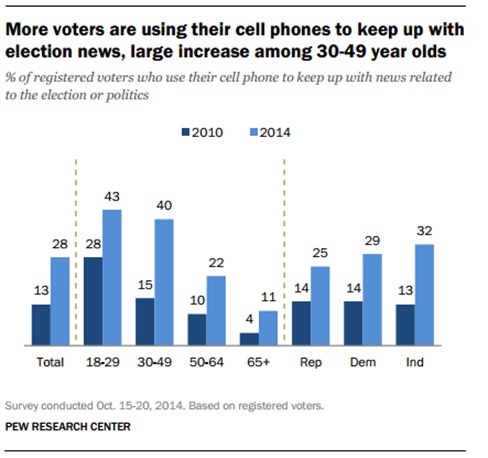 The Pew survey shows that the behavior of Gen Xers has started to mirror that of millennials. “Some 40 percent of voters ages 30-49 have used their cell phone to follow this year’s election campaign (up from 15 percent in 2010) and 21 percent follow political figures on social media (up from just 6 percent in 2010).”

People who engage in politics on digital platforms are more likely to be more engaged in political activities. Pew reports that “16 percent of registered voters who follow political figures on social media participate in various traditional campaign activities at high rates—from volunteering and donating money, to encouraging others to get out and support their preferred candidates and causes.”

Pew did not find that ideology was strongly linked with respondents getting their news through digital sources. But, they did find that “when asked about some reasons why they might follow political figures on social media, Republicans and Republican-leaning independents express a greater desire to be the first to find out about breaking political news, and to say that they use social media to get political information that has not passed through the traditional media ‘filter.’”

Facebook and Twitter both prominently displayed election information on their platforms. Facebook added an “I voted” sticker on the homepages of Americans who were old enough to vote for easy social sharing. Researcher looking at past elections have found this “tiny social nudge can provide positive peer pressure driving Facebook users to the polls.” Facebook also featured an interactive graphic similar to the data dashboard that Twitter created to organize tweets about #Election2014.

In addition, developers have started to create apps for mobile and social media platforms that promote political engagement. One example is the Philadelphia-based Intuitive Company, which designed the winning app in a competition to redesign the voter experience. Their product, Intuitive Voting, aims to counter voting apathy by making voting a frictionless process. It helps people register to vote and can create sample ballots with the ease of “ordering takeout.” As the number of voters who flock to smartphones and social media increases, app developers will continue to create innovative tools that encourage younger people to travel to the polling booth.

Looking towards 2016, politicians and campaign organizers should not ignore the importance of mobile and social media as trusted mechanisms for disseminating political information. Now that one quarter of registered voters are using their cell phones to obtain political news and smartphone ownership continues to increase dramatically, digital news platforms and social media integration will only become more important.