Social media platforms have proven themselves valuable recruitment tools for campaigns of all types. It is little surprise then in recent years that terrorist groups like Al-Qaeda have employed Twitter to recruit volunteers and advocate for their cause. Building on that legacy ISIL has started to use the classic Internet meme of cat pictures to draw attention to their activities. The Twitter account ISILCats uses lolspeak or the intentional misspelling of words often describing the imagined thoughts of cats or other animals. It’s unknown whether the Islamic State (IS) runs the account itself or if a supporter of the group is responsible. However, the intent is clearly to “humanize” the movement and reach broader audiences. To beat the Islamic State the U.S. and its allies must recognize the group’s sophisticated use of social media and develop strategies to counter this type of propaganda. 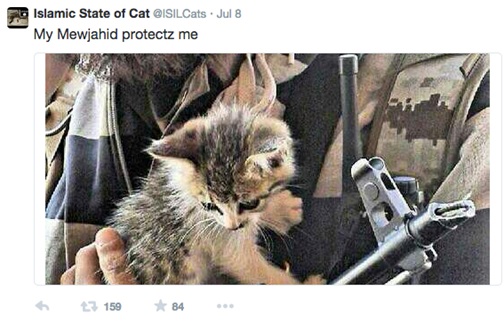 Jihadist propaganda has come a long way from grainy camera footage on VHS tapes. High definition videos and social media accounts are now the new norm for groups like the Islamic State who have certainly set the bar for other terrorist cells producing propaganda. There are dozens of social media accounts affiliated with the Islamic State. These online operations fall under a production company the group created in 2014 called the Al-Hayat Media Center. The Al-Hayat center was created to seduce Westerners into joining the ranks of the Islamic State and to distribute propaganda through social media platforms. It is difficult to assess the success of these efforts. But at a minimum the social media campaign is alarming given that the US government believes there are over 100 of its citizens currently fighting for the IS in Syria and Iraq.

In 2011 President Obama established the Center for Strategic Counterterrorism Communications (CSCC) to combat terrorist propaganda. The CSCC is currently leading the charge against the Islamic State on the digital battlefield by disputing the Jihadists’ message wherever they are known to have a presence. The main strategy the CSCC employs doesn’t actually involve direct confrontation with Islamic State operatives, but rather with the people they’re trying to recruit. It’s difficult to evaluate the success of the CSCC’s efforts because the program has not yet determined the best methods for utilizing social media. Sarcastic rejoinders and humor sometime read strangely on Twitter or do not make sense after translation.

The online propaganda war is a new component to conflict in the 21st century that allows enemies to reach one another’s home fronts directly. Snappy hashtags like #AllEyesOnISIS Jihad video games, and cats posing with AK-47’s demonstrate that the public relations wing of the Islamic State has a sophisticated understanding of new media and popular meme culture in the West. The Islamic State’s use of new media and general understanding of the Internet culture comes as a shock to most people after they consider the group’s mission is to create a caliphate. Despite the cognitive dissonance this thought creates, the web savvy of ISIL is real and deserving of a strong response.