In metropolitan areas throughout the country Internet access is ubiquitous.  However, many parts of America still do not have access to the Internet. They are typically rural regions where broadband deployment and maintenance is expensive due to sparse population density and difficult to traverse landscapes. Internet service providers (ISP) are unlikely to earn enough revenue to cover their costs in these remote areas. The Government Accountability Office (GAO) was asked to provide information on alternatives for broadband deployment in these unserved and underserved areas. The report examines different approaches to deploying broadband, stakeholder perspectives’ on this policy problem and potential FCC actions to bolster service in these areas.

The FCC estimated in 2010 that approximately 7 million American households did not have wireline access to broadband. Some municipalities are partnering with non-traditional private providers to develop creative ways to sponsor and fund broadband projects in unserved and underserved areas. For this report, the GAO closely examined 21 broadband projects with various sponsor types, such as local governments, non-traditional private providers, and cooperatives with different ownership and financing approaches.

They compiled a list of potential broadband network projects in unserved and underserved areas and categorized them by the group that would deploy them: municipalities, private companies, regional consortiums, and cooperatives. The list included some networks that were planned but did not come to fruition for various reasons. The selection of case studies represented all four project types as well as the source of their funding: public, private, or a mixture of both.  Furthermore they collected information on scope, status, construction costs, and funding. 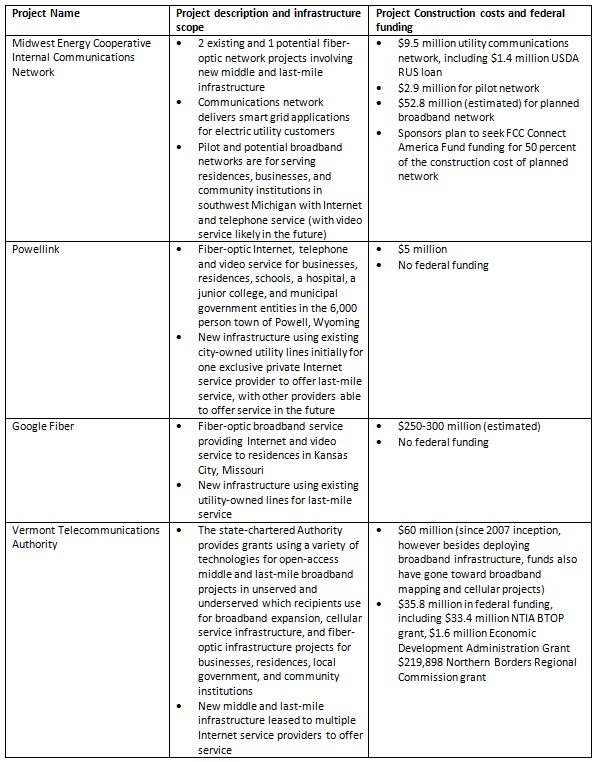 The budgets for these projects categories vary widely. To balance out the differences, the FCC established the Connect America Fund in November 2011 to support voice and broadband access in areas lacking private investments. The FCC adopted an order in January 2014 stating that it will solicit proposals from non-traditional providers, including utilities and municipalities to deploy broadband technologies in rural, high-cost areas. The FCC plans to continue exploring options and gathering information for deploying broadband to rural areas.

The Internet has slowly transformed from a luxury item to a necessary tool for communicating and interacting with the world. Over time the government will switch services over to Internet Protocols. At that point copper phone lines will become useless and those without Internet access will not have access to emergency information. Before that time policymakers must ensure that every American can connect to high speed Internet.

To read more you can find the full report here.

Rulemaking in privacy legislation can help dial in ad regulation