Feminism needs fathers. Unless and until men and women share the responsibilities of parenting equally, gender parity in the labor market will remain out of reach.

As Isabel Sawhill and I argued in our piece on “Men’s Lib” for the New York Times, “The gender revolution has been a one-sided effort. We have not pushed hard enough to put men in traditionally female roles—that is where our priority should lie now.”

An important step towards gender equality is then the provision of paternity leave, or at least forms of parental leave that can be taken up by fathers as well as mothers. Right now the U.S. is one of the few advanced nations with no dedicated leave for fathers: 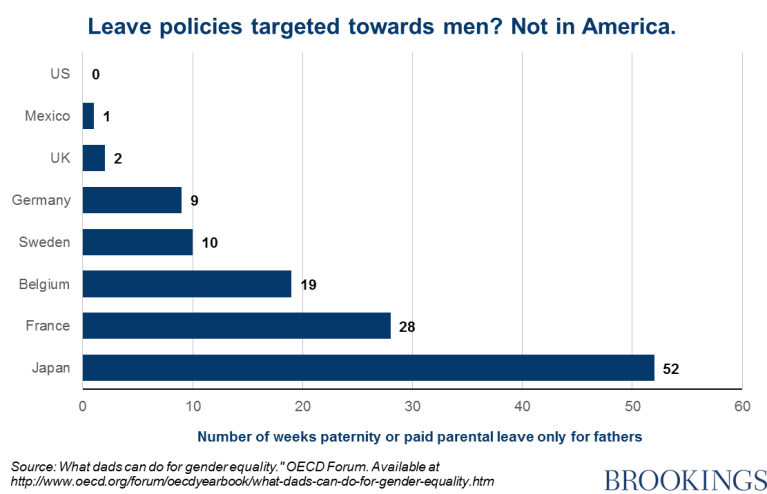 But there are reasons to be hopeful. More companies are offering paternity leave or, like Amazon, a “leave bank” that parents can share between them. Hillary Clinton is promising to push for paid family leave if she wins in November. Recent studies of California’s paid leave scheme, introduced in 2004, suggest that there are significant benefits for fathers.

The number of fathers taking leave while the mother is in paid work rose by 50 percent, according to an analysis of the American Community Survey by Ann Bartel of Colombia and her colleagues.

Men are more likely to take leave when it is exclusively available to them—with a so-called “use it or lose it” design—and when the period of leave is paid. The Quebec Parental Insurance Plan, for instance, which offers fathers three to five weeks at home with a child, resulted in a 250 percent increase father’s participation in parental leave.

Of course, there are costs. Paid leave has to be funded: either through payroll taxes (as most Democrats including Senator Kirsten Gillibrand want), taxes on the wealthy (Clinton’s preferred approach), or tax breaks for firms (as Marco Rubio has suggested).

So what are the upsides? Among the potential benefits from paternity leave are:

More than a day

Gender roles have evolved rapidly in recent decades, especially in terms of the place and status of women. But the evolution of our mental models of masculinity, and especially fatherhood, has been slower. Helping fathers to take time to care for their children will help children, families, and women. Fathers need more than a day.