People who face the future with confidence and optimism are more likely to invest in that future and thus, not surprisingly, have better outcomes. This relationship between beliefs and behaviors can also be passed on from parents to children, and so contribute to inequalities not only today, but in the next generation.

Measures of life satisfaction typically ask respondents to picture the best and worst possible lives they can imagine, and then to place their own life on a ten-point scale ladder, with the best life at the top and the worst at the bottom. In the Gallup Healthways poll, which surveys a nationally representative sample of Americans on a daily basis, participants are also asked to predict where they think they will be on that ladder five years hence. This future life satisfaction measure is obviously more speculative than the current satisfaction question, and picks up innate optimism.

Poor blacks have a positive outlook on life

The correlates of current life satisfaction are well known: wealthier, more educated, healthier, religious, and employed respondents are, on average, more positive. Men are less happy than their female counterparts; whites, blacks, and Hispanics are all happier than Asians.

The Healthways poll confirms most of these findings, with one significant exception: poor blacks score markedly higher than the average. Poor whites and poor Hispanics score lower, as expected. Poverty is defined here as the bottom four income categories in the Gallup Poll, corresponding roughly to the U.S. poverty line of around $20,000 in household income per year. Approximately 20 percent of the sample is in this category. At the other end of the scale, 15 percent of the sample is ‘rich,’ with a household income of more than $10,000 per month.

The rich are happier on average; and here, race has little impact. Indeed, the coefficients on the interaction terms in the multivariate regression analysis (including controls for age, being religious, and region) on rich blacks and Hispanics are actually negative, while the one for rich whites is insignificant.

Some caution is required here. Blacks and Hispanics are slightly under-represented in the Gallup Poll, and the most destitute among them—incarcerated black males and illegal immigrants—are not represented at all. But the findings are nonetheless striking. 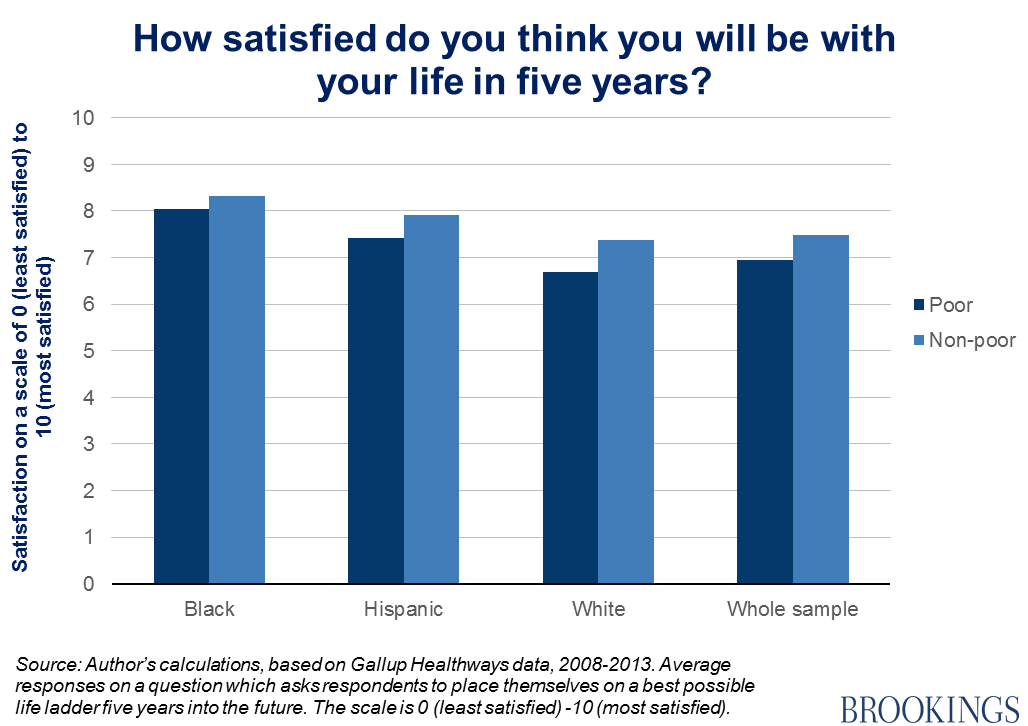 Hopeful, but not secure

These findings do not accord easily with the status and situation of black Americans, or the picture that comes from the recent riots in Baltimore and Ferguson. Certainly black American optimism does not seem to stem from a sense of security in the present. Poor blacks feel least safe on their neighborhood streets at night: 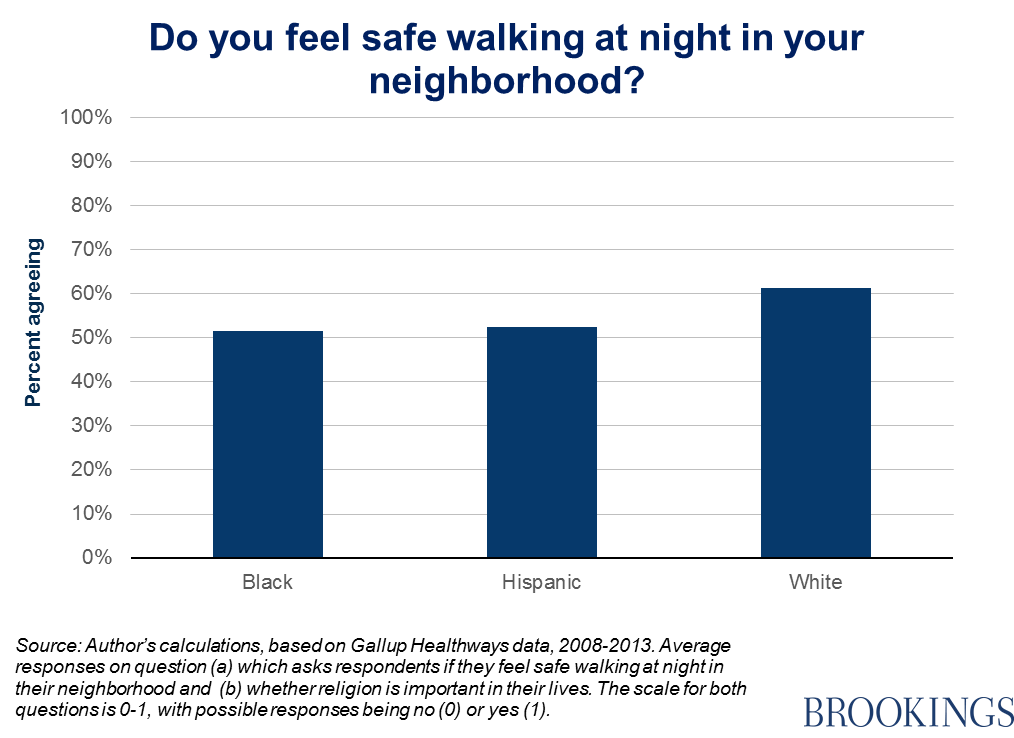 So what is going on here? A recent article in the Atlantic, noting the remarkable optimism about the state of the country among blacks and Hispanics, posited an ‘Obama effect.’ Support for President Obama has gone down among many cohorts, but it has remained steady among blacks. A black President may be raising black hopes.

There may also be community or religious factors at play. The riots in Baltimore and Ferguson had a clearly identified grievance—violence against blacks perpetrated by the police. Yet an equally if not more horrifying—but much more random—act of violence by a deranged white man in Charleston resulted not in black anger and violence, but in a tremendous show of community solidarity and support. Black churches are an important part of the picture, given the importance of religion to their members: 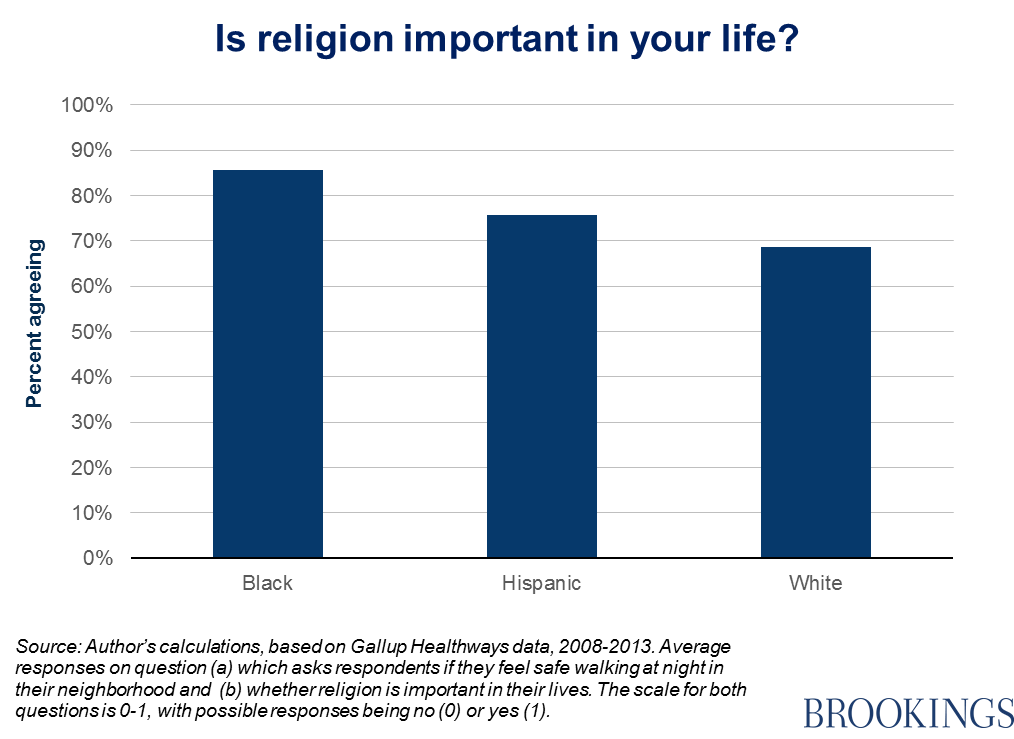 The black American Dream: reasons to be (more) cheerful

There are of course countless other explanations. But the optimism of black Americans—especially the poorest—is a reason to be a little more hopeful. The second term of our first black President is nearing its end, but a renegade political candidate with open disdain for minority groups is enjoying rising support. At such a moment in history, it is noteworthy that it is black Americans who seem to be keeping faith with the American Dream.