Every so often an academic finding gets into the political bloodstream. A leading example is “The Great Gatsby Curve,” describing an inverse relationship between income inequality and intergenerational mobility. Born in 2011, the Curve has attracted plaudits and opprobrium in almost equal measure. Over the next couple of weeks, Social Mobility Memos is airing opinions from both sides of the argument, starting today with Prof Alan Krueger, the man who made the Curve famous.

Building on the work of Miles Corak, Anders Björklund, Markus Jantti, and others, I proposed the “Great Gatsby Curve” in a speech in January 2012.  The idea is straightforward: greater income inequality in one generation amplifies the consequences of having rich or poor parents for the economic status of the next generation.

The curve is predicted by economic theory…

There are strong theoretical underpinnings for the Great Gatsby Curve. Gary Solon has shown, for example, that the relationship is predicted by a standard intergenerational model if the payoff to education increases over time. This causes inequality to rise in one generation, but also increases the significance of this inequality for children’s economic success, since well-off parents have more resources and more incentive to invest in their children’s education.

Other mechanisms could also underlie the Great Gatsby Curve.  For example, if social connections are important for success in the economy (e.g., getting the right summer internship), and wealthy parents have access to job networks, then a spreading out of the income distribution would leave children from the bottom of the distribution in a more disadvantaged position in terms of gaining access to networks that will ultimately lead to a higher paid job.

…and supported by evidence

Most of the available empirical evidence supports the Great Gatsby Curve. The original research documenting the Curve was performed at the country level, finding that countries with greater inequality (typically measured by the Gini coefficient) tended to have lower intergenerational income elasticities, which measures the importance of parents’ income for their children’s income.

Most impressively, recent research by Raj Chetty and coauthors using tax data finds that areas within the U.S. that have greater income inequality also tend to have less upward mobility for children from low-income families (see graph below).  They further find that young children who move to areas with substantial upward mobility tend to reap the benefit of living in those surroundings, suggesting that changes to environmental factors can enhance economic opportunity. 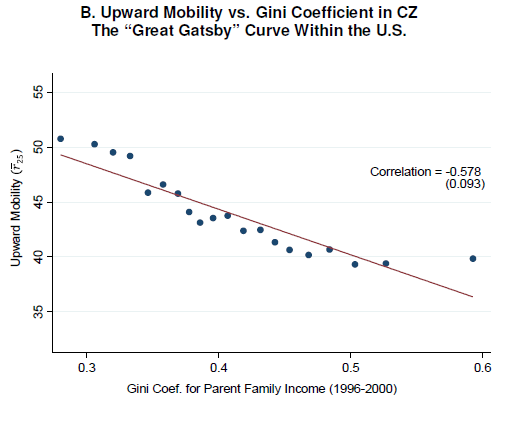 Note: Data for each commuting zone (or narrow geographic area) are grouped into 20 bins based on the Gini coefficient for parents’ family income, which is shown along the horizontal axis.  The vertical access shows the average percentile rank for a child born at the 25th percentile of the family income distribution in a commuting zone with a Gini coefficient that falls within the bin indicated by the horizontal axis.  Source: Chetty, et al. (2014).

Consistent with the Great Gatsby Curve, several studies also point to a growing gap in the resources devoted to education between high- and low-income American families.  As predicted by the Great Gatsby Curve, it appears that the dramatic rise in income inequality has created a more tilted playing field for the next generation.

A debate on opportunity

The compelling theoretical and empirical support for the Great Gatsby Curve has advanced public debate.  Almost all serious candidates for president — in both parties — have expressed concerns about the growing gap in opportunities in America.

Learning more about the former can help us to achieve the latter — which is, in the end, the most important goal of all.