Immigration looks to have been good news for social mobility, with immigrants doing much better in the US than their country of origin, and their children – second-generation Americans – seizing educational opportunities and rising rapidly up the ladder (see yesterday’s blog). To the extent that the chances of immigration reform are shrinking, post-Cantorquake, the American Dream may suffer too.

But even as things stand, the prospects for immigrants look to be worsening. 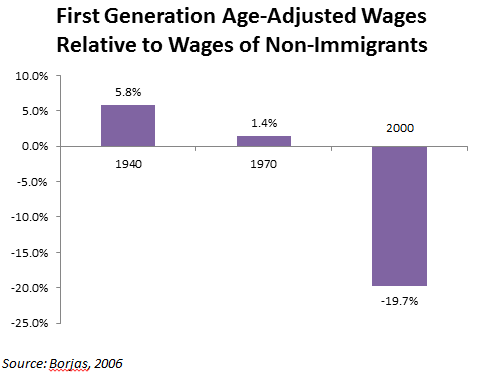 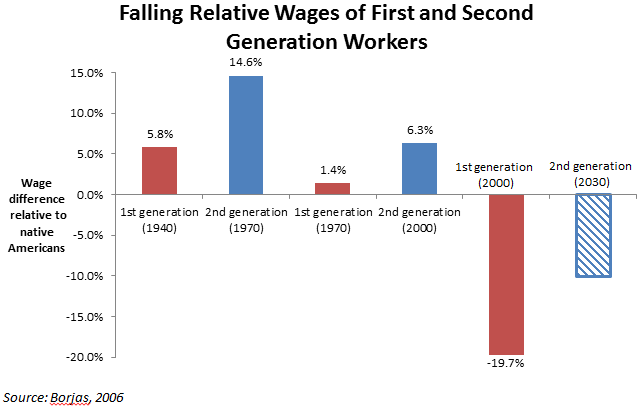 Why is the tide apparently turning against some immigrants? Segregation may be part of the story. It has always been true that new immigrants typically settle into neighborhoods dominated by people with similar ethnic origins. These ethnic enclaves are the origins of Little Italys and Chinatowns in cities across America. Modern day immigrants are following similar patterns. Historically, the children of immigrants eventually move into less segregated and more advantaged neighborhoods when they are adults – a form of upward mobility made possible by the higher relative wages discussed above.

The low wages of the modern population of immigrants and their children may contribute to keeping the future generations of immigrant families stuck in place. In the Immigration and Intergenerational Mobility in Metropolitan Los Angeles (IIMMLA) study, researchers found that residential integration of immigrant populations is happening at a particularly slow rate among Mexican Americans who do not move to more integrated neighborhoods until the third or fourth generation. We’ve discussed the negative effect of racial and income segregation on social mobility in previous blogs. Research from Patrick Sharkey and the studies produced by Raj Chetty and colleagues all show that families living in metropolitan areas where there are wide disparities between communities widens the opportunity gap and reduces mobility.

Immigration Reform and the American Dream

The United States has historically been seen as a place where anyone can succeed, where even an immigrant who came to the country with only the shirt on his back could create a bright future for his children. While social mobility rates have been high for immigrants in the past, future opportunities for immigrants look less rosy. As we move further away from immigration reform, we may also be moving further away from being a nation where immigrant families can achieve the American Dream.

Reopening America: How division and vulnerability hamper our response