Children’s early development is critical to their ability to successfully move through various “bottlenecks” or achieve later success, as Reeves and Karpilow show. In the Social Genome Model, initially developed at Brookings and now a partnership with the Urban Institute and Child Trends, we find that children who meet our metrics of academic and behavioral success by age five are almost twice as likely to be successful at reading, math, and behaving appropriately at ages 10 or 11: 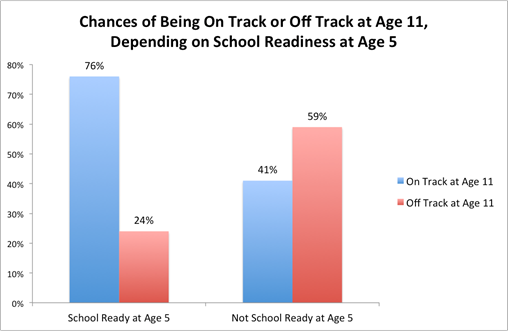 Success is a cumulative process across the life cycle. As Joseph Fishkin, James Heckman, the Brookings team, and others have all argued, opportunities for development early in life, whether through better parenting or better out-of-home care, could not be more important. But can such opportunities eliminate current income and racial gaps that show up at age 5 or even earlier?

Nature and Nurture: Not Separate

In this context, Fishkin’s discussion of the role of nature vs. nurture is especially important. As he notes, many philosophers, including John Rawls, have assumed that it is possible to neatly separate the two. Rawls and others assume that there are intrinsic differences that make it difficult for a variety of interventions to work—or that at least necessitate compensatory measures (such as eye glasses in the case of myopia). Without denying the role of genes or natural differences, Fishkin takes issue with the popular notion that these differences are an important cause of the failure of some children to acquire developmental competencies. As he says, “No talents or abilities are truly ‘natural’ in the way these premises presuppose.” (p. 91)

It is true that in research with groups of identical twins, it is possible to sort the role of heredity and environment, and that both play a role. It is also true that if we totally homogenized the environment, the only source of variability that remained would be differing genetic predispositions to respond to that environment.  But the consensus in the serious literature on these matters is now clear: genes don’t determine behavior; they simply influence how one responds to the environment.  Some children are more sensitive to various aspects of the environment than others.

What new research is discovering is that chronic stress in early childhood, whether from poverty, homelessness, abuse, neglect, or maternal depression can raise cortisol levels and affect the brain, undermining working memory, language, controlling emotion, paying attention, and self-regulation. This research and early interventions that could help are nicely summarized in a new policy brief by Ross Thompson and Ron Haskins called “Early Stress Gets under the Skin: Promising Initiatives to Help Children Facing Chronic Adversity.”

These interventions must be combined, however, with efforts to ensure that fewer children are born to adults who are ill-prepared to care for them and who, according to their own reports, did not want to have a child when they did. (This is a major theme of my forthcoming book, Generation Unbound). forthcoming, 2014).

In a word, prevention is likely to be more effective than remediation after the fact.