We ask a lot of early childhood programs: we want them to foster academic development, teach social skills, build character, and provide child care. And there are big expectations for their effects, encouraged by the successes of the Perry Preschool Project and the Abecedarian Project. In recent years, however, evaluations of the effects of some early childhood programs, most notably the Head Start Impact Study, have disappointed.

We need to invest in early childhood programs while being honest about what is required to produce the outcomes we want, and about what size effects current programs are likely to produce. We should not be surprised that recent evaluations are showing more modest effects. New programs are not as intensive as the Perry Preschool Project, for example, and some, such as Head Start, are at best distant relations in terms of their approach to early education.  There is far too much wishful thinking among policy makers who want Perry Preschool results at one-fifth the expenditure per child.

Another reason for more modest effects is that the comparison group in more recent evaluations has had greater access to formal early education. Today’s comparison groups are more likely to be attending some other kind of public preschool at age 4 than in the past (see figure). So when a program does not produce an effect on achievement, it means that it is not doing a better job, on the whole, than alternative early childhood experiences. For studies of either Head Start or public school pre-k today, the other program may serve a significant part of the comparison group.  As the average alternative early childhood experience has improved, such comparison gives the appearance of smaller effects for each program. 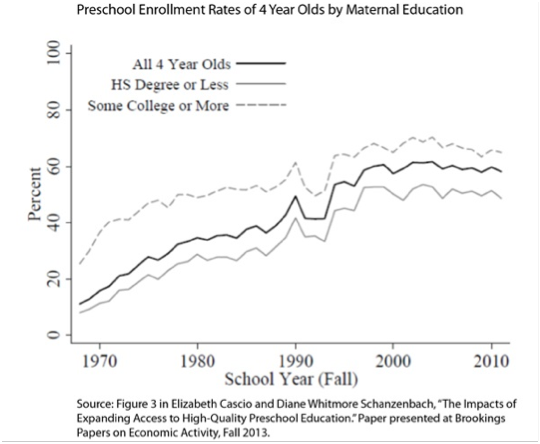 This also means we should pay special attention to programs that do manage to produce meaningful results. One such example is the Abbott districts program in New Jersey, a high-quality full-day pre-k program for 3- to 4-year-olds in the state’s highest poverty districts. It is the closest we have gotten to the Perry Preschool Project on a large scale—e.g., teachers with at least a bachelor’s degree, strong coaching and supervision, and no more than 15 students per class. Most importantly, estimates of the effects in these districts on long-term achievement are fairly comparable to Perry’s effects on long-term achievement.

So we need to acknowledge that many evaluations of early childhood programs will not blow us away. When they do, as well as when they don’t, we should pay special attention to the design and cost associated with those outcomes.