Racial segregation in American cities has declined slowly, but steadily over the past four decades. This is good news. Over the same timeframe, however, the level of economic segregation has been rising. Compared to 1970, the rich are now much more likely to live in different communities than the poor: 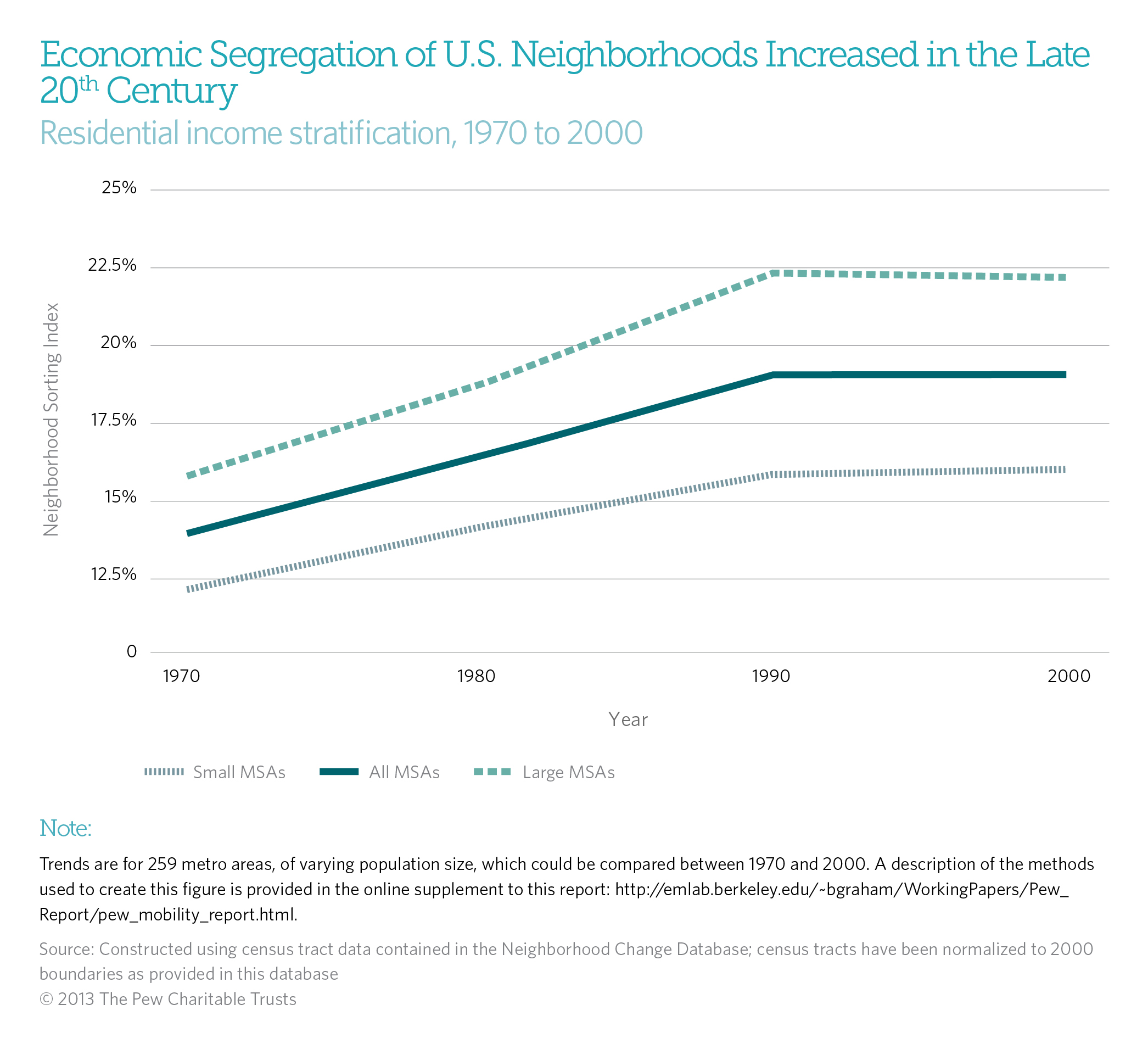 The segregation of urban neighborhoods by income has received much less attention than residential segregation by race and ethnicity, but there is growing evidence to suggest that we should start thinking about what this worrying trend means for economic opportunity in America.

In a report produced for the Pew Charitable Trusts’ Economic Mobility Project, Bryan Graham and I find that in urban areas with higher levels of income segregation, there is less economic mobility. Further, the degree to which the poor live apart from the rich is a more robust predictor of economic mobility than the overall amount of inequality within a metropolitan area. In other words, what matters is not just the size of the gap between the poorest and richest residents of a metro area, but how the richest and poorest are sorted across different communities.

The set of findings in our report is consistent with recent work on economic mobility from Raj Chetty, and also is consistent with well-developed economic theory on sorting and opportunity. Families living in any type of community within any metropolitan area can transmit their own resources and work ethic to their children, but in metropolitan areas where there are wide disparities between communities there is an additional mechanism by which poverty and affluence can be transmitted to the next generation.

In an economically segregated city, growing up in poverty means living in a neighborhood that offers lower quality schools, fewer economic opportunities, and more violence. For those at the top of the income distribution, growing up in a wealthy family means attending well-resourced schools, having access to economic opportunities through advantaged social networks, and being shielded from the social problems that arise in poorer communities.

The prospects for upward mobility among children growing up poor in cities with high economic segregation, like New York, appear very different from the prospects for children growing up poor in a city with less economic segregation, like San Francisco. The study of economic mobility must shift toward a focus on cities and states within the United States, rather than focusing on a single measure of mobility for the nation as a whole.

Social mobility is being threatened by neighborhood inequality: it is time policy caught up.