First, the very good news: President Obama is helping to keep social mobility on the agenda, today through his speech to the Center for American Progress. The less good news: he risks creating more heat than light by over-stating, and over-simplifying, the problems at hand. Moving the needle on social mobility will require cool analysis, bipartisan alliances, and a long-term strategy. It’s the wrong issue for knock-about politics.

Opportunity Gaps Are Bad, But Not as Bad as President Obama Says

The President’s analysis of social immobility was based on figures showing ‘stickiness’ at the top and bottom of the income distribution. Specifically, he cited a statistic that two in three children in the top quintile will remain “near the top” whereas “less than one in twenty” children from the bottom quintile have a shot at making it to “the top”. But there’s a bit of elision going on here. When President Obama speaks of high income children staying at the top, he is referring to the number of children born in the highest income quintile who will remain in the highest or second-highest quintile. But his statistic for bottom quintile children refers only to the number of children who make it to the highest quintile. The proportion of children from the bottom quintile who make it “near the top” is closer to one in five as seen in the graph below from a recent Brookings Paper: 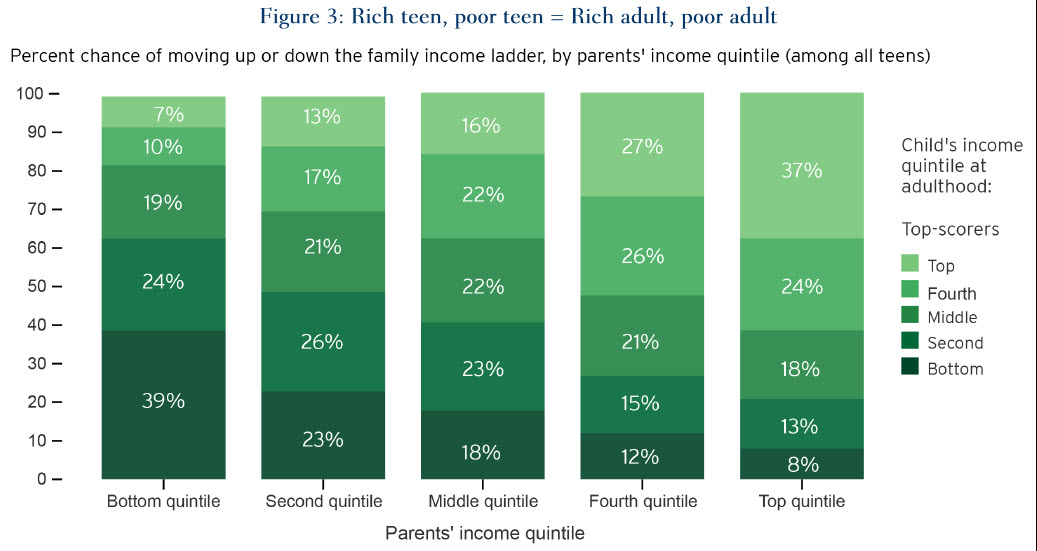 Don’t get us wrong: there is absolutely an opportunity gap between low and high income children. It’s just not as big as President Obama claims.

In Fact, Hard work and Skills Matter a Lot for Mobility

President Obama also said that “while we don’t promise equal outcomes, we have strived to deliver equal opportunity — that success doesn’t depend on being born into wealth or privilege, it depends on effort and merit.” In fact, the opportunity gap between high and low-income children drops significantly once we allow for a measure of cognitive skills and personal drive. High-skill adolescents in the bottom quintile have 42 percent chance of making it to the fourth or fifth quintile:

Again, this is still lower than the 70 percent of high-scoring adolescents born in the top quintile who stay near the top. And it absolutely should be a concern that over one-in-five many low-skill, high income children remain near the top. Success does however still, to an extent, depend on skill and hard work.

Building a Coalition for Social Mobility

President Obama is 90% right to say that growing inequality and a lack of upward mobility are “the defining challenge of our time.” (He’d be 100% right if he recognized that while related, they are in fact two distinct challenges.) But he should be careful, both in his marshaling of the evidence and the politicization of the problem. Real progress on social mobility is impossible if it falls victim to political partisanship. We need to build a ‘big tent’ coalition to fight for more social mobility in America, based on hard evidence and open minds.

Profits and the pandemic: Building a more equitable model of capitalism