Social class is as British as rain or tea—and class is currently dominating the social mobility debate over on the other side of the pond. Not in terms of money or education, but in subtler forms of advantage and discrimination.

A nation that can produce Downton Abbey knows a thing or two about class. Clothes, sports, handshakes, friends, accents: it is about more than just money and grades. This might explain why graduates who are privately-educated before college are more likely to be in a top job three and a half years after graduating, according to a report commissioned by the newly-formed Social Mobility and Child Poverty Commission: 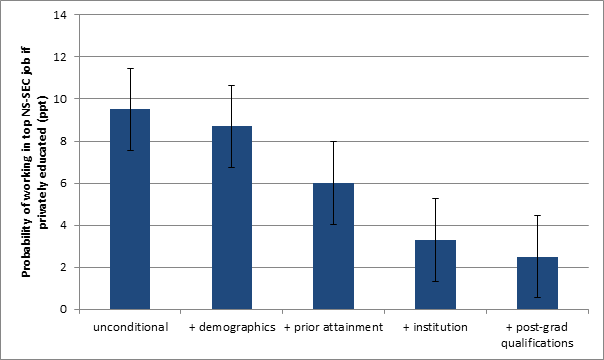 Figure 1: Relationship between private school attendance and working in a top NS-SEC occupation.

As you can see, most of the “posh school” effect comes from getting better exam results and attending better colleges. But even when controls are added for demographics (gender, race, and geographical region), prior attainment differences (“A level” grades at age 18; degree subject and classification), institution effects (institution of study and region of study); and post-graduate qualifications, a statistically significant association remains.

Our results indicate a persistent advantage from having attended a private school. This raises questions about whether the advantage that private school graduates have is because they are better socially or academically prepared, have better networks or make different occupational choices. Whilst we do control for formal differences in academic achievement, we cannot model whether privately educated students are better prepared for job interviews and for the world of work directly.

The researchers therefore looked at how graduates landed their jobs, and found that use of personal or professional networks did not alter the statistical results—even though the privately-schooled were more likely to make use of these networks. So networking doesn’t seem to be the answer.

What else might explain the posh school bonus? The list is potentially endless, of course—wealthier parents helping out with housing; different preferences or aspirations; a stronger work ethic or other “character capabilities;” or other attributes valued (rightly or wrongly) in top firms that are more likely to be found in those leaving elite schools at 18.

Gains in human or cultural capital may be one of reasons parents pay up in the first place. It may not be the kind of test results that these schools turn out—indeed there’s U.S. evidence that private schools are a poor investment on this score—but the kind of people they turn out.

At the very least, we should try to get a better sense of whether these gaps are the result of differences in certain skills with real value in the labor market—or merely the remnants of an outdated view of the “sort of person” who should fill top jobs. Snobbery or meritocracy? More research needed.