President Obama rarely talks about poverty, preferring to focus on those struggling to join the middle class (see figure in this post that compares Obama’s word choice to that of past presidents). This focus on opportunity is much more in line with American values than a focus on those who haven’t made it.

But poverty can’t be ignored. The possibility of upward mobility is most important to those at the very bottom. And the official poverty rate, for all its limitations, provides a sense of the number of people stuck on the bottom rungs of the mobility ladder.

Next Tuesday (9/17), the Census Bureau will release its annual report on the national poverty rate for 2012. We predict that it will tick down just a bit. Based on recent and forecast poverty rates and unemployment rates (see methodology here), our projections suggest an overall 2012 poverty rate of 14.8% and 21.4% for children, very similar to the 2011 rates of 15.0 and 21.9, respectively. This translates to roughly 46.5 million people in the US in poverty in 2012, of whom 16 million are children. For a single mother with two children, this means living with an annual cash income under $18,500. 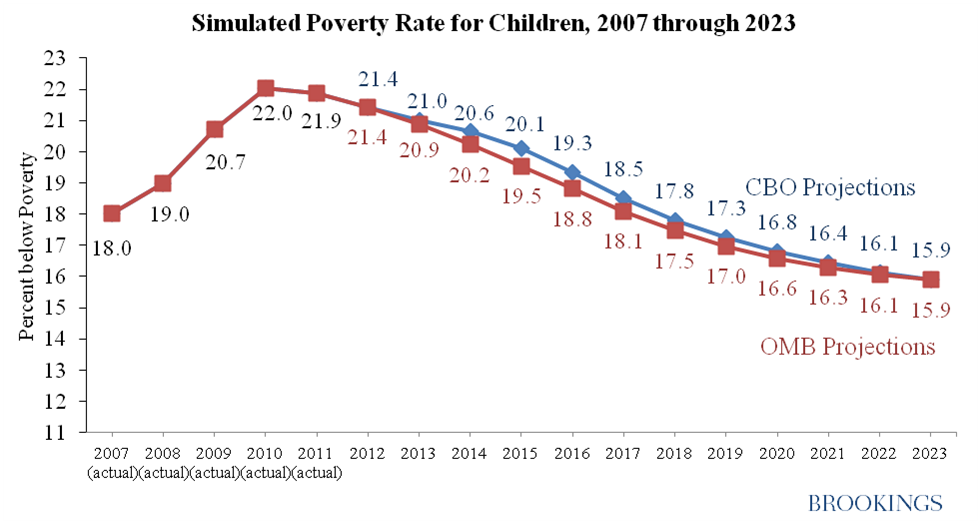 Although we don’t expect much improvement from 2011 to 2012, we are optimistic that poverty rates will decline over the next ten years. Why? Because the unemployment rate is projected to decline over the next ten years. A more robust economy means more people joining the labor force and finding jobs, more hours and weeks worked, and higher earnings. In Strategies for Assisting Low-Income Families, Sawhill and Karpilow estimate that if the unemployment rate falls to 5.4 percent in 2020, as CBO predicts, mean annual earnings for low-income households (households at or below roughly 200 percent of poverty) would increase by 15 percent. So as our economy slowly recovers from the Great Recession, the number of people leaving poverty should outnumber those entering poverty and poverty rates should fall.

Especially important for the goal of social mobility is the child poverty rate. Of individuals who spent more than half of their childhood in poverty, 45 percent were poor at age 35 (compared to 0.6 percent of individuals who spent no time in poverty as children). And poverty in early childhood is a particularly mobility-crushing experience, because the lack of resources and stresses of poverty limit development. In short, reducing the number of children growing up in poverty is strongly related to the broader goal of social mobility.

Poverty may be politically and rhetorically unpopular. But it must remain firmly in the policy conversation if we are serious about opportunity and social mobility.