In the end, it was all smiles, hugs, and selfies. Celebrities like Segolene Royal and Al Gore shook hands with lead negotiators for France, China, India and other countries. But for two weeks in Paris at COP21, and for six years before that, there was deep uncertainty about whether the United Nations system could deliver an adequate agreement to deal with the existential threat of climate change. 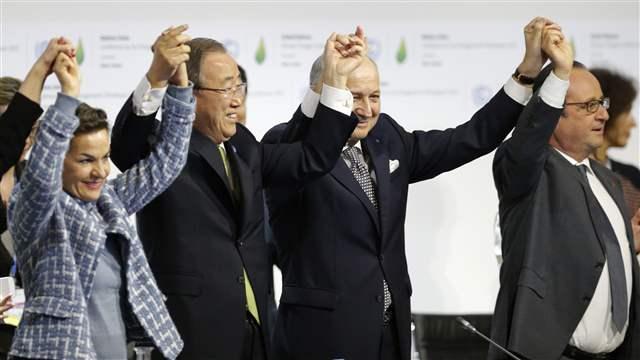 With great relief, French Foreign Minister Laurent Fabius— the leader of the Paris climate talks (COP21)—expressed how important this moment was, as he admonished delegates to accept the agreement in which he had led the crafting of: “We are citizens of the world, our children would not forgive us…The very credibility of multilateralism…this is what is at stake.”

Ghosts of past negotiations

At the climate negotiations in Bali, Indonesia in 2007, I was asked to keynote at a side event organized by UNESCO, the United Nations Educational, Scientific and Cultural Organization. Having those credentials allowed me to sit at the UN table and spend the week with UN officials. Their fear was palpable that the UN system would prove unable to lead humanity in addressing this crucial global issue.

Despite a contentious finish and some still-unfinished business, Bali laid out a “roadmap” that was supposed to lead to a successor treaty to the Kyoto Protocol, which was set to run out. Copenhagen in 2009 was the deadline, but the multilateral process there was bogged down in disagreements with just two days to go, as heads of state arrived and five nations whipped up an climate accord in a back room.

That disaster in Copenhagen led many to focus on actions by individuals, institutions, industry and social movements as more effective ways to address climate change, on other levels such as cities, businesses, and at the national level. We recently argued how important leadership from the UN is, and how global agreement is critical to any adequate response to this urgent global problem. In short, we need the multilateral process to deliver.

The specter of another train wreck of that magnitude hung over the Paris negotiations from the start to the very end. Fabius acknowledged that directly: “Nobody here wants a repetition of what happened in Copenhagen. We have to remember the context…If we were to fail today, how could we rebuild the hope?”

Resuscitating the multilateral system was not done in one year. Mexico was heralded for tireless and skillful work leading to the Cancun Agreements in 2010, there was a structure laid down in Durban, South Africa in 2011 for four years of negotiation, and after modest progress in Doha and Warsaw in 2012 and 2013, Peru was widely acclaimed for its positive efforts in 2014 to help make 2015 a remarkably successful year.

The Paris Agreement, whose final draft was distributed at noon Saturday for delegates from the world’s nations to review, was not all we needed. But neither was it only the lowest common denominator we feared it might be. As the Guardian’s George Monbiot put it, “The talks in Paris are the best there have ever been. And that is a terrible indictment.”

In the final hours, Fabius summed up the achievement “We have achieved what we thought was impossible…The proposed agreement is differentiated fair, durable dynamic balanced and legally-binding…” UN Secretary-General Ban Ki Moon described this pivotal moment: “the time has come to acknowledge that national interests are best served by acting in the global interest and solidarity. Nature is sending us urgent signals. We must protect the planet that sustains us. For that we need all our hands on deck.”

The outlines of the Paris agreement have already been reviewed many places, so I will only mention its main features: 5 year cycles of pledges, stocktaking of the adequacy of actions, ratcheting up of ambition each cycle, attempting to keep global temperatures to 2 degrees of warming, or lower, at 1.5.  This number was a major achievement for the “Climate Vulnerable Forum” of 43 nations around the world, gaining momentum over the past two weeks as the negotiations went along.  As Ian Frye, lead negotiator for the tiny Pacific island Tuvalu put it, “We firmly believe we have saved Tuvalu, and in doing so, believe we have saved the world.”

In the Paris Agreement, there are differentiated expectations for different groups of countries, rich and poor, but all nations are expected to do what they can. Many disputes remain in this regard, and there will be much debate in the coming days. How adequate and predictable climate finance will be delivered to help developing countries cope with climate impacts and make the transition to clean energy is not clearly addressed. Critically, the Paris Accord is still a voluntary system, with neither binding mechanisms or clear ways to enforce compliance. While laying out the ambitious goal of keeping warming under 2 degrees Celsius, the agreement will still leave the planet vulnerable to major impacts.

Besides leaving likely devastating impacts—which will occur even at 1.5 or 2 degrees Celsius— Monbiot argues that the Paris agreement is “comically lopsided,” dealing only with the consumption of fossil fuels, while entirely ignoring the side of their production. “Until governments undertake to keep fossil fuels in the ground, they will continue to undermine the agreement they have just made.”

He’s right, and points to perhaps the most difficult task humanity has yet to face up to: how to keep 4/5 of the known reserves of oil in the soil, coal in the hole, and gas under the grass. No less is required for us to keep global warming under the 1.5 or 2 degrees Celsius agreed in Paris. Despite having a few gestural statements about “just transition” for workers and “diversification” for nations heavily reliant on fossil fuels, the agreement provides little indication of how we will help the nations, communities, and workers entirely break away from this source of income laying under their territories. How will the massive power of fossil fuel companies be rapidly redirected to a zero carbon economy, as it must be?

Chile’s representative supported the starkness of this point: “This is the beginning of the end of the fossil fuel era.” One of the most exciting moments in the many speeches following the agreement’s adoption was when French President François Hollande said he would work to increase mitigation commitments even before 2020, increase France’s financial commitments to vulnerable countries, and to lead a global campaign to put a price on carbon.

In setting out that crucial agenda, Hollande acknowledged the shortcomings of the Paris Agreement. These are the kinds of actions that are urgently needed to make Paris more than 31 pages of words, but rather the beginning of a transformation. 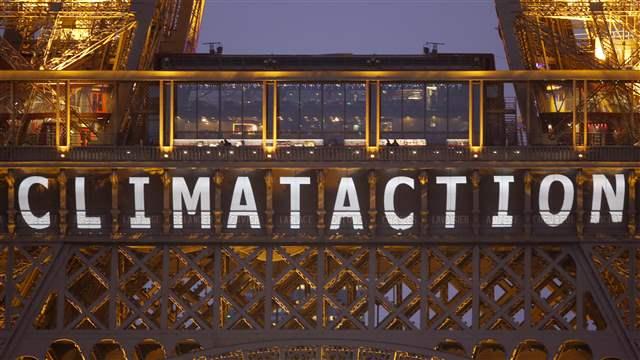 Reuters/Charles Platiau – The slogan “Climate action” is projected on the Eiffel Tower as part of the World Climate Change Conference 2015 in Paris, France, December 11, 2015

“This has been a triumph of multilateralism,” said the representative of the CARICOM, the Caribbean Community and Common Market. As the representative of the 48 Least Developed Countries said, “We are humbled and honored to have been part of the effort to craft one of the most important documents multilateralism has delivered.” After the approval of the agreement, Hollande put it tersely: “Long live the United Nations, long live the planet, and long live France.”

A historic moment that needs to be seized

Rather, we need to lean forward, to lead a nearly wartime mobilization of efforts to switch to clean energy, to transform our economies away from fossil fuels. Besides averting planetary-scale disaster for our species, the co-benefits of that transformation will be many, including the creation of great numbers of jobs, major benefits to public health and ecological systems, and greater international stability as we move away from the price volatility and political combustibility of fossil fuels. Paris may be an historic turning point in that effort.

What does the Supreme Court’s EPA ruling mean for climate regulation?

Green finance – The road from billions to trillions