As world leaders in Paris seek to establish a climate accord for the future, it is likely that sector-level contributions will not be a part of the target discussions and agreements. Since agriculture is one of the foremost drivers and burden-bearers of climate change, its omission could be detrimental. 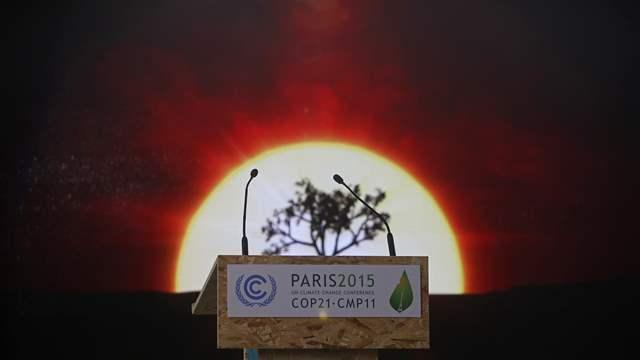 Pictures are displayed on a screen behind the podium of a conference room at the venue for the upcoming World Climate Change Conference 2015 (COP21) at Le Bourget, near Paris, France (Christian Hartmann).

In a new brief, Brookings Senior Fellow John W. McArthur explains the intense relationship between agriculture and climate change and highlights opportunities in Paris to nail down specific policies to promote climate-smart agriculture.

For agriculture, the real work will take place in country- and landscape-specific strategies to tackle interwoven efficiency, adaptation, and mitigation challenges while promoting food security.

He also argues that country-level actions in the Intended Nationally Determined Contributions (INDCs) will be the “most important COP 21 outcome for agriculture,” but, currently, they lack clear benchmarks specific to the agricultural sector and vary among countries. McArthur believes that cooperation among countries will be key to long-term success on climate change. We need to translate the current momentum on climate change into “sector-level action,” he says.

, and the relationship between agriculture and climate change.