After years of division and stalling, there is a wide recognition nationally and globally of the dangers of delaying action to mitigate the effects of climate change. Indeed, all major world leaders have shown support for a bold agreement in Paris next week. 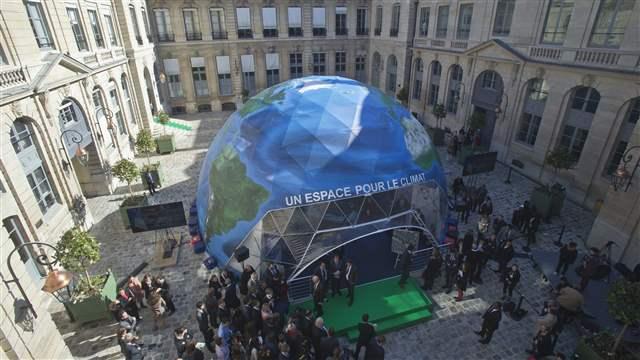 A general view shows the climate dome which presents an exhibition on climate, installed in the courtyard of the environment ministry in Paris, France (REUTERS/Michel Euler)

In a new brief, Amar Bhattacharya, a senior fellow here at Brookings, and Lord Nicholas Stern, a professor at the London School of Economics, discuss what has brought global climate change negotiations to the cusp of an agreement and how the 21st Conference of Parties in Paris (COP21) will set the stage for the next 15 years.

The authors urge leaders at the summit to not think of the climate talks in Paris as a “one-off opportunity to fix targets.” Instead, they argue that it is a “first step of many, based on regular reviews of how close we are to meeting the goal of avoiding dangerous global warming.”

In particular, they outline the four main areas where the quantity and quality of infrastructure can meet the needs for development and climate:

The Paris summit is a chance to build an understanding not only of the threats and risks from unmanaged climate change, but also the opportunities that lie in the low-carbon transition—including the path it paves to fight global poverty.

If these actions are followed, the authors believe it can “unlock a virtuous cycle” to transition to a low-carbon economy that will be better positioned to manage climate change.

, and what has brought global climate change negotiations to this moment, and how COP21 will set the stage for the next 15 years

The Great Blue Wall Initiative: At the nexus of climate change, nature conservation, and the blue economy

Young Ugandan climate activists on their work and vision