Several important lessons can be learned in the midst of the fierce debate among pundits, policymakers, and energy commentators about the European Union’s diversification away from Russian gas supplies. These are outlined below and are derived from extensive fieldwork, a review of the energy security literature, and analysis of decades of market and institutional developments in the European Union. For those interested in a more detailed analysis, my recent book may be of interest. The chief lessons are both plain and simple, though their implementation arguably less so.

The available evidence is overwhelming. In the larger part of the EU, member states have in recent decades increasingly integrated their markets, and by doing so have gained access to various sources of supply. In these countries, dependence on a single source is no longer an issue. In particular, in light of the Ukraine crisis, which seems to have brought geopolitics right back to the top of the agenda, it is crucial to keep in mind that zero-sum thinking, tempting as it may be, is not the way forward.

It is, however, also important to note that the standard EU mantra of liberalizing markets and implementing legislation can no longer be considered a panacea. It is about time that decision-makers in northwestern Europe, including Brussels, acknowledge that in certain parts of the EU additional incentives to invest have to be adopted in order to enhance energy security. In recent years, several prominent examples of this have come forth. Poland, which has, rightly or not, been one of the most vocal member states when it comes to the dangers of dependence on natural gas from Russia, has in just a couple of years’ time and with the support of EU funding, developed additional interconnection facilities with neighboring countries, most prominently Germany. It has also initiated the construction of a liquefied natural gas (LNG) terminal on its northern shores. The economics of some of these projects, and certainly the LNG terminal, can be questioned. Nevertheless, once the LNG terminal comes on-stream, the Polish TSO estimates that around 90 percent of Polish natural gas demand can be covered by sources other than Russian gas. That of course does not mean that Poland will no longer consume Russian gas. To the contrary, buyers in Poland may well buy the cheapest available feedstock, which in this case is Russian gas.

The point, however, is that there is access to alternatives, and that is what matters. Similarly, the Czech Republic has integrated its market successfully with the German market. Here too, single source dependency is solved. Finally, in Lithuania the construction of an LNG terminal alone incentivized the renegotiation of existing long-term oil-indexed contracts with Gazprom, and Lithuanian prices came down substantially. Here too the economics of the project were not decisive, and EU subsidies and possible amendments to existing domestic legislation were necessary to make the project viable.

These projects, however, should be seen as (pricey, arguably) insurance policies to prevent possible market power abuse by a dominant supplier, in this case Russian Gazprom. For too long policymakers in northwestern Europe have argued that the market would take care of energy security, if only existing legislation were implemented. It seems evident that this is not always the case, and a little push is required in certain cases.

As described above, in a part of the EU the private sector on its own is not going to make all the necessary investments in infrastructure to facilitate the free flow of natural gas throughout the EU. All the existing infrastructural bottlenecks have been documented extensively and debated for years, and so it is time that EU and member state decision-makers put their money where their mouth is, and direct the available financial means to the places where it is most urgently needed. It requires political leadership in the other member states to acknowledge that these few member states are where collective financial means should flow, and not to domestic pet projects that politicians tend to advocate.

In addition, it is also common knowledge that the existing financial means that European institutions have available are not sufficient to address the existing bottlenecks. The only structural mandate that the European Commission has to co-invest in energy infrastructure is under the Connecting Europe Facility. Available financial means comprise a paltry €5.85 billion for the period until 2020, which is only 3 percent of the estimated required investments (in both natural gas and electricity infrastructure).

New proposals to attract investments in energy infrastructure are necessary, because further expanding the financial bandwidth of the European Commission is politically unfeasible and outright public financing of infrastructure is a questionable proposition to begin with. The European Investment Bank can possibly play a more prominent role here, or more generous rates of return for specific projects can be applied, in order to attract pension funds or institutional investors (a model that has been applied in individual member states in the past). 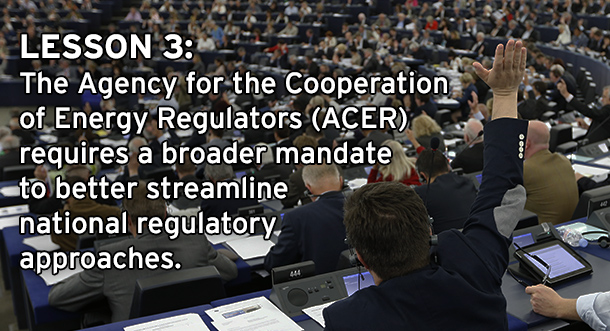 There are clear indications that gas infrastructure projects with a cross-border component in particular can struggle to find sufficient financial means. Market size can be a barrier to investment, but disagreements between national regulatory authorities can as well. The EU currently lacks an agent that is sufficiently equipped to coordinate and, where necessary, overrule determinations based on national interests. However, ACER is the natural fit to play this role, were member states to agree on an expansion of its decision-making powers.

What some observers and politicians tend to forget is that the EU has slowly but gradually moved toward becoming a liberalized gas market. In this context, private or privatized actors purchase and trade commodities. Though these actors have to operate in a political climate that may well affect their decisions, political preference does not become part of the commercial lexicon. This has a number of important consequences.

First, this has to be taken into account when analyzing the (sometimes harsh) day-to-day rhetoric about natural gas from Russia. Also in Eastern Europe, the case of Poland demonstrates that at the end of the day the cheapest supplies of natural gas are preferred over other sources. The aforementioned LNG project was only constructed with the help of subsidies and regulatory policies. It remains to be seen to what extent the plant will be used to bring in natural gas. Indirectly, the Polish taxpayer will pay a premium for natural gas that is imported in the form of LNG. Evidently, the sense of energy security comes at a cost, yet these costs vary throughout the EU.

Second, this has to be taken into account when examining the efforts of EU policymakers to strengthen ties with alternative suppliers, for instance from the Caspian region or the eastern Mediterranean. Attractive as it may sound to purchase natural gas from exotic places, it is important to keep in mind that unless European buyers collectively decide that they are willing to pay a premium for their natural gas, the cheapest commodity will always be preferred. In the case of Europe, it seems that for the foreseeable future that means natural gas that is domestically produced, and then imports from Russia, Norway, and Algeria will be most in demand. Whatever additional supplies are required, can be imported in the form of LNG.

To give an indication of the premium that would have to be paid, estimates from Bernstein Research suggest that approximately 57 billion cubic meters (bcm) of natural gas demand can be saved, and thus Russian imports reduced, at the cost of US$33 billion per year. Measures would include drawing down gas inventories, outbidding Asia on LNG, and switching to oil as a feedstock for electricity generation. When it comes to outbidding Asian markets for LNG supplies, estimates suggest that around 18 bcm of Russian imports per year could be replaced, at an annual cost of US$5 billion. This assumes that Asian-contracted LNG can be diverted at a cost of US$17 per million British thermal units (mmBtu). Most studies suggest that in the coming years the amount of imports of LNG into the EU will increase substantially. Regardless, it is important to keep in mind that because of the low marginal costs of Russian gas, Gazprom likely holds the marketing power in the foreseeable future. Thus, it is important to note that additional LNG will mostly replace dwindling domestic production. It is also important to reiterate that for the places where alternative supplies may be most direly needed, the existing infrastructure is not in place to actually get the LNG there. This again confirms the urgent need to complete the integration of the internal gas market, so that all member states have access to several sources of supply.

Debates about energy security have always been full of rhetoric and are often ill-defined to begin with, and the EU is not different in this respect. A European commissioner recently stated that imports from countries with an autocratic rule cannot be accepted anymore (referring to imports from Russia). Fine, yet in the same talk it was announced that ties with suppliers in countries like Algeria, Azerbaijan, Turkmenistan, and others have to be strengthened. This does not make sense. Unless EU buyers decide to pay a significant premium for natural gas from preferred sellers, this rhetoric should be toned down. Building on the previous lessons, it would make sense that EU policymakers focus more on resolving issues where they actually have (at least some) mandate, e.g., infrastructure and regulation, rather than haggling over the origins of its natural gas, since those decisions are mostly out of its hands (see lesson 4).

The concept labelled an Energy Union, coined by the EC President Jean-Claude Juncker, offers a tremendous opportunity. Once again, the EU is facing a common enemy, Russia. Generally, that provides the 28 members of the EU with an extra incentive to make progress on politically difficult issues, such as most things related to energy policy. Admittedly, thinking and debating about the Energy Union is ongoing, though the initial indications are not promising.

Initial analyses show that in fact there is very little new policy in the Energy Union. Most importantly, the EC seems ambiguous about the future role of natural gas. Brussels has indicated that it does not want to increase the share of the commodity, but it does want to reduce the share of Russian resources. It also wants more investments in gas infrastructure without clear indications that new incentives are on the table.

It seems a curious strategy. Who wants to invest in a commodity without prospects for growth? Does the EC expect investments in energy infrastructure in Central and Eastern Europe to be made without additional incentives? And how does the EC envisage influencing the private sector when it closes deals with external suppliers? One cannot help but avoid the impression that the EC is currently more occupied worrying about issues that it actually has limited mandate in (the origin of resources), and at the same time risks using this opportunity to make meaningful progress in areas where it can make a difference (energy infrastructure and regulation).

If EU leaders want natural gas to play a prominent role in its fuel mix, and given the ambitious renewables agenda, there are good reasons to assume that the focus should be on completing and fine-tuning the internal market rather than quarrelling about one external supplier. That is a political debate that is increasingly distant from market realities. As described, the current trajectory to address concerns of market abuse by certain suppliers (namely by further European cooperation and integration) has proven to be the right one and should be continued.