Every year, in early July in Aix-en-Provence, the Cercle des Economistes organizes a forum, the “Rencontres Economiques.” This year the focus was on the changing nature of work. One panel focused on the challenges and opportunities of increased migration for migrants, and for the host and sending countries. In a discussion that largely focused on the benefits of expanding the mobility of the young, one of the most striking observations highlighted that, in spite of the surge of asylum seekers landing on our shores, immigration of humanitarian origin (conflicts and natural disasters) are only around 10-15 percent of migrant flows. Yet, since early July, the situation has only gotten worse with a quarter of a million refugees having crossed the Mediterranean at mid-year, more than all last year while Turkey is hosting close to 2 million Syrian refugees. Certainly, the disintegration of states resulting from political, ethnic, and religious conflicts are the proximate causes of this migration surge, but evidence from the new climate-economy literature suggests that weather has also played a role and will certainly play a growing role as our planet warms.

Along with trade and capital movements, migration was the engine of 19th century globalization. By contrast, barriers to the movement of people, especially the unskilled, has characterized our current globalization. If one corrects for migration related to the demise of the Soviet bloc, the flow of migrants relative to world population has remained remarkably stable at around 3 percent since the end of World War II (See Figure 1: This would show up as points on the 45 degree line). But, as shown in Figure 1 (stocks normalized to one in 1960), between 1960 and 2010, the proportion of South to North migrants in total population has grown three times as fast as North to North migrants and decadal South to North migration rates more than tripled, increasing from 1.5 percent to 8.0 percent while the North to North decadal rates only doubled (from 4.6 percent to 10.9 percent) (for francophone readers, see here). These patterns reflect the combination of a change of constraints (lower costs to migrate) and of incentives (economic and political, in which climate is playing a role). 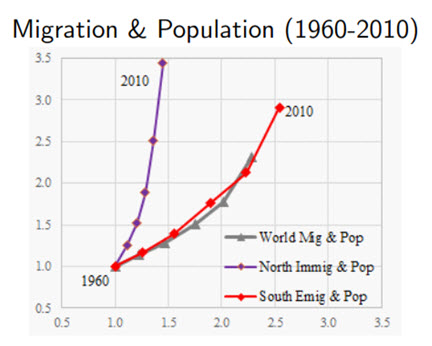 Climate and Migration: Past and Recent Episodes

Historians note that during the medieval warm period for those societies that lost, migration was the only protection against disasters. More recently the rise of the dust bowl in the United States in the 1930s led to a displacement of 2.5 million people. And currently, while the ongoing Syrian civil war has many contributing factors (political conflicts, a policy of food self-sufficiency relying on water-intensive wheat crop, inadequate urban policies, and refugees from Syria), the exceptionally long five-year drought linked to rising mean temperatures in the Eastern Mediterranean has contributed to civil unrest. Iraqi refugees added on to the 1.5 million internally displaced persons in Syria (see Figure 2). These migrations amounted to 20 percent of urban population in Syria, which increased by 50 percent in eight years. Had misguided agricultural policies been avoided, the supply of groundwater would have provided a cushion during this exceptionally long drought and, according to the accumulating evidence of the new climate-economy literature, social tensions would have been less. 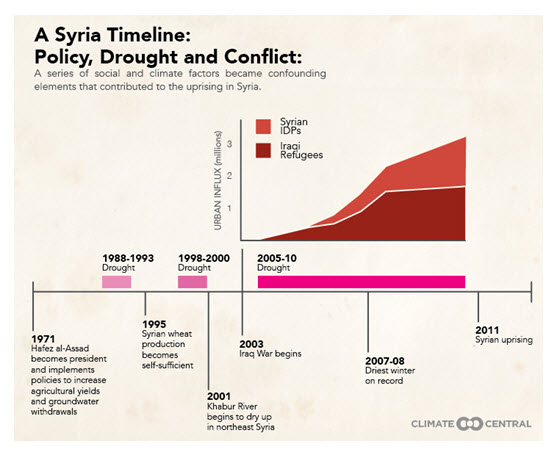 
Looking ahead: economic and climate change factors will combine to increase migratory pressures

Income differentials between rich and poor countries, disparities in educational levels and demography combine to determine migratory pressures (according to U.N. data and projections, the share of population in high-income—by and large OECD countries—has fallen from 32.2 percent to 17.9 percent since World War II while the African population is projected to double to 2 billion by 2040, though converging to a 2 percent per annum growth by the end of the century). Suppose then that recent migratory flows and trends in productivity growth follow those of the past two decades with Africa failing to converge towards the U.S. productivity levels while the EU converges, then the share of highly qualified emigrants in the African population would increase from 16 percent in 2000 to 20 percent by 2025, and 23 percent by 2050, while the African population continues to grow (a similar trend is projected for low-qualified persons). And because the EU15 is projected to catch up with the U.S., migratory pressure would be felt most strongly in Europe (see here).

Further migratory pressures related this time to climate change and attendant increases in conflicts can also be expected. Drawing on gridded data, satellite measurements, and longer time spans, the new climate-economy literature is producing increasingly convergent evidence from studies focusing on changes in weather realizations within a country or spatial area. Extreme temperature and precipitation are influencing economic agricultural output, labor productivity outcomes with persistent effects, especially in low-income countries. Though contested by participants in the recent fifth assessment report of the IPCC which concludes that scientific research on climate and conflict has produced mixed and inconclusive results, a recent analysis of 60 studies in a common framework finds strong causal evidence linking climatic events to human conflict across a range of spatial and temporal scales and across all major regions of the world (see here and here).

As a final exploratory exercise, consider the potential effects of the recent IPPCC projections of a 4 degree Celsiusrise in temperature expected by the end of the 21st century in the absence of aggressive mitigation. Then agricultural lands would be displaced by 1,000 km from the equator and sea level would rise another 70 centimeters by the end of the century, or about 3.5 times the rise in sea level over the past 150 years. This would put in jeopardy the 44 percent of world population currently living within 150 km from the coastline. Abstracting from other likely disastrous side effects (acidification of oceans, loss of biodiversity, possibility of life collapse), can we adapt to such changes? Since 72 percent of the population and 90 percent of world GDP is located on 10 percent of the Earth’s land, there is ample room for people to move if they are allowed to. Simulations from a two-sector spatial growth model combined with a standard model of climate change where production causes carbon emissions and global emissions show that the welfare effects of climate change would be small as production would relocate to newly productive lands. But suppose that a border were to be imposed at the 45th parallel north making migration between South and North impossible. Then while overall welfare change would still be small, distributive effects would be large as the North would gain twice, from higher productivity and from no reduction in wages as southerners would be excluded. With no migration allowed, polar regions would become twice as well off as equatorial regions in present value terms.

Globalization and national sovereignty in a changing climate

Our current post-World War II architecture of global policy coordination with full national sovereignty under the “triad”—the IMF, the World Bank, and the World Trade Organization and its precursor—was appropriate when the required policy coordination was among national economies that were only linked through trade and finance. In this structure, physical interactions between national economies in the form of external effects related to environmental issues were negligible. National self-determination could then be accommodated with economic globalization without giving up the prerogatives of the nation state. This is no longer the case. We stand on the threshold of the post-nation state world. Right now, the EU has yet to come up with a common policy towards the current human tragedy at its borders (Germany expects 800,000 asylum requests this year). Pressure from climate change is also building up relentlessly (for constant mitigation efforts, every lost decade to inaction calls for an upward revision of the temperature target by about 0.4 degrees Celsius). Dealing with increasing migratory pressures from economic factors and rising temperatures will require countries to delegate national sovereignty and accommodate far greater migration flows than in recent history, or face widespread conflicts.