Today, the U.N. has published a “clarification note” where it explains that the actual number for North-South climate finance may be closer to the lower bound of the $40-175 billion mentioned in its “Biennial Assessment and Overview of Climate Finance Flows” report. That report, released at the U.N. negotiations in Lima, Peru in December, was a landmark in assessing climate finance flows, and a valuable effort to support discussions during this pivotal year for global climate politics.

This is an important clarification. According to our own estimates, the actual number for North-South climate finance is clearly closer to $40 than $175 billion. The upper bound of the original U.N. estimate relied on a private climate finance number ($27-123 billion) in our paper “Difficulties in accounting for private finance in international climate policy,” which actually refers to all private finance in the global south that is “mobilized by developed country governments”(e.g. through carbon markets or development banks)—not private finance flowing North-to-South. That is an important difference. Estimates for North-South flows both in our paper and the last two editions of Climate Policy Initiative’s Global Landscape of Climate Finance are much lower than the figures cited by the U.N. report (see Figure 1). Our own 2013 estimate for North-South private climate finance flows was $10-37 billion, comprising foreign direct investment for renewable energy, recycling, and environmental technology manufacturing. 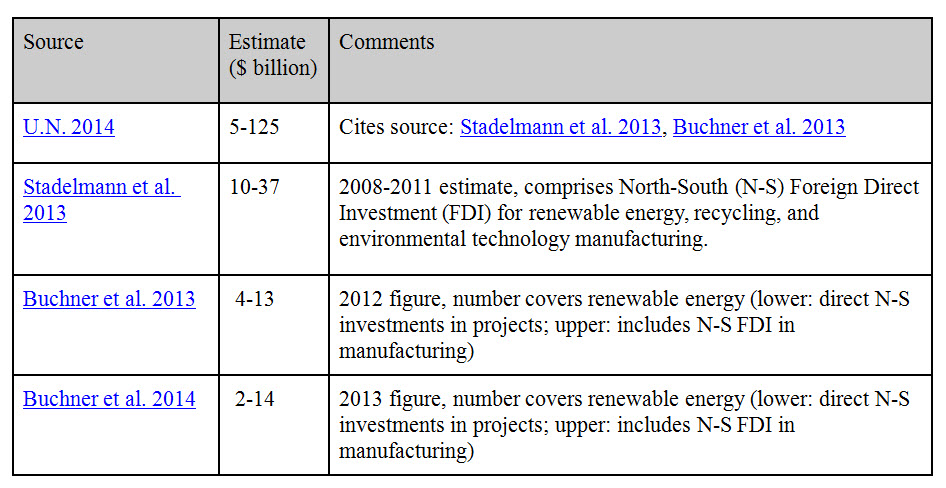 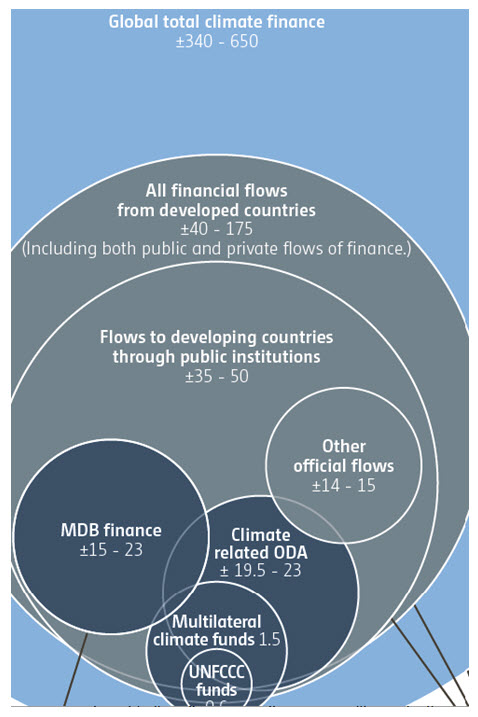 The consequences of confusion around climate finance numbers are illustrated by the articles and blogs around the world that reported on the U.N. committee’s figures. Reuters reported that “Those numbers suggest the world may not be as far off track in meeting the $100 billion goal as previously thought.” India’s Financial Express reported that a Finance Ministry official “refuted the numbers.” The leading Swiss newspaper Neue Zürcher Zeitung ran a front-page article citing the number.

Countries will meet in Paris at the end of this year to adopt a global climate deal and again, the progress towards the commitment of industrialized countries to mobilize $100 billion per year by 2020 will be a key part of the negotiations. What happens if industrialized countries communicate, based on North-South numbers released in the U.N. report, that they are already on track to meet their $100 billion commitment, or already past the goal? Efforts and negotiations during this critical year could then be misdirected. The international community might realize only years later not just that the $100 billion commitment may not be met, but also that they are far from the investment required to provide a decent chance of avoiding dangerous climate change. Analysis of the International Energy Agency shows that the additional investment needed for clean energy alone is at least $5 trillion through 2020.

Achieving clarity around these issues will not be easy. The Biennial Assessment and Overview of Climate Finance Flows acknowledges the profound methodological challenges in defining and measuring climate finance. Its summary begins by describing the lack of a common approach in this area: “The report encountered challenges in collecting, aggregating and analyzing information from diverse sources. For example, each of these sources uses its own definition of climate finance and its own systems and methodologies for reporting…”

The first steps in addressing a problem are identifying it and developing a plan to get on track, so we salute this report as a landmark for raising these crucial issues of accounting for climate finance. Three fundamentals are needed to improve clarity around these issues: (1) a clear definition of what “mobilized climate finance” is; (2) an adequate methodology to allow for monitoring and reporting private finance flows; and (3) an audit of private investments claimed, and their effectiveness in driving low-carbon and climate-resilient development.

At stake is whether climate finance can be a building block for an adequate agreement this year in Paris, and the fate of follow-up agreements in the years to come. The U.N. clarification opens the way for realistic planning during this crucial year.