Editors’ Note: One week after this post was originally published, President Benigno Aquino of the Philippines said that the United States must take action in the South China Sea if China takes steps towards reclaiming the Scarborough Shoal. Michael O’Hanlon updated this post on May 23 with a brief response, below. The original post appears in full after the break.

Predictably, some experts—as well as now the Philippines’ leader, President Benigno Aquino—are arguing that the United States should militarily prevent China from seizing the Scarborough Shoal, a disputed but basically worthless land formation in the open waters between the Philippines and China. The formation is admittedly three times closer to the Philippines than to China, but it is not important—and it is definitely not worth fighting China over. Loose talk of red lines and of the supposed need for the United States to “take military action” makes the problem sound far too antiseptic and easily manageable. In fact, any direct use of military power that resulted in the deaths of Chinese (or American) military personnel would raise serious dangers of escalation.

The United States does need to ensure access to the sea lanes of the South China Sea. And it should help protect the populated areas of any allied country, including the Philippines. It should not recognize Chinese territorial or economic claims to areas surrounding disputed (or reclaimed) land formations, even if China occupies some of these islets and other features. And it should consider proportionate responses in the economic realm to any Chinese aggression over the Scarborough Shoal, as well as the possibility of expanded and permanent U.S. military presence in the area. But it should not shoot at Chinese ships, planes, or troops over this issue. It’s just not worth it, and we have more appropriate and measured options for response if needed.

President-elect Rodrigo Duterte of the Philippines, known for his Trump-like rhetoric and supra-legal methods of reducing crime while mayor of Davao City on the island of Mindanao, is already causing consternation in many parts of the world. His previous tolerance for vigilantes as a crime-fighting tool, for example, is cause for concern.

But in other cases, we should relax and keep an open mind. For example, while The Washington Post editorial page has lamented that he appears willing to do a deal with Beijing—accepting Chinese investment in the Philippines while allowing China to enforce its claims to the uninhabited Scarborough Shoal in the South China Sea—that particular outcome may actually be good for the United States.

Let’s situate the Scarborough Shoal issue in broader context. In recent days, the United States sailed a major Navy vessel, the William P. Lawrence, within 12 miles of the Fiery Cross Reef, a land formation in the Spratly Islands of the South China Sea that China has transformed into a 700-acre artificial island. China objected strenuously. Meanwhile, everyone awaits the ruling of an international arbitration panel, expected later this spring, on whether China or the Philippines (or neither) is the rightful claimant to the Scarborough Shoal.

To be sure, the broad problem starts in Beijing; The Washington Post is not wrong on that basic point. Incredulously, invoking fishing histories from many centuries ago, China claims not only most of the shoals and sand bars and small islands of the South China Sea, and not only the surrounding fisheries and seabed resources, but the water itself. Its so-called nine-dash line, which encompasses almost all of the South China Sea—including areas much closer to the Philippines and Indonesia and other key countries than to China’s own territory—can be interpreted as a claim to sovereign ownership. Fears that it will declare an associated air defense identification zone further complicate the picture. 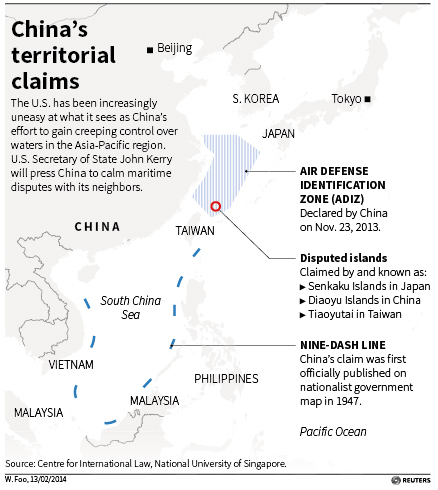 America’s aims are far less disruptive to the status quo. But of course, for America, the region is also much further away. In Chinese eyes, we already have our Caribbean Sea, and Gulf of Mexico—not to mention our extensive east and west seacoasts and other maritime domains. By contrast, China is largely hemmed in by land on three sides and Japan together with the U.S. Navy on the fourth. For Washington to deny China even a modest version of its own special waters strikes many in Beijing as haughty and hegemonic.

America’s aims are far less disruptive to the status quo.

Of course, the United States is making no claims of its own in the region. Nor is Washington trying to dictate outcomes on all disputes. Washington does not take a position on who owns the land features of the South China Sea. Nor does it oppose any plan for joint exploitation of the area’s resources that regional states can agree on. Nor can the United States, or any other country, be expected to let China restrict naval and commercial shipping maneuvers through this region, through which at least one-third of the world’s commerce traverses. Nor should Washington abandon treaty allies—most notably in this case, the Philippines—if they come under fire from Chinese warships (as has happened before). And in fairness to Filipinos, the Scarborough Shoal is much closer to their country than to China, by a distance factor of more than three to one.

Yet there is a problem in Washington’s thinking, too. Given the way rising powers have behaved throughout history, it is unrealistic to think that China wouldn’t seek to translate its greater economic and military strength into some type of strategic benefit. Yet Washington expects China to stop building artificial islands, to abstain from deploying military assets to the region, and to accept adjudication of disputes over territory by an international panel.

… it is unrealistic to think that China wouldn’t seek to translate its greater economic and military strength into some type of strategic benefit.

Many Americans would view any bending of the rules in Beijing’s favor as appeasement and thus an invitation to further imperialistic behavior by China. We have learned the lessons of World War II and the Cold War very well.

But it is also important to bear in mind the lessons of World War I, when great powers competed over relatively minor issues and wound up in a terrible conflict. Just as Germany had been largely shut out of the colonialism competition prior to 1914, making its leaders anxious to right what they saw as historical wrongs in advancing their own interests once they had the capacity, it is possible that China will refuse to accept the status quo going forward. By this alternative reading of history, our job should be to persuade China to be content with very minor adjustments to the existing global order—and to remind Chinese that they have benefited greatly from that order—rather than to oppose each and every small act of Chinese assertiveness as if it portended the first of many dominoes to fall. The good news in this case is that China is not challenging existing state borders, threatening established population centers, or using lethal force as a default instrument of state power. Its behavior is worrying, to be sure—but not particularly surprising, and by the standards of history, relatively benign to date.

With this perspective in mind, the United States should continue to insist on freedom of navigation in the South China Sea, and sail its ships wherever it wants, including within 12 miles of reclaimed islands. It should punish China for any future, limited use of military violence against a country like the Philippines by shoring up alliances, increasing forward U.S. military deployments, and imposing economic sanctions in concert with allies. But it should not itself use lethal force to directly respond to most small possible Chinese provocations or to evict People’s Liberation Army forces from disputed islands and shoals. It should tolerate some modest degree of expanded Chinese military presence in the area. And it should encourage regional friends to accept deals on joint economic exploitation of the region’s resources in which China would in effect be first among equals—though of course the exact meaning of that phrase would require careful delineation.

Its behavior is worrying, to be sure—but not particularly surprising, and by the standards of history, relatively benign to date.

Duterte’s willingness to do a deal with China would seem to fit with these criteria, without surrounding any substantial claims to Beijing, and without suggesting any weakening in its ties to the United States either. The Philippines shouldn’t concede meaningful economic resources in the waters and seabeds surrounding the Scarborough Shoal. But ownership and control of the land features themselves are a minor matter about which Manila might well usefully compromise.

The United States and China are likely to be jostling for position in the South China Sea for years. That is probably inevitable. It is also tolerable, if we keep our cool while also maintaining our resolve—and if we patiently look for an ultimate compromise on the issues that currently divide America and its regional friends from Beijing. Ironically, the strongman from Mindanao may help us along with this process.

How the war in Ukraine hinders US-Russian nuclear arms control