Even though winter was supposed to bring something of a lull, officials at the United Nations High Commission for Refugees (UNHCR) in Greece fear that the plight of refugees streaming into Europe is now poised to become much worse. As the first port of entry into Europe for hundreds of thousands of Syrians fleeing a brutal civil war, Greece is supposed to register all asylum seekers and arrange for orderly distribution of them throughout the 28-nation European Union.

But the Greeks, still suffering from economic depression, are woefully short of resources and totally incapable of handling even a fraction of the incoming refugee flows. Even now, with treacherous seas and bad weather, 2,000 to 3,000 people a day are trying to make the crossing from mainland Turkey to Lesvos, Chios, and a number of other islands as the first phase of their trek toward Europe. Despite a promise of 3 billion euros in aid, Turkey is scarcely doing anything to help staunch the flow. In January, there was a twenty-fold increase from a year ago in the number of refugees crossing from Turkey into Greece, and the prospect is that the tide will grow in the coming months. 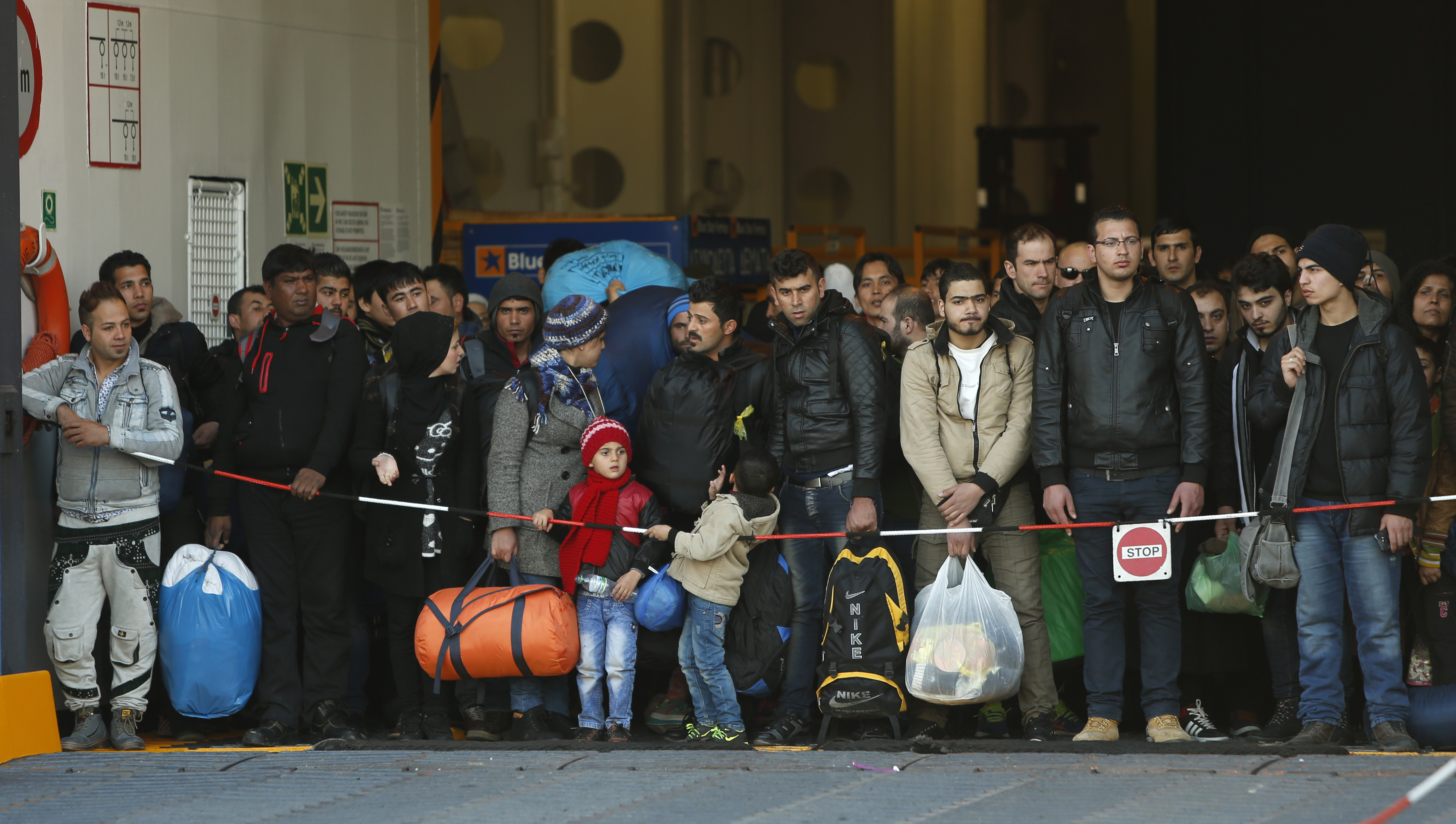 Refugees and migrants arrive aboard the passenger ferry Blue Star1 at the port of Piraeus, near Athens, Greece, January 31, 2016. Credit: Reuters/Darrin Zammit.

Only one of the five “hotspots”—designated sites where refugees are supposed to enter the EU—is now operating. This is on the island of Lesvos, the largest island in the eastern Aegean where more than half of the Syrian refugees usually land after the perilous journey from Turkey. The Greeks say they simply do not have the resources to set up other processing centers on the islands Samos, Leros, Chios, and Kos.

[T]he Greeks, still suffering from economic depression, are woefully short of resources and totally incapable of handling even a fraction of the incoming refugee flows.

Yet even on Lesvos, the situation is deplorable. During my recent five-day visit to Greece, there were two shipwrecks on the same day—they caused corpses, including tiny toddlers, to wash up on the shore. Volunteers carried the bodies to a makeshift morgue, where hundreds of other unclaimed bodies were stored. The UNHCR has pleaded to no avail with NATO and the EU to help by stepping up sea patrols since the Greeks and the Turks seem unable or unwilling to rescue or turn back the refugee boats. As a result, the death toll is growing. More than 3,770 people died in 2015 attempting to cross the sea into Europe, and UNHCR officials say January 2016 was the deadliest month since the refugee crisis began.

For those refugees who do survive the perilous crossing to the Greek islands, they are quickly dispatched by ferry to the port of Piraeus near Athens where they are taken almost immediately by bus to the northern Greek border with Macedonia. Last year, about 880,000 refugees arrived in Greece and Italy on their way north—about 80 percent of all those refugees who came to Europe. This year, the numbers are expected to continue growing at a fast pace. Until now, the relatively porous frontier with Macedonia has enabled the Greeks to send Syrian, Iraqi, and Afghan refugees through to their preferred destinations in Austria and Germany.

But now, under pressure from those governments who want to curtail the influx, the European Union is threatening to expel Greece from the Schengen treaty, which assures the EU’s passport-free travel zone. The EU also is proposing to send police forces to help Macedonia, which is not a member state, to bolster its defenses against refugee flows from Greece, which would in turn transform much of impoverished Greece into a vast archipelago of processing centers holding hundreds of thousands of refugees with no hope of finding work given the deplorable state of the Greek economy.

This was a fascinating if depressing trip that showed the futility and fecklessness of Europe’s efforts so far to deal with the burgeoning refugee crisis.

This was a fascinating if depressing trip that showed the futility and fecklessness of Europe’s efforts so far to deal with the burgeoning refugee crisis. By April, the crisis could reach catastrophic proportions that will trigger fear and panic across the continent. Right now, countries like Germany and Austria are absorbed by the challenge of how to provide accommodations for the refugees that are already there, as well as how to stem the expanded flow that they fear will start coming in the spring. The discussion of how to process, integrate, and find jobs for the refugees who have already arrived in Europe and show a willingness to assimilate has barely begun.

The blockade on Qatar helped strengthen its economy, paving the way to stronger regional integration