The Russian intervention in Syria launched a new and even more complicated phase in the Syrian civil war. The U.S. response to Russia’s bold move, according to critics and even many allies, has been dangerously listless. Observers have described the U.S. response as “flat-footed” or simply offering “no pushback,” a view which has only intensified since the Paris attacks. President Obama’s own rhetoric has consistently reinforced this sentiment of minimal pushback since the Russian strikes began, taking pains to emphasize that he has no intention of transforming Syria “into a proxy war between the United States and Russia.”

Despite such reticence, however, a closer look at U.S. policy reveals, for better or for worse, a subtle but more assertive U.S. reaction to confront what Washington perceives as a challenge from Russia. That challenge is not just about Syria, but also about the U.S. role in Middle East and the very concept of U.S. leadership abroad. The Russians have demonstrated this challenge both by striking directly at U.S.-supported groups on the ground in Syria (rather than ISIS or even the Nusra Front) and by combining their offensive in Syria with an outreach to the Sunni powers in the Middle East, including Saudi Arabia, Egypt, and Jordan, all traditional U.S. allies. The U.S. desire to avoid getting drawn into a proxy war with Russia in Syria is genuine. But this broader challenge tugs at the American impulse for leadership and demands a response. And there has been a response.

That reaction requires nuance. Too public or too forceful an approach risks sparking a broader conflict with Russia and sucking the United States into the Syrian quagmire. Too weak a response will play badly in U.S. domestic politics and reduce U.S. leverage with regional allies. The middle way seeks to challenge Russia indirectly, to capitalize on Russia’s many weaknesses in Syria, and to ensure that Russia cannot succeed there. It also looks to draw Russia into a diplomatic process that will offer Moscow a face-saving way out of the morass of Syria. 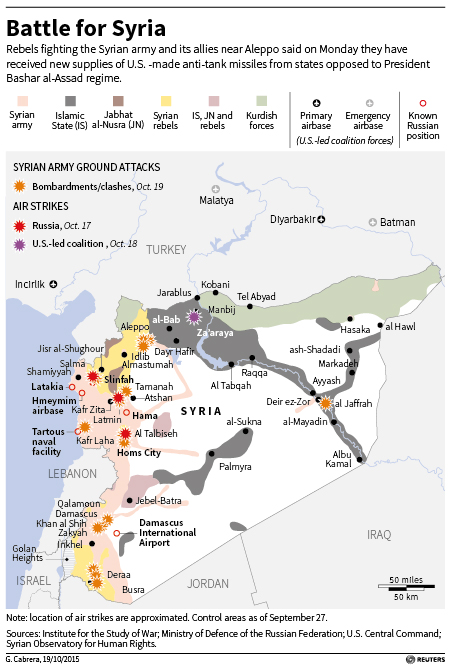 Inside Syria, the United States has quietly countered the Russian buildup to keep Russia from any major gains on the ground that could translate into leverage at the negotiating table. Indeed, it is remarkable, after over a month of sustained Russian air strikes and ground offensives by the regime and its allies, just how little ground has been gained and how little the military balance has changed. In very little time, the sense of impending regime victory provided by Russia’s dramatic moves has evaporated and the prospect of a quagmire looms.

The inertia on the ground has in no small part resulted from a clear counter-escalation. According to the Wall Street Journal, the United States and allies such as Saudi Arabia, Qatar, and Turkey have funneled arms into Syria in increasing quantities. Most important has been the dramatic increase in BGM-71 TOW (anti-tank) missiles. According to our colleague Charles Lister, there has been a nearly 850 percent rise in their use since the Russian intervention and they continue to be replenished. Commanders on the ground attest that TOWs have proven critical in blunting Russian-supported offensives. Many of the TOW missiles are probably provided by Saudi Arabia and other countries. But, as The New York Times notes, all of these states need at least tacit U.S. approval to ship such weapons to Syria.

At the same time that the United States is helping to ensure that Russia does not succeed in western Syria, it is seeking to up its game in the anti-ISIS war in eastern Syria and Iraq. This is sending a message to its regional allies and to Russia that the United States remains the critical extra-regional actor in the conflict. Since the Russian intervention, the U.S. government has announced it will put U.S. special forces on the ground for the first time, dropped 50 tons of ammunition to Kurdish fighters in northern Syria (despite vociferous Turkish objections), and provided air support for a major offensive toward Sinjar in Iraq as well as an offensive toward Raqqa in Syria.

The ISIS war and the Syrian civil war are often portrayed, even by U.S. policymakers, as separate struggles. But they are in fact closely intertwined. If the United States makes progress against ISIS in Syria and Iraq, it will relieve pressure on the non-ISIS Syrian opposition and free them to present an even greater challenge to the Assad regime and their external supporters.

And indeed, some of what the United States is doing in the name of the anti-ISIS war is only a very thinly-veiled challenge to Russia. The United States has also sent F-15Cs to Turkey officially to fight the ISIS war. But as David Axe of The Daily Beast notes, F-15Cs “only have air-to-air weapons, and ISIS has no planes. Which means the real adversary is Russia.” This puts Russia on notice that the United States will not concede the airspace over Syria to the Russians. At least, the Russians saw it that way, as they quickly announced their intention to deploy an anti-aircraft missile system to their base in Syria.

Meanwhile in Vienna, the United States has deployed its most fearsome diplomatic weapon: Secretary of State John Kerry. He has plunged full-force into a negotiating process that most analysts of the Syrian war see as hopeless. The Russian intervention has not brought the sides closer together or induced major concessions from supporters of the opposition. The biggest sticking point remains the question of Assad’s guaranteed departure, a U.S., Turkish, and Saudi demand to which Russia and Iran firmly object.

But seen from a broader perspective, the Vienna talks can serve U.S. purposes even if they do not produce any sort of agreement. They demonstrate the U.S. power to convene all sides and they provide a forum, when the time is ripe, for the Russians to seek a face-saving way out of what may become a Syrian quagmire.

In the meantime, the U.S. is seeking to alienate Russia from traditional U.S. regional allies. Consistent with this, the United States has been subtly promoting the idea that Russia is exacerbating the sectarian conflict in the region by siding with Iran and other Shiite forces. Russia has pushed back furiously at this notion, but it is starting to have wide currency in the region.

Indeed, symphonic harmonization is not a hallmark of U.S. foreign policy, under Obama or any other president. Nowhere is this clearer than in Syria. Obama has long made a habit of outlining a broad approach of masterly inactivity in Syria and then hedging against his own strategy by authorizing parts of the U.S. government to undertake more forward-leaning experiments. For this reason, the United States has long been more active in Syria than broadly understood. Thus, for example, the United States had only trained five Syrian rebels, but when the Russian airstrikes began they somehow managed to find more than enough U.S.-supported rebels to bomb.

And regardless of its actual coherence, Russia likely sees these American efforts as a response to their intervention. This is evidenced by their military engagement structured to face U.S. force and diplomatic maneuvering framed to counter U.S. rhetoric.

As a hedge, this response continually tests the possibility that the overarching U.S. strategy might need to change and serves to experiment with the means to improve it. True, this doesn’t pass any sort of test of strategic coherence. But it may serve the more prosaic purpose of countering the Russian challenge to U.S. leadership in the region, while avoiding the Russian mistake of getting sucked into an unwinnable war.

Ranj Alaaldin
Tuesday, May 17, 2022
Get daily updates from Brookings