Editors’ Note: Hammering out the political deal that has now brought Trans-Pacific Partnership (TPP) negotiations to a successful conclusion was a landmark achievement, but as Mireya Solis argues, there are still battles to be fought. This post originally appeared in Nikkei Asian Review.

The Trans-Pacific Partnership (TPP) deal that the United States and 11 other Pacific Rim countries struck in Atlanta today was five years in the making. More than once we heard that the end game had come, only to see deadlines pass us by as the negotiations continued to move at a frustratingly slow pace. The grueling work required to cinch this mega trade deal should not come as a surprise, however, given the sheer complexity of the negotiation agenda and the wide differences in the makeup of the participating countries.

Hammering out the essential political deal that has brought TPP negotiations to a successful conclusion is a landmark achievement. But we should not lose sight of the fact that more battles will need to be won before the TPP morphs from an agreement in principle to an agreement in reality. Success at the Atlanta ministerial, however, delivers immediate and portentous benefits. 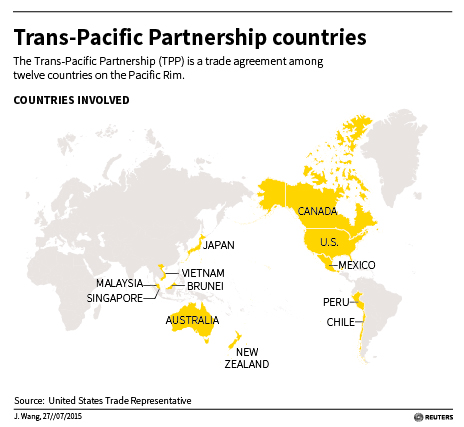 U.S. leadership: A balance between strength and flexibility

Central to American grand strategy has been updating the international economic architecture to match the realities of 21st-century economy and consolidating the critical role of the United States as a Pacific power as envisioned by the Asian rebalance policy. The TPP has long emerged as a litmus test of the American will and resolve to rise to these challenges in a world of fluid geopolitics. With success at the TPP negotiating table, the convening power of the United States—as demonstrated by its ability to steward the most ambitious blueprint for trade integration—has received an enormous boost.

But equally important is that in the final TPP deal, the United States has displayed another key trait of international leadership: flexibility. Critics of American trade strategy have frequently complained that the U.S. rigidly pushes for its own free-trade agreement (FTA) template without incorporating the preferences of its counterparts: that de facto, the United States does not “negotiate” in trade negotiations. But the set of final compromises that enabled the TPP deal to be struck at Atlanta shows a different picture, one that in fact makes U.S. leadership more attractive and the TPP project more compelling.

The TPP project is still a promise, not a reality.

In endorsing the principle that TPP countries can opt out of investor-state dispute settlement in their public regulation of tobacco products, and in adopting a hybrid approach that will give up to eight years of data protection for biologic drugs, the United States has shown the strength to compromise without surrendering high standards. In turn, these negotiated compromises cast a favorable light on the TPP as a collective endeavor with a commonality of purpose among founding members: to ensure that protection of foreign direct investment does not hinder public health regulations; and to both promote innovation and access to medicines.

The trade regime has not had a success of this magnitude for the past two decades. Rather, the list of failures and missed opportunities is long, and the prospects of the Doha Round are dim at best.

In powerful ways, the TPP revives a stagnant trade regime. It shows that mega trade agreements can offer a platform to devise updated rules on trade and investment that cover sizable share of the world economy. And it creates an incentive structure for concurrent trade agreements to aim higher if they want to remain competitive.

A genuine re-launch of Abenomics

After a bruising political battle to secure passage of the security legislation, Prime Minister Shinzo Abe announced that the economy would be his utmost priority. In so doing, he disclosed three fresh arrows: a strong economy, raising the fertility rate, and boosting social security to care for the elderly.

Abenomics 2.0, however, has fallen flat, as it lacks specifics on how to achieve the target of 600 trillion yen GDP, and because subsidies for young families and the expansion of nursing homes, while desirable and politically popular, do not make for a strategy of economic revitalization. Instead, the TPP deal boosts Abenomics 1.0 where its true transformative power lies: structural reform.

An informed debate on TPP

After legal scrubbing, the TPP text will be released. This will offer the much-needed opportunity to debate the merits and demerits of the agreement with facts, and not speculation. Full disclosure of the agreement, close public scrutiny, and a spirited discussion on where the agreement has lived up to expectations and where it has fallen short will be essential in shoring up public support.

The TPP project is still a promise, not a reality. Another set of milestones will be required (twelve, to be exact). Each participating country has its own domestic procedures for ratification, and some definitely face an uphill battle: Malaysia is gripped by a major political crisis as Prime Minister Najib Razak fights charges of corruption; and it is anyone’s guess what the electoral results in a couple of weeks will mean for Canada’s place in the TPP.

For the United States too, the quest for TPP ratification could not come at a more complicated time with a full-blown presidential election race. In wrapping up the TPP negotiations, the United States has demonstrated its leadership in convening a significant and diverse group of countries and in stewarding with success the negotiation of an ambitious blueprint for economic governance. But this will mean little if TPP is voted down in Congress or stays frozen in ratification limbo. Without the power to deliver a TPP in force, past accomplishments will rightfully be brushed aside.

Challenges for the Biden administration: Addressing the evolving air and missile threat

The post-Trump reconstruction of America and the world