It was very different then, and yet it is all so similar.

In 1938, the refugees were mostly German Jews, squeezed out of their country—where many had lived for hundreds of years—by a cruel Nazi policy of judenrein, cleansing the region of Jews. Of Germany’s 600,000 Jews, about 150,000 had already fled from home and country, victims of a widening Hitlerian pogrom. When Germany annexed Austria in March of that year, another 185,000 Jews left there, many seeking entry into neighboring countries or visas to the United States.

They were to be disappointed. Doors were shutting, not opening. And, after Germany absorbed the Sudetenland and then all of Czechoslovakia, another 300,000 frightened Jews joined the ranks of suddenly rootless refugees, none knowing yet that soon Adolf Hitler would launch his “Final Solution to the Jewish Question,” as it was to be called, and that six million Jews would be killed during World War II, which was just around the corner. So, what to do? Where to go?

Across the Atlantic was the United States, viewed in Europe (especially by the refugees) as a haven for the homeless and oppressed, as a place perfect for those seeking religious freedom. Surely, it was felt, if such a powerful president as Franklin D. Roosevelt knew about the spreading refugee crisis in Europe, he would act. He would raise quotas. He would open the door to America and encourage other nations to open theirs.

Unfortunately for the refugees, this proved to be an illusion. Roosevelt, of course, knew about the refugee crisis in Europe, but he also knew about Congress’ reluctance to raise existing quotas on Jewish immigration. In those days, anti-Semitism and isolationism were entrenched in American culture and politics, and Roosevelt was clearly not ready to fight Congress on quotas or to stand as the champion of oppressed European Jews.

However, he did not wish to appear indifferent to the problem—he was under pressure to do something. But what? He decided to do what Washington politicians have often done in a pinch—he set up a committee, in this case an international conference, to study the problem and, perhaps, come up with a solution. He wanted to appear to be the leader of a global effort to help European Jews—for the United States to strike the right pose, to suggest an open door policy, while realizing at the same time that he would not fight to raise quotas for European Jews. The American door would remain closed. Let others open their doors, he hoped.

The conference formally opened in mid-July, 1938, in the French resort of Evian-les-Bains. Representatives from 32 nations, plus 39 private organizations, gathered for 8 days of speeches, meetings, and grand displays of good will. More than 200 journalists covered the event. It was a big deal.

The U.S. representative was not a well-known diplomat—he was a businessman, Myron C. Taylor, whose major credential was that he was one of the president’s close friends. His speech, like many of the others, flowered with humanitarian appeals but contained no new ideas. He was very cautious, as if he were walking on eggs.

Taylor went only so far as to assure his colleagues that the annual immigration quotas of 30,000 for Germany and Austria could include Jewish refugees. Great Britain agreed to accept a few thousand German Jews. Australia said it would accept 15,000 over three years. Reflecting the opinion of many delegations, the Australian representative, T. W. White, explained: “As we have no real racial problem, we are not desirous of importing one.”

But the food was superb, and the vistas breathtaking, and everyone tried to exude good will. In fact, if success could be measured by good will alone, the Evian Conference would have been judged a roaring success. But day after day reporters sensed a failure all but inevitable. By the end it was clear to everyone, not just to the reporters, that little had been accomplished. Hopes had been raised, and then dashed. The Evian Conference went down in history as a complete flop. Only one nation, the Dominican Republic, agreed to accept 100,000 refugees.

Hitler, not known for his humor, was supposed to have joked: “We…are ready to put all these criminals at the disposal of these countries,” adding: “for all I care, even on luxury ships.” In Hitler’s lexicon, apparently all Jews were “criminals.” 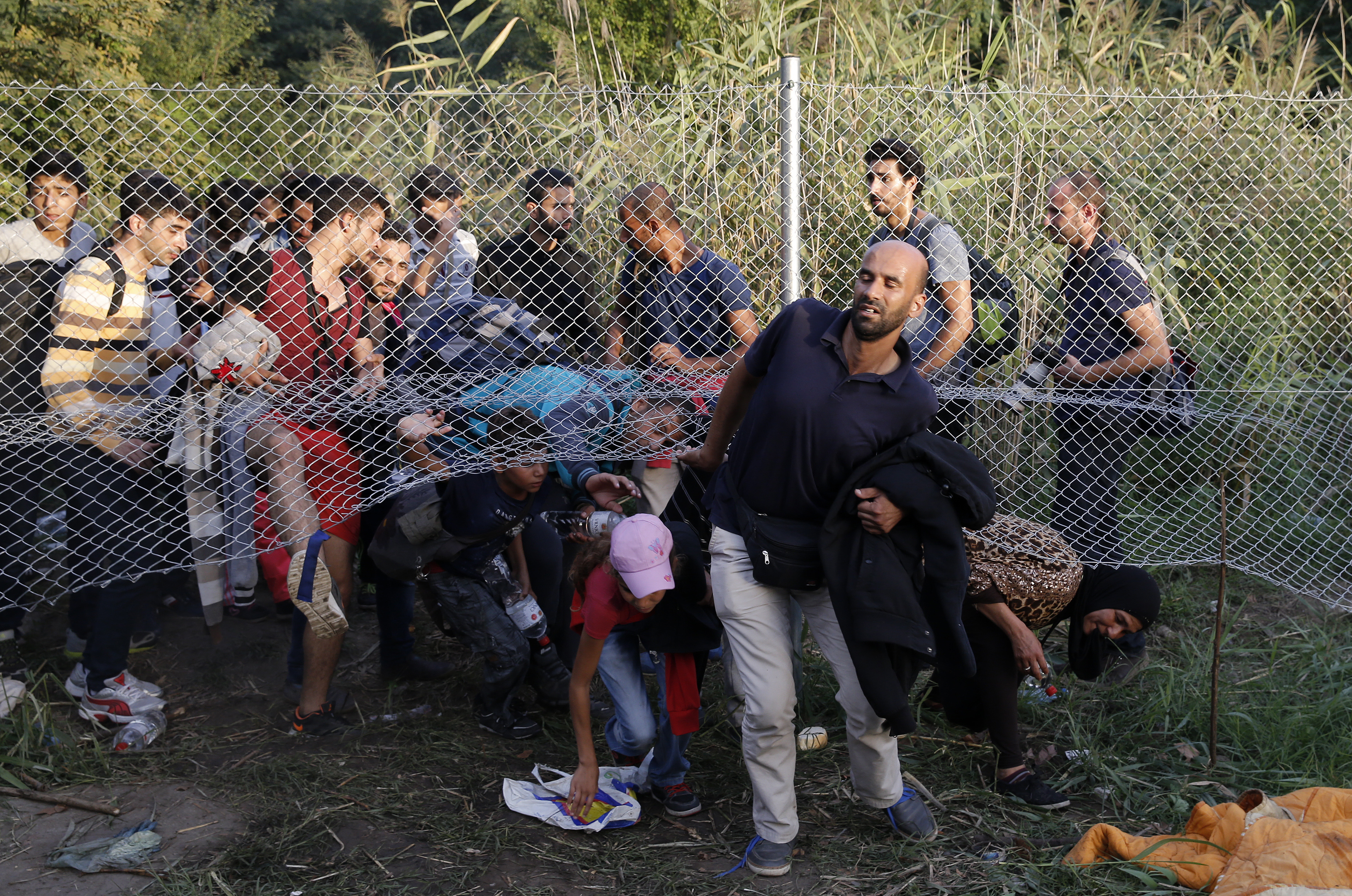 REUTERS/Marko Djurica – Migrants pass under a highway security fence as they try to find a new way to enter Hungary after Hungarian police sealed the border with Serbia near the village of Horgos, Serbia, September 14, 2015.

Now, for different reasons, tens of thousands of refugees are again filling European roads and waters. This time, they are mostly from Iraq and Syria, torn apart by four years of civil war. They are Muslims, seeking a better life in a largely Christian Europe. Germany and Sweden are often their ultimate destinations, but getting there has been a nightmare. Hungary has blocked their path, building a barbed wire fence and firing tear gas at the increasingly desperate refugees. There have been casualties, so far not many. A number of besieged European leaders, led by German Chancellor Angela Merkel, have promised to help the refugees, even while facing growing political opposition. Pope Francis has appealed to Catholics, with mixed success, to open their homes and churches.

The European Union has been grappling with this crisis for weeks. First, what to do with the roughly 120,000 refugees who have recently arrived in Europe? And, second, what to do with the roughly 500,000 refugees who are footloose or in makeshift camps in Europe? The EU is desperately trying to manage the immediate problem of the 120,000 refugees. The second problem can wait. The ministers have agreed on a tentative and controversial plan, which requires summit-level approval. Despite the refusal of four nations—Romania, the Czech Republic, Hungary and Slovakia—to accept any of the refugees, the other member states have expressed a willingness to accept different numbers of refugees. Germany, for example, would accept 40,000; Spain, 20,000; and the others many fewer.

Maybe some final agreement on all the refugees could yet be achieved at another summit in Evian, France. The food is still superb, the vistas still breathtaking. Perhaps, this time, they will be inspired to look beyond their narrow national interests, and finally help people in acute need. Maybe the failed Evian Conference of 1938 can prompt the Europe of today to do the right thing.

60 years later, can France and Germany fulfill the ambitions of the Treaty of Élysée?