NATO has been the foundation of transatlantic security for nearly 70 years. Its founding treaty, which declares that an attack against one member is an attack against all, embodies the most sacred commitment that one country can make to another. That commitment was the principal source of Western unity in the long struggle against the Soviet Union. And its promise was a critical element in the democratization of Eastern Europe after the collapse of the Warsaw Pact. But now, even as Russia under President Vladimir Putin appears to present a renewed security threat, European publics appear very ambivalent about NATO commitments.

Such was one of the core findings of a Pew Research Center study released on June 10. Brookings hosted the launch of the survey, with remarks from Pew’s Bruce Stokes and Katie Simmons. Pew interviewed over 11,000 people—in Russia, Ukraine, and eight NATO member countries (Canada, France, Germany, Italy, Poland, Spain, the United Kingdom, and the United States). It found that Europeans in NATO member states aren’t particularly committed to upholding Article V of NATO. This, as moderator Michael O’Hanlon of Brookings pointed out, reveals shifting understandings of the NATO alliance and its responsibilities.

Indeed, in key European states such as Germany, France, and Italy, at least half of respondents said that their country should not use military force to defend a NATO ally if attacked by Russia. Even normally steadfast Poland could not quite muster a majority in support of the use of force to defend its neighbors. Among Americans and Canadians, meanwhile, despite their greater distance from the threat, support for Article V remains generally strong. They were the only nationalities surveyed in which more than 50 percent of respondents thought their country should take military action if Russia attacked a NATO ally. 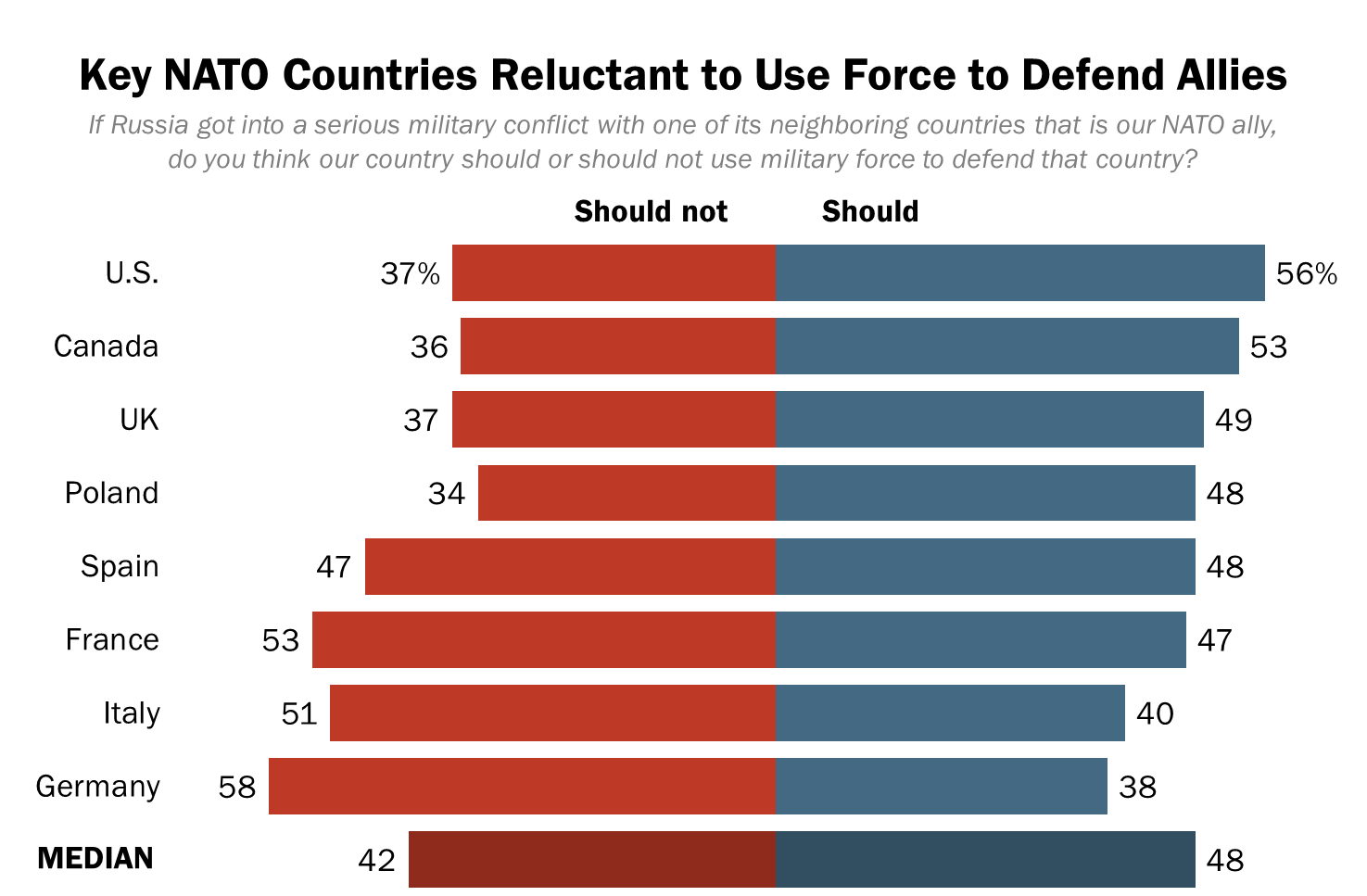 There is little reason to believe that this view reflects complacency about Russia. The survey found that publics generally blame Russia for the ongoing conflict in Ukraine and view Russia as a military threat to other neighboring states. Rather, the issue is that European publics appear to view the military defense of the alliance as a specifically American job. Pew found that publics in all NATO member states are more likely to think the United States will defend a besieged ally (median of 68 percent) than to be willing to do so themselves. This suggests that European publics believe that the U.S. remains the primary guarantor of the continent’s security.

This perception sits uncomfortably with the Obama administration’s aspirations for its allies’ role in European security. In a more contested world that America can no longer dominate, the United States is undertaking a fierce effort to husband its resources and prioritize its commitments. President Obama’s ambition has been to disengage from wasteful conflicts in the wider Middle East and refocus American attention and efforts on the Asia-Pacific. In American eyes, Europe’s role in the new transatlantic bargain should be to facilitate this rebalancing by taking up the slack and by assuming more responsibility for stability and security in its own backyard.

Does this lack of European popular commitment to NATO really matter? Most policy decisions don’t go up for a popular vote, of course. While the Pew poll shows that American and German publics disagree pretty starkly on a range of issues, their governments tend to be in closer agreement and have cooperated very effectively on the issue of Russia of late. All of the European—and especially German—public frustration with the United States, on issues ranging from trade to spying, seem to have had little effect on the ability of their governments to cooperate. 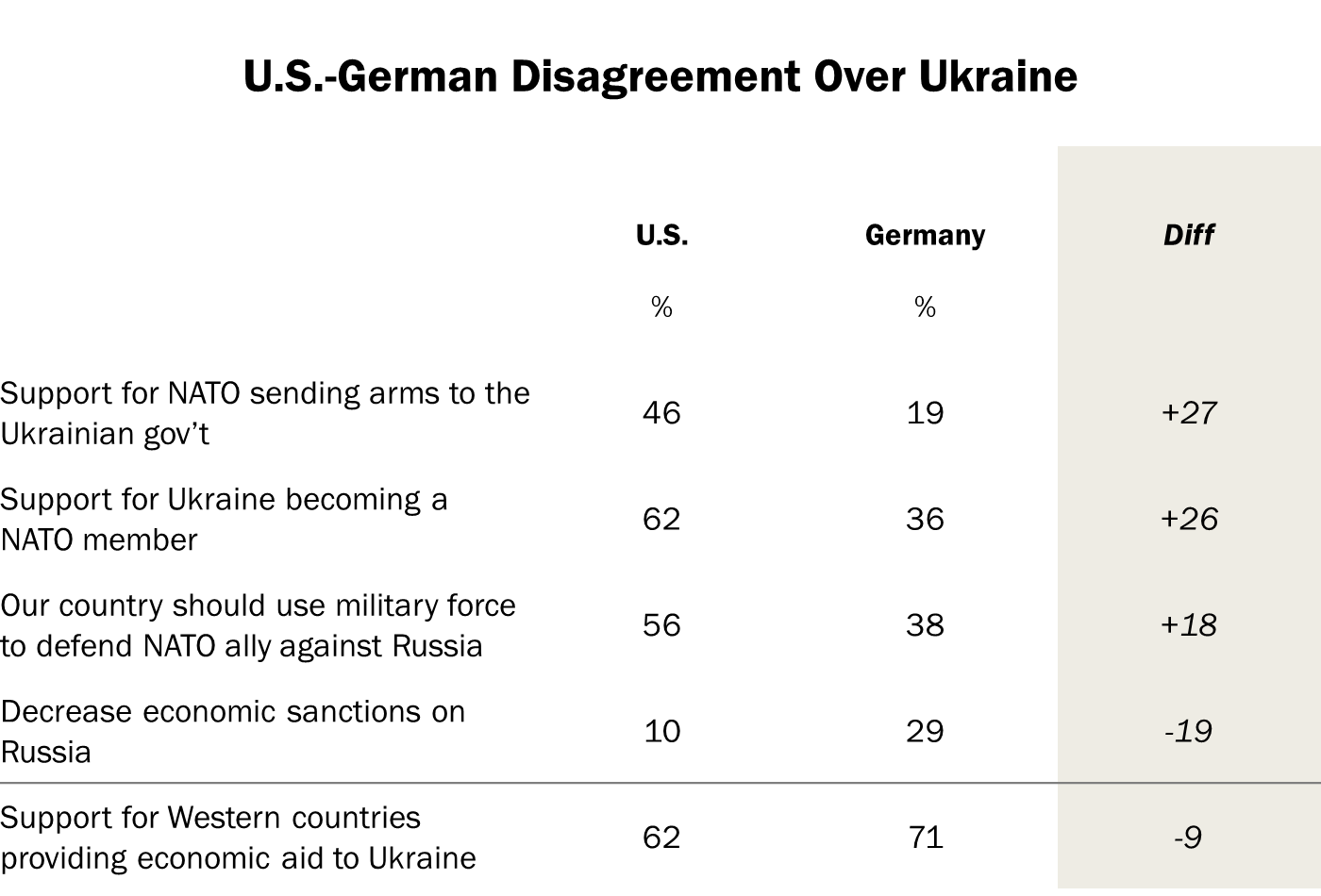 But as Benjamin Page and Marshall Bouton have written, a “lack of public support for official foreign policy can send bad signals to international adversaries, constrain policy choices, upset policy continuity, and destabilize political leadership.” In crises, such as that over Ukraine, European governments cooperate well with their American counterparts. But in the longer-term, the views of their publics mean they are politically constrained from the military spending and deployments that could provide reassurance to NATO’s eastern members.

The findings of the Pew poll will make NATO’s Baltic members even more nervous. NATO leaders will want do their best to reassure them that the commitment is ironclad. But predictably, it seems to be America that is doing the reassuring. U.S. officials just this weekend announced a proposal to preposition heavy weapons into several Baltic and Eastern European countries. So one can well understand why European publics assume that Americans will continue to bear this security burden for them.

But continuing to leave European security to the United States is a dangerous strategy in a more multipolar world. At best, it risks condemning major European states to geopolitical irrelevance, forcing them to accept a host of American policies that their publics increasingly dislike. At worst, it ignores that demands on American resources in other parts of the world, as well as America’s own domestic political constraints, mean that the United States may fail to provide sufficiently for European security. It is hard to believe that this is really what European publics want.

Russia’s draft agreements with NATO and the United States: Intended for rejection?

It’s time for the West to engage with the Taliban