Will McCants: ISIS-claimed attacks in Paris, Beirut, and Egypt indicate the organization wants to take the fight to its enemies abroad. One reason might be that all is not well in ISIS-land. The nascent state in Syria and Iraq has lost around 25 percent of its territory and tens of thousands of fighters in the year since America and its allies began to their campaign to defeat it. While the state still endures for now, it’s under tremendous pressure because of the costs of ceaseless war.

To explain the troubles ISIS faces at home, we have invited a group of scholars to comment on its governance over the past years and speculate on what they might face in the year ahead. First was Mara Revkin, who examined how opinions towards ISIS have changed since it captured Mosul more than a year ago.

Next up was Aymenn al-Tamimi, a Jihad-Intel research fellow at the Middle East Forum, who argued that internal documents show increasing challenges for the Islamic State.

This time, we’ve asked Aaron Zelin, the Richard Borow Fellow at the Washington Institute for Near East Policy, to weigh in with a historical perspective.

Aaron Zelin: Attempts by salafi-jihadis to create states or govern territory are not a new phenomenon. Even for the Islamic State (IS), this is its second attempt at establishing a state and governing territories it controls. What sets it apart this time is the level of planning, sophistication, and capabilities compared to ten years ago.

Unlike the prior pieces in this series by Mara Revkin and Aymenn al-Tamimi, I hope to present a historical perspective on IS governance, since I do not think one can be separate from the other.

In October 2006—when the Islamic State of Iraq (ISI) was declared—the leader of al-Qaida in the Land of Two Rivers (better known as AQI), Abu Ayyub al-Masri (Abu Hamza al-Muhajir) pledged allegiance to the new self-declared leader of the faithful, Abu ‘Umar al-Baghdadi. In a January 2007 book, ISI’s Shaykh ‘Uthman ‘Abd al-Rahman al-Tamimi explains the rationale for declaring the state. In it, he also outlines the state’s responsibilities for areas it controls: prosecuting criminals and sinners, implementation of the hudud (fixed punishments in the Qur’an and Hadith), mediating and resolving conflicts, providing security, distributing food and relief, and selling oil and gas.

Although it called itself a state, the Islamic State of Iraq controlled only small amounts of territory, for limited periods of time—in no small part because of the American military occupation, but also due to insurgent and tribal competition for power. It attempted to show a veneer of legitimacy by establishing a cabinet of ministries in April 2007 and September 2009. Because of ISI’s limitations, it was nearly impossible to resolve conflicts, provide security, distribute food and relief, or sell oil and gas. Instead, it fell back on mostly only instituting hisba (moral policing) activities and targeting enemies as murtadin (apostates) and therefore legitimate to target and kill. Ten years ago, therefore, ISI did not live up to its own standards of governance excellence.

Ten years ago, therefore, ISI did not live up to its own standards of governance excellence.

ISI killed and kidnapped leaders from prior allies—such as the Islamic Army of Iraq, Ansar al-Sunnah, and other insurgent factions—because they were unwilling to pledge allegiance to al-Baghdadi. It required female residents to wear the niqab, burned down beauty salons and stores selling music, flogged individuals for drinking alcohol or smoking cigarettes, and banned barbers’ use of electric razors. ISI also banned positioning certain fruits next to one another at markets out of concerns over sexual innuendo, as well as banned the local bread (samun) and the use of ice. In town after town, this precipitated what eventually became known as the tribal sahwa, or awakening. That, along with the U.S. military surge in Iraq, tactically defeated ISI by 2009.

Towards a second state

Since ISI was only tactically and not strategically defeated, it used the American drawdown of troops that ended in December 2011, Sunni grievances with the Nouri al-Maliki regime in Baghdad, and most importantly the battlefield next door in Syria to rebuild its infrastructure and capabilities. As I noted in March 2013, a month before it changed its name to the Islamic State of Iraq and al-Sham (ISIS): “Through sectarian rhetoric, [ISI] will use the Syrian fight to try and gain more recruits in Iraq and redeem itself for its lost opportunity last decade.” Indeed it did. This time proved much different than a decade earlier. It also had a provisional position paper that outlined how it sought to take over territory and govern.

Prior to the infighting that began in January 2014 between ISIS and revolutionary, Islamist, and other jihadi factions in Syria, there was an understanding among the different insurgent forces against the Assad regime. As a consequence, ISIS was able to embed itself within the broader anti-Assad coalition even if other factions were wary of it—unlike now, when IS has pariah status. From April 2013 to January 2014, ISIS’s main focus was to present itself in a positive light to the Syrian population through da’wa (missionary) forums and by providing services. It also conducted softer moral policing, such as burning cigarettes or confiscating alcohol. But similar to a decade ago, it also killed other leaders from Syrian insurgent factions, prompting backlash. ISIS was pushed out of Latakia, Idlib, and parts of Aleppo governorates between January and March 2014.

This led to ISIS’s independent consolidation of territory farther to the east in the Raqqa governorate and parts of Dair al-Zour governorate. It is also when more harsh punishments began to appear, such as cutting off hands for robbery or crucifying alleged apostates. In this period, ISIS also sought to appear as a state-like entity, showing off its various administrative departments including its da’wa offices, shariah courts, religious schools, police stations, and local municipalities, among others. It was an uneven process across its proto-wilayat (provinces) until its June 2014 declaration of the Caliphate, when ISIS changed its name again—to IS.

Since then, based on my review of thousands of IS media releases, a pattern emerged in IS attempts to expand, take over new territory, and consolidate its control. IS’s systematizing, bureaucratizing, and formalizing its governance structures allow it to operate consistently and in parallel across its various wilayat. This governance model can equally be applied in its core territory of Iraq and Syria as well as various other provinces. It is far more advanced than its prior incarnations, let alone al-Qaida branches (the closest instance being al-Shabab in Somalia).

IS’s systematizing, bureaucratizing, and formalizing its governance structures allow it to operate consistently and in parallel across its various wilayat.

My research demonstrates that IS state-building exhibits two stages: pre- or partial territorial control and full territorial control. Within these two categories are five phases of establishing control: intelligence, military, da’wa, hisba (consumer protection and moral policing), and governance. Although hisba would generally be considered part of IS’s governance apparatus, I separated the two—this helps distinguish the level of advancement and sophistication associated with meting out justice, versus that associated with actual services, administration, and economic activity, since the former is easier to implement than the latter. More details with specifics and case studies can be found here. 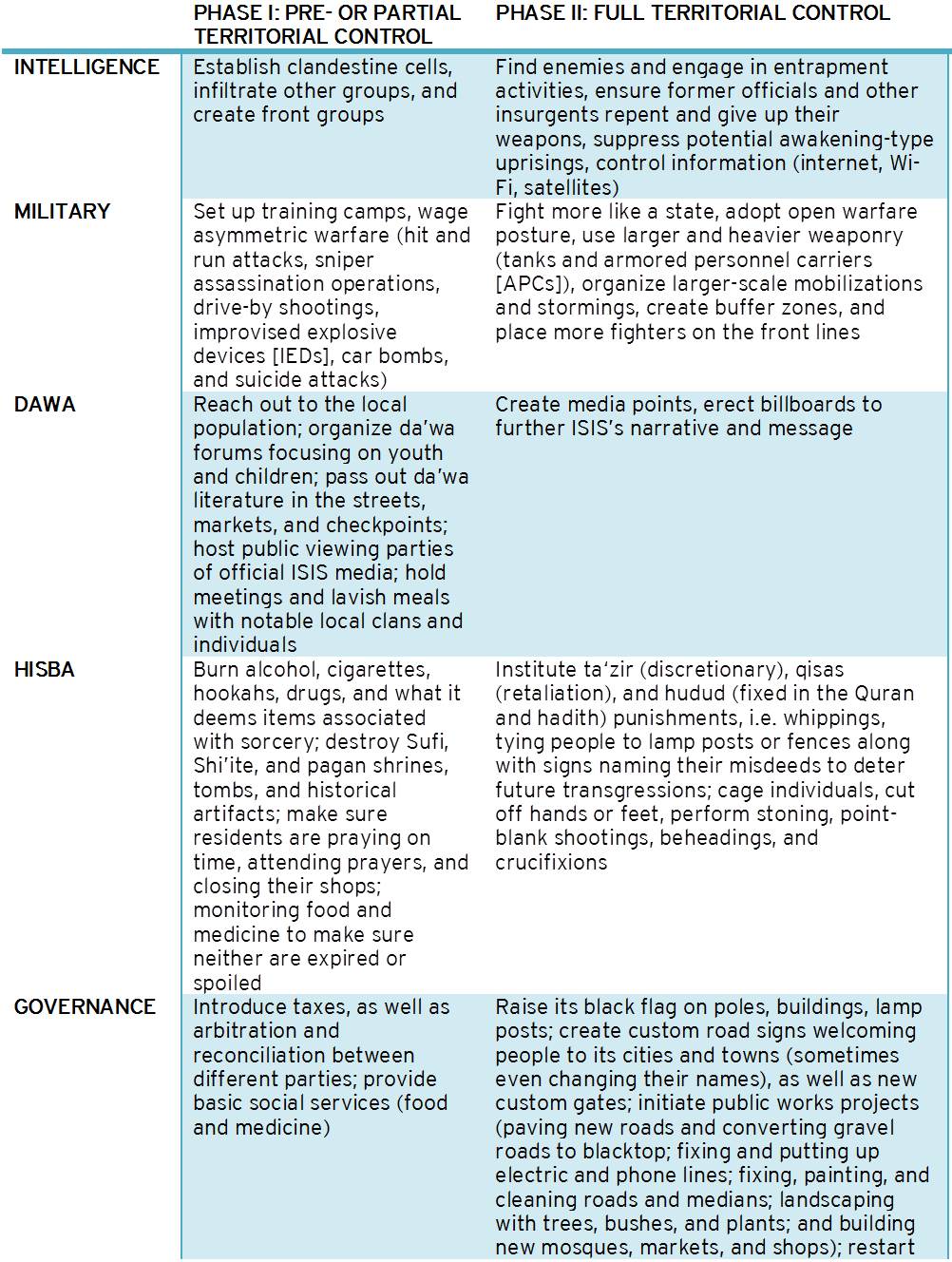 When compared with its first state as ISI and its building toward a second state as ISIS, the post-June 2014 IS structures, plans, and implementation are far superior.

When compared with its first state as ISI and its building toward a second state as ISIS, the post-June 2014 IS structures, plans, and implementation are far superior. Further, depending on the date and the particular province, IS did live up to its own standards of governance. That’s not to legitimize it, but rather to understand it on its own terms. This increased efficacy illustrates the organization’s ability to learn from past experiences. It also suggests that IS may apply lessons learned as more of its governance plays out in areas outside of Iraq and Syria—especially in Libya, but possibly even in Yemen or Afghanistan in the future. New knowledge will sharpen IS’s thinking and continue its growth and evolution as well as shorten its learning curve.

Therefore, aspects of the IS model could shift in the future. Moreover, since the American-led airstrikes began, its capabilities have been slowly diminished. As a result, it is currently difficult to determine whether IS is living up to its standards anymore.

Moreover, since the American-led airstrikes began, its capabilities have been slowly diminished. As a result, it is currently difficult to determine whether IS is living up to its standards anymore.

Similar to IS, al-Qaida is in the process of learning lessons from the governance experience of the ISI in the mid-2000s. It is also looking back on its first attempted cases of governance activities by its own branches in the past several years in Somalia, Yemen, Mali, and Syria. Unlike IS, al-Qaida is attempting to root itself into local insurgencies in Libya, Syria, Yemen, and Mali, and not play a monopolizing role (at least for now). The second governance attempt by al-Qaeda in the Arabian Peninsula (AQAP) is still in its infancy, but its performance will provide more answers about the evolution in al-Qaida’s thinking on governance and how it differs from IS’s second governance attempt.

The establishment of jihadi governance projects are a new normal. For now, it’s clear that IS has set a higher standard when compared to its earlier attempt a decade ago and to al-Qaida’s present governance. But the question going forward is whether either IS’s or al-Qaida’s models (or both) will be able to self-sustain in the long-term as they continue to incorporate lessons learned.