Recently, the publication of devastating photographs portraying Syrians’ attempts to seek asylum in Europe focused worldwide attention on the need to resettle some four million refugees displaced by the country’s four-year long civil war. “Red lines” and humanitarian rhetoric aside, the United States has admitted only 1,600 Syrian refugees since the onset of the civil war. Now, the Obama administration says it will increase its yearly target for refugee resettlement to 100,000 per year by 2017, promising that 10,000 of the refugees admitted this year will be Syrian. Usually a low-profile policy field, U.S. refugee quotas have suddenly become a subject of debate among 2016 presidential hopefuls, with Hillary Clinton, Donald Trump, and others weighing in.

Accounting on average for two-thirds of UNHCR’s annual global resettlement, the United States Refugee Admissions Program (USRAP) is the world’s largest third-country resettlement scheme. Yet the U.S. government’s erratic attention to the Syrian refugee crisis begs the question: what drives the seemingly capricious system of U.S. refugee resettlement? And what can past refugee crises teach us about prospects for resettling Syrian refugees?

Due to simple geography, the United States has historically exercised much greater control than European states over refugee flows from Asia, Africa, and the Middle East. While Europe struggles to find solutions for refugees already crowded in train stations and at border crossings, the United States relies overwhelmingly on overseas processing of refugee claims, allowing it to manipulate refugee flows to political advantage.

Due to the admissions quota system, a refugee’s nationality is the single most important factor determining his or her chances of achieving U.S. resettlement. These yearly quotas reflect an administration’s perception of the strategic benefits of resettlement, which range from shaming the refugee-producing state to forestalling the spread of conflict via potentially militant refugees. Resettlement programs during the Cold War prioritized asylum seekers from communist countries in Eastern Europe and Asia, for example, while admitting few refugees from larger and more deadly conflicts in the Middle East and sub-Saharan Africa.

Perhaps most importantly, U.S. resettlement levels tend to correlate negatively with U.S. military engagement in a particular sending state. It was not until after the U.S. withdrawal from Vietnam that America began the process of resettling some 322,000 Indochinese refugees. Likewise, resettlement from Afghanistan decreased significantly after the 2001 U.S. invasion.

Yet the refugee crisis most comparable to Syria’s remains the mass displacement caused by the Iraq war ten years ago. From 2003 to 2007, the United States accepted on average 500 Iraqi refugees per year—similar to recent levels of Syrian resettlement, and fewer than during the 1990s, when the United States resettled some 30,000 Iraqi opponents to Saddam Hussein’s regime.

During the early years of the Iraq war, the Bush administration focused little public attention on the refugee crisis—a strategy, humanitarian advocates charged, meant to shield the American public from the increasingly dire human consequences of Operation Iraqi Freedom. Funding followed suit: in 2007, the United States spent just under $200 million on displaced Iraqis—less than the $280 million spent per day on the Iraq war. Early statements from the administration labeled Iraqis residing in neighboring countries as “insurgent terrorists.” The post-9/11 security protocols established for migrants of Middle Eastern and Central Asian origin were so exhaustive, and the percentage of Iraqis deemed “inadmissible” on security grounds so large, that monthly UNHCR referrals of Iraqis to the United States outpaced U.S. admissions by factors in the thousands. In May of 2007, UNCHR referred 3,110 Iraqis for U.S. resettlement; the United States resettled just one. 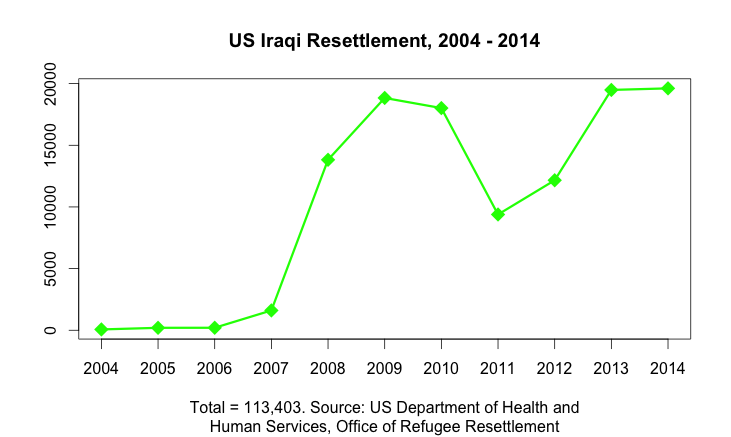 Graph generated by the author.

By late 2007, when journalists and NGOs finally focused U.S. public opinion on the Iraqi refugee crisis, millions of Iraqis had already fled to neighboring countries. They lived in conditions similar to those facing today’s Syrians: camps and substandard housing, children unable to attend school, adults unable to work legally. Although refugee conditions varied dramatically from country to country, marginalization was the norm. (Perhaps ironically, Syria in the early years of the Iraq war adopted some of the most accommodating policies in the region, as Iraqis were able to rent apartments and to access state healthcare facilities.)

Pursuing U.S. resettlement was broadly considered, among Iraqis, to be a waste of time.

As a student in Syria in 2007, I spoke with Iraqis who queued daily in interminable lines at the UNHCR, hoping to be pre-selected for resettlement to Sweden and Australia, two of the leading countries in Iraqi admission at the time. Pursuing U.S. resettlement was broadly considered, among Iraqis, to be a waste of time. Citing a lack of assistance from the international community, Syria and Jordan began imposing strict visa requirements on Iraqis, making it even more difficult for displaced persons to escape the civil war.

Meanwhile, American public opinion surrounding the Iraqi refugee crisis began to turn, with refugee advocates arguing for a special U.S. responsibility to Iraqi refugees and leading members of the newly Democratic Congress more closely examining the war’s humanitarian fallout. The refugee issue was front and center. Director of Human Rights Watch’s Refugee Division Bill Frelick told Congress in late 2007: “Band-aid assistance and token resettlement might make Americans feel less guilty about the destruction and suffering this war has caused, but it will not be sufficient to make a difference in saving the lives of the vast majority of innocent civilians whose lives are still at risk.”

Accompanying these efforts was a strong recourse to the vocabulary of strategic interest and regional security. Whereas Bush administration officials cited Iraqi refugees’ potential militancy as a reason to exclude them from U.S. resettlement programs, Democratic refugee advocates turned this security logic on its head. A bipartisan Iraq Study Group chaired by James Baker and Lee Hamilton warned that “Iraq and the region could be further destabilized” by the diffusion of Iraq’s civil conflict among refugee populations in neighboring states. The Refugee Crisis in Iraq Act, introduced by the late Senator Edward Kennedy in June 2007, added: “If [refugees’] needs are not quickly and adequately met, these populations could become a fertile recruiting ground for terrorists.” By framing the Iraqi refugee crisis as a source of insecurity at a time when Iraq’s civil war appeared to be waning, refugee advocates found a strategic justification for Iraqi resettlement that resonated with the crisis-control tactics being deployed on the ground in Iraq.

Playing into the securitized rhetoric of refugee policy is, of course, a tricky proposition. Refugee advocates risk validating the belief that refugees are inherently dangerous populations, and, more broadly, they risk endorsing the type of hawkish U.S. policies that precipitated the crisis in the first place, including future invasions in the Middle East and beyond.

But it is effective. Thanks to Kennedy’s bill, Iraqi resettlement increased nearly tenfold between 2007 and 2008. The United States also established Overseas Processing Entities in Egypt, Jordan, Iraq, and elsewhere to expedite applications from U.S.-affiliated Iraqis and families of special humanitarian concern. In short, a combination of public outcry over U.S. culpability for Iraqi suffering and a strategic appeal to security concerns resulted in some 100,000 Iraqis afforded the opportunity for resettlement and citizenship.

How might these experiences apply to the Syrian refugee crisis?

First, public opinion has a greater influence on refugee resettlement than we might think. More than 87,000 Americans have signed a whitehouse.gov petition to resettle at least 65,000 Syrians by 2016. Activists across the United States and Europe have organized rallies on behalf of refugee resettlement and open borders under the slogan “refugees welcome.” The Obama administration’s recent announcement of 10,000 Syrians to be resettled is undoubtedly a response to public demand.

And what of the “security” rhetoric that haunts U.S. resettlement programs? Between the Assad regime’s brutality, the advance of the Islamic State (or ISIS), state failure in Iraq, conflict in eastern Turkey, and ongoing political crisis in Lebanon, the security situation in the Levant could hardly be more dire.

[R]efugees are the victims of conflict, not its cause.

We can dispense with the notion that Arab refugees themselves are vectors for violence; refugees are the victims of conflict, not its cause. Yet the arrival of so many migrants within a short window of time places immense pressure on the capacities of regional governments already struggling to provide basic goods to their populations. Refugee strain is nothing new—before Iraqis and Syrians, the states of the Levant each hosted hundreds of thousands of Palestinian refugees—nor is it limited to the Middle East. A vast majority of refugees worldwide—many of them victims of conflicts begat by the United States and other first-world nations—reside in neighboring states of first asylum, placing a disproportionate burden of refugee-hosting on poor, weak, and conflict-prone governments.

An appeal to security interests based not on vague fears of refugee terrorism, but rather on concern for the well-being of citizens in refugee-hosting states and the stability of their governments, may prove an effective frame for refugee advocates moving forward.

Finally, refugee resettlement doesn’t end with a visa issued. Newly arrived refugees need food and clothing, help navigating bureaucracies, long-term psychological support, language instruction, and job training. Support for resettled refugees is handled by an array of public and private agencies known as VOLAGs—some are better equipped than others, and many rely on volunteer services and donations.

A series of haunting articles in 2009 revealed the extent of homelessness among resettled Iraqis, for whom the existing infrastructure of refugee services has proven inadequate. Families escaping murderous regimes, the brutal stagnation of camps, and the perils of crossing the Mediterranean deserve better. As the promised 10,000 Syrian refugees begin to arrive on U.S. shores, advocates must pressure the U.S. government not only to open borders, but to expand social services as well.