Africa is the world’s last frontier in the fight against extreme poverty. Today, one in three Africans—422 million people—live below the global poverty line. They represent more than 70 percent of the world’s poorest people.

However, there is light at the end of the tunnel. According to projections from the World Data Lab, Africa has now reached a milestone in the fight against poverty. As of March 2019—and for the first time since the start of the SDGs—more Africans are now escaping extreme poverty than are falling (or being born) below the poverty line (Figure 1). The pace of this net poverty reduction is currently very small: only 367 people per day. Nevertheless, by the end of this year, this rate will increase to over 3,000 people per day, resulting in a 1 million-person reduction in total African poverty in 2020.

If these broad trends continue, by 2030, Africa will reduce the ranks of its extremely poor by 45 million and relative poverty will decline from 33.5 percent today to 24 percent. However, this still means that the continent will fall short of achieving Sustainable Development Goal (SDG) 1, eradicating extreme poverty by 2030. Approximately 377 million Africans will still be living on less than $1.90 a day and very few African countries will have ended poverty.

The most significant challenges for reducing poverty in Africa are found in just two countries: Nigeria and the Democratic Republic of the Congo (DRC). Taken together, the 150 million citizens of these two countries represent more than one-quarter of total poverty in Africa today—and are expected to represent almost half of Africa’s poor by 2030. Even though Nigeria is expected to lift nearly 10 million of its citizens up to the middle class (or beyond) over the next decade—relative poverty shares will decrease by almost 3 percent—the absolute number of poor people in Nigeria will still increase by some 20 million due to rapid population growth. In the DRC, relative poverty is projected to drop by as much as 15 percent but the absolute number will increase by almost 2 million, meaning over half the population will still be living in extreme poverty by 2030.

By 2030, Africa will represent approximately 87 percent of the global poor—the main hotspots outside Africa will be Haiti, Papua New Guinea, Venezuela, Afghanistan, and North Korea.

However, many countries are making progress towards ending poverty, including in sub-Saharan Africa. Today, four countries already have poverty rates of below 3 percent: Equatorial Guinea, Gabon, Mauritius, and Seychelles. Currently, Mauritania and Gambia are projected to join this group by 2030. There are six additional countries whose poverty rates are expected to reach below 5 percent. With a slight acceleration of growth, these economies could also make extreme poverty history by 2030: 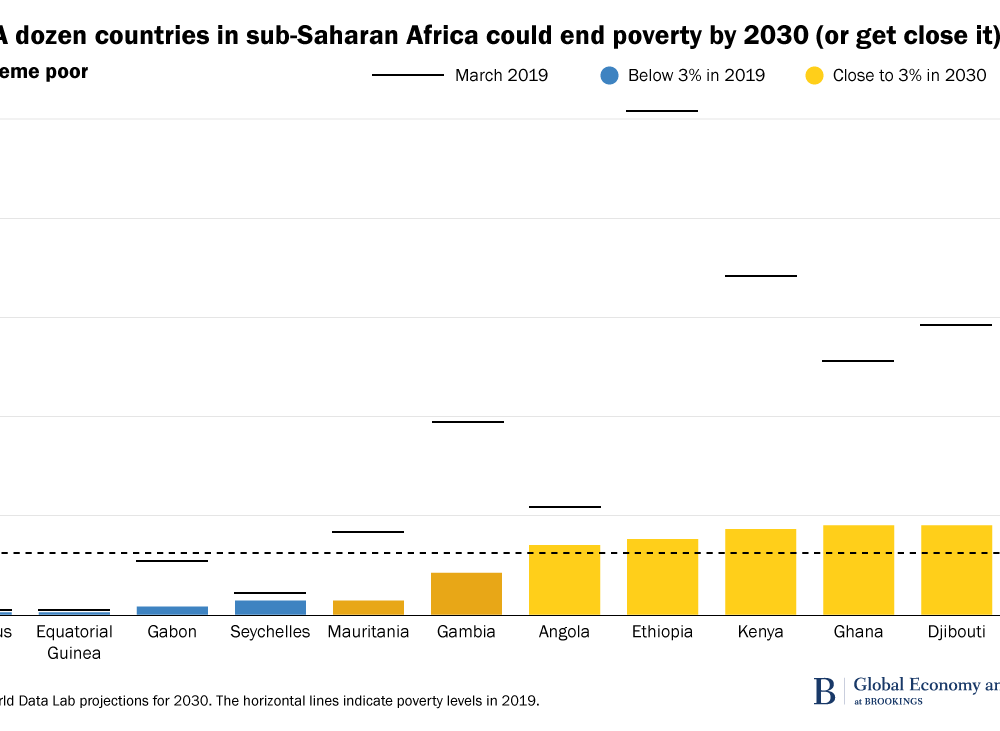 If current trends stay as they are, Ethiopia and Kenya are projected to achieve SDG 1 by 2032; Ghana, Angola, and Côte d’Ivoire in 2033; while Djibouti will follow a year later in 2034.

As the global poverty narrative shifts towards Africa, including at this year’s U.N. General Assembly, it seems clear that ending extreme poverty by 2030 seems almost impossible at this point. However, it is important to note that the continent has turned the corner and poverty levels could come down substantially over the next decade.

A global tipping point: Half the world is now middle class or wealthier

The start of a new poverty narrative