Nature has given every species an intrinsic life span. Life span is a bit like an upper bound to life expectancy: If you got every member of a species healthier and healthier, life expectancy of that species would constantly increase, but eventually be bound by life span. And every species has a different life span: For flies, it’s just a couple of days; for bowhead whales it’s 200 years. For humans, biologists have found that up until the 1960s, life span was around 89 years. This means that if we kept improving our health systems, the world population’s life expectancy would converge to our species’ life span of 89.

In public health, this development is called “compression of morbidity.” The idea is that as our health systems improve and we live healthier and healthier. The time we spend in illness and infirmity, especially in the last years of our life, becomes shorter. Our population’s survival rate becomes more and more “rectangular,” having more people survive until old age and allowing for healthier life at old age (see Figure 1). However, life span acts as a fixed point beyond which no further gains in health are possible and survival rates of humans drop quickly to zero, owing to the “compensation effect of mortality.”

In practice, however, we do not observe a conversion of life expectancy to life span across countries and world regions. The reason seems to be that sometime in the 1970s, human life span itself began to increase—a feat no other species has managed before us. Prior to the 1970s, biologists, using historic data on human survival rates, have found indeed that human life span was constant at about 89 years. Yet, since the 1970s, life span has increased markedly, pushing the limit of life expectancy.

Figure 1 illustrates this for Canadian males. It depicts the probability of surviving to a given age for different years, from 1925 to 2075. One can clearly observe the “rectangularization of survival rates,” with significantly more people surviving until high age in 2010 than in 1925. However, when comparing survival rates at age 90, one cannot observe any significant improvement between 1925 and 1975; survival was more or less constant at a level well below 10 percent. However, since then, the survival rate at age 90 jumped markedly to about 20 percent in 2010. Hence, although survival rates improved spectacularly for younger ages between 1925 and 1975, improvement in health systems did not make much of an impact on the very old during that time; increases in life-expectancy were bounded. Since 1975, however, this seems to be untrue; the limits to increases in life expectancy were relaxed. And it’s believed that these limits will relax even more over the next 60 years.

Figure 1:  Different survival probabilities of male Canadians, from 1925 to 2075 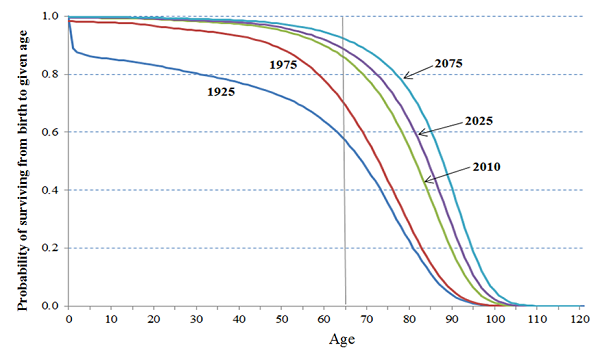 How did we break the limits of life expectancy? We don’t know exactly, but the prime candidates are the invention of regenerative medicine and organ replacements. The biggest medical breakthroughs up to the 1960s were arguably the discovery of antibiotics, vaccines against diseases ranging from rabies to polio, and significant progress related to hygiene. These interventions helped to slow down the bodily decay of our vital organs—literally the “heart” of our physical health. However, overcoming the failure of human organs—like heart bypass or dialysis—or replacing them altogether had a profoundly different impact on the speed of bodily decay. These new medical procedures, in particular organ transplants, meant extending the functions of our body beyond what nature had foreseen and therefore affected the life span of the human species and removing the natural limits to life expectancy. In fact, now biologists believe that our life span has increased to 97 years, a gain of eight years in the course of 40 years.

What does all this mean for aging societies? The policy implications of bounded life expectancy are indeed quite different from unbounded life expectancy. In a world of bounded life expectancy, we would continue compressing morbidity, living healthier and healthier lives, but facing rapid aging in the last years of our life. Our life cycle decisions, like how much education to get and when to retire, would in fact become much more plannable, knowing that the likelihood of living up to 89 is rather high, but living beyond it is rather improbable. One could even argue that as we get healthier in the future. We would also get more productive, earning more income during work life; but knowing that we are likely to die at an age of around 89 (give or take), we could actually work less long and retire earlier.

Not so in the case of boundless life expectancy: We’d never be sure what new medical inventions, especially in the field of genetics, could extend our lives beyond our wildest imagination—maybe even to the age of 150, and possibly within our lifetime. In such a world, the question on what money to live off during old age becomes a very different one: Living to 150, but retiring at age 65 or even earlier will not be an option. Longer work lives and lifelong investments in education, training, and skills become a must that will ultimately lead to higher lifetime income, wealth, and savings for old age. Surely, public pensions can, should, and will also play an important role in securing old-age income. However, during times of rapid expansion of life-expectancy, pay-as-you-go systems will come under strain, exerting a heavy toll on younger generations—and older generations risking to overstay their welcome. If, though, societies get the balance between work and retirement right, nothing is in the way of an era of golden aging, even during times of shifting limits of life expectancy.

To lift the American economy, we need to understand the workers at the bottom of it