The narratives on U.S. development aid to Pakistan—as well as Pakistan’s own development policy discussion—frequently invoke the conventional wisdom that more education and better economic opportunities result in lower extremism. In the debate surrounding the Kerry-Lugar-Berman bill in 2009, for instance, the late Ambassador Richard Holbrooke urged Congress to “target the economic and social roots of extremism in western Pakistan with more economic aid.”

But evidence across various contexts, including in Pakistan, has not supported this notion (see Alan Kreuger’s What Makes a Terrorist for a good overview of this evidence). We know that many terrorists are educated. And lack of education and economic opportunities do not appear to drive support for terrorism and terrorist groups. I have argued that we need to focus on the quality and content of the educational curricula—in Pakistan’s case, they are rife with biases and intolerance, and designed to foster an exclusionary identity—to understand the relationship between education and attitudes toward extremism.

My latest analysis with data from the March 2013 Pew Global Attitudes poll conducted in Pakistan sheds new light on the relationship between years of education and Pakistanis’ views of the Taliban, and lends supports to the conventional wisdom. The survey sampled 1,201 respondents throughout Pakistan, except the most insecure areas of Khyber Pakhtunkhwa and Baluchistan. This was a time of mounting terror attacks by the Pakistani Taliban (a few months after their attack on Malala), and came at the tail end of the Pakistan People’s Party’s term in power, before the May 2013 general elections.

On attitudes toward the Pakistani Taliban, or Tehrik-e-Taliban Pakistan (TTP), 3 percent of respondents to the Pew poll said they had a very favorable view, 13 percent reported somewhat favorable views, while nearly 17 percent and 39 percent answered that they had somewhat unfavorable and very unfavorable views, respectively. A large percentage of respondents (28 percent) chose not to answer the question or said they did not know their views. This is typical with a sensitive survey question such as this one, in a context as insecure as Pakistan.

So overall levels of support for the TTP are low, and the majority of respondents report having unfavorable views. The non-responses could reflect those who have unfavorable views but choose not to respond because of fear, or those who may simply not have an opinion on the Pakistani Taliban.

Figure 1. Pakistani views on the Pakistani Taliban, by education level, 2013 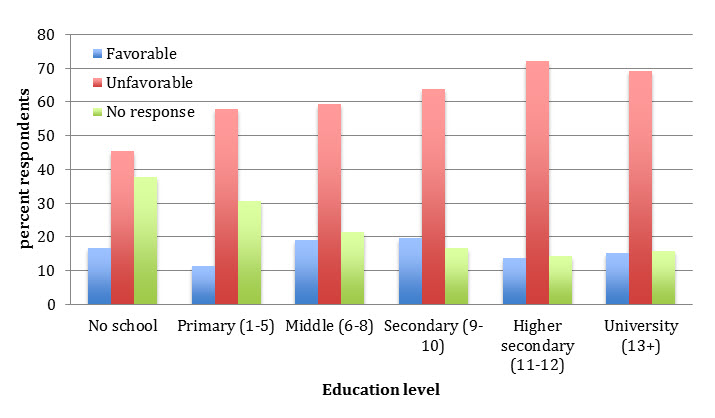 Figure 2. Pakistani views on the Pakistani Taliban, by income level, 2013 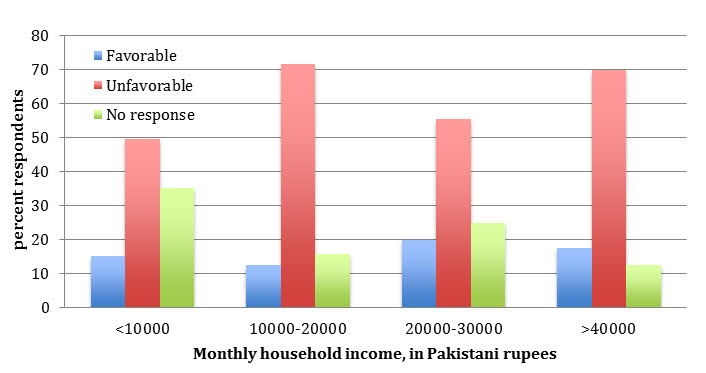 Figure 2 shows views on the Pakistani Taliban by income level. While the percentage of non-responses is highest for the lowest income category, the percentages responding favorably and unfavorably do not change monotonically with income. We see broadly similar distributions of attitudes across the four income levels.

But these cross-tabulations do not account for other factors that may affect attitudes: age, gender, and geographical location. Regressions (not shown here) accounting for these factors in addition to income and education show interesting results: relative to no education, higher education levels are associated with less favorable opinions of the Pakistani Taliban; these results are strongest for those with some university education, which is heartening. This confirms findings from focus groups I conducted with university students in Pakistan in May 2015. Students at public universities engaged in wide ranging political and social debates with each other on Pakistan and its identity, quoted Rousseau and Chomsky, and had more nuanced views on terrorism and the rest of the world relative to high school students I interviewed. This must at least partly be a result of the superior curriculum and variety of materials to which they are exposed at the college level.

My regressions also show that older people have more unfavorable opinions toward the Taliban, relative to younger people; this is concerning and is consistent with the trend toward rising extremist views in Pakistan’s younger population. The problems in Pakistan’s curriculum that began in the 1980s are likely to be at least partly responsible for this trend. Urban respondents seem to have more favorable opinions toward the Taliban than rural respondents; respondents from Punjab and Baluchistan have more favorable opinions toward the Taliban relative to those from Khyber Pakhtunkhwa, which as a province has had a closer and more direct experience with terror. The regression shows no relationship of income with attitudes, as was suggested by Figure 2.

Overall, the Pew 2013 data show evidence of a positive relationship between more education and lack of support for the Taliban, suggesting that the persisting but increasingly discredited conventional wisdom on these issues may hold some truth after all. These results should be complemented with additional years of data. That is what I will work on next.

A global effort to counter extremism through education

Education and Boko Haram in Nigeria