One of the most striking—and controversial—findings from the new economics of well-being (more colloquially put, happiness) is that income does not always have the expected relationship with well-being. On average, individuals with more income are happier than those with insufficient income within countries, and wealthier countries are happier than poor ones. Yet periods of rapid change—including positive change such as rapid economic growth—are often associated with drops in happiness. In earlier cross-country research, Eduardo Lora and I identified this trend as the “paradox of unhappy growth.”

No country better demonstrates this paradox than China. Its past two decades were characterized by unprecedented rates of economic growth and poverty reduction. Indeed, much of the reduction in the world’s extreme poverty rate during that time can be explained by the millions of Chinese who exited poverty. GDP per capita and household consumption increased fourfold between the years 1990 and 2005, and life expectancy climbed to 75.3 years from 67 years in 1980. Yet during the same period, life satisfaction levels plummeted. Levels dropped precipitously in the initial stages of rapid growth, beginning in 1995, and slowly began to recover beginning in 2005. This trend was first identified by Richard Easterlin (the first modern economist to work on happiness). He estimates that life satisfaction fell by 5 percent in the same years that the average rate of growth was 8 percent. 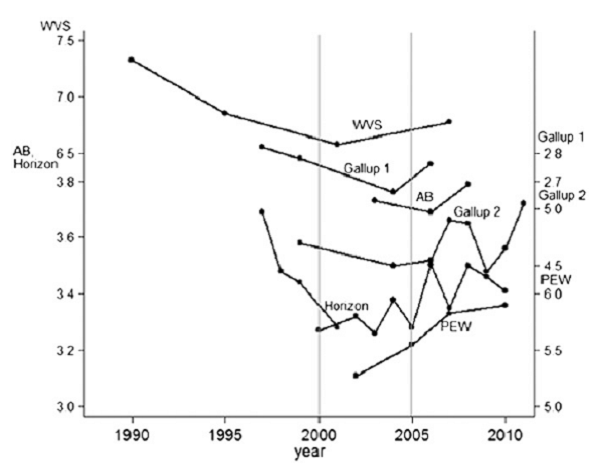 
Of course one problem is that we do not have good or comparable statistics for either life satisfaction or mental health for the pre-transition period, a problem common to many transition economies and which also applies to other statistics as well. The World Values survey (WVS in Figure 1) only began collecting life satisfaction data for China in 1990 and again in 1995, and Gallup in 1995.

During the same period, there also were significant increases in suicide and mental illness. China had one of the highest suicide rates in the world in the 1990s: 23.2 suicides per 100,000 people per year from 1995 to 1999, a rate which gradually fell to 7.8 per 100,000 by 2012. Mental health reports, on the other hand, increased as suicide rates fell (perhaps because more individuals sought treatment): inpatient admissions to mental hospitals increased 13.4 percent from 2007-2012; outpatient visits, 12.4 percent. Mental health services have historically had low priority in China, and the issue has only recently surfaced in the public domain.

Despite our inability to compare these trends with those in the pre-transition period, there is no doubt that for the period of rapid growth, well-being metrics—including measures of mental health—tell a very different story from that of income metrics. What explains the discrepancy?

Changes in the pace and nature of economic growth tend to bring increases in insecurity (as rewards to different skill sets change) and in inequality, as there are winners and losers in the process. These trends were particularly stark in the case of China: its economic boom occurred as centrally planned macroeconomic management was replaced by free market principles and accompanying changes in social welfare structures—while traditional safety nets were dismantled as millions migrated from rural to urban areas in search of new opportunities. It is telling that inequality in life satisfaction increased at the same time it decreased on average.

In a recent Brookings paper, “Happiness and health in China: The paradox of progress,” written in collaboration with Shaojie Zhou and Junyi Zhang of Tsinghua University, I took advantage of a new nationally representative survey to explore the determinants of mental health and life satisfaction in China in greater depth. The two variables are, not surprisingly, inversely correlated with each other, but with some important differences.

The usual correlates of life satisfaction—such as age, income, gender, and health—are consistent in China. Yet there are also some differences that reflect the very rapid nature of China’s transition and growth, and associated “progress paradoxes.” More educated respondents, those in urban areas, and those with insufficient rest and leisure, for example, are much less satisfied with their lives than the average. In contrast, respondents in rural areas, workers in more stable jobs in the public sector, and respondents with less education are more satisfied than the average. Respondents without “hukou” (legal residential) status had significantly lower levels of life satisfaction as well. The lack of security that is associated with China’s rapid progress is an important factor in life satisfaction, as are a number of quality of life issues associated with long working hours and high workforce stress.

The patterns in mental health reports also reflect the same progress paradoxes. Urban and more educated respondents, as well as those with insufficient time for leisure or sleep, were more likely to report depression and anxiety than were those living in rural areas and the less educated. Physical health directly and significantly affects mental health, with people reporting minor ailments having more severe mental health problems in both rural and urban areas (the causality could run in both directions, of course). In contrast, physical health is much less important to life satisfaction.

Finally, a novel finding in our paper is that reports of mental health problems are the highest at the same age range that life satisfaction is the lowest (at the middle-aged years), and then decrease as life satisfaction increases. The standard U curve in age and happiness becomes an inverse U in age and depression/anxiety. The U curve is often explained by the double burdens (family and financial) of the middle age years. They are likely compounded in China by long hours and insecure labor arrangements on the one hand, and the additional burden that aging parents place on only children in their middle-aged years on the other.

China’s rapid economic progress has not been free of cost. Given the many years of very high rates of growth, it may be time for a new public focus on (1) increasing the supply and quality of mental health care, and (2) improving working conditions, job security, and other quality of life related areas. Happier people are, on average, healthier and more productive, and mental illness tends to have debilitating effects on performance in the workplace. A new public focus on these issues in China would help people live better, happier, and more productive lives, leading to more sustainable growth and development in the long run.