Poland was the only economy in the European Union to avoid recession during the 2008 global financial crisis. Even in 2009, when the whole EU went into recession, Poland continued to grow at 2.6 percent. Today, Poland’s economy is a quarter larger than at the onset of the crisis, while the economy of the EU as a whole grew by only 0.7 percent (Figure 1). 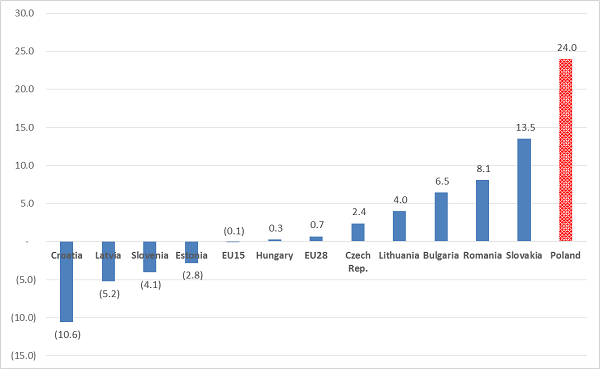 Source: author’s calculations based on Eurostat.

This remarkable performance resulted from a number of factors, including timely fiscal and monetary stimulus, a large depreciation of the currency, and a relatively large domestic economy, which limited the country’s exposure to falling international trade. In addition, growth was supported by growing inflows of funds from the European Union, a diversified export structure, and sustained confidence among Polish consumers and entrepreneurs.

Poland’s impressive performance has also been driven by a healthy banking sector. Polish banks remained profitable, liquid, and well-capitalized throughout the crisis. They did not need a single dollar of public support. In contrast to most other EU countries, Poland’s banks managed to increase lending to the private sector during the crisis, supporting the country’s growth.

An overlooked factor has been the counter-cyclical role of PKO BP—a commercial public bank and the largest player in the Polish market with almost a 20 percent market share—in helping to deal with the crisis.

While foreign-owned banks, which controlled almost 75 percent of the banking sector’s assets, were cutting lending in panic, PKO BP was expanding lending at the same time. Its loan portfolio increased by 1.2 percent of GDP in 2009 and represented 40 percent of total new bank lending in that year. The bank’s lending increased for all market segments, including the crucial small and medium-sized enterprise sector. 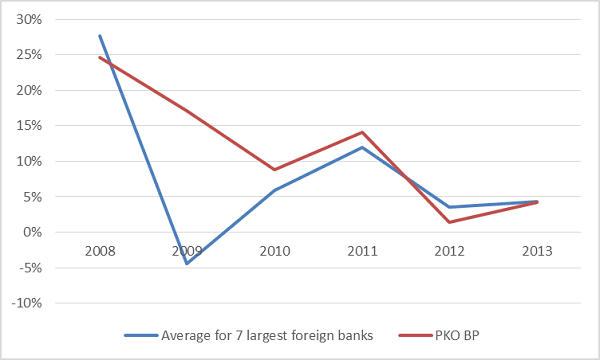 PKO BP’s positive contribution to Poland’s market liquidity during the global financial crisis contrasts with the often poor performance of other state-owned commercial and development banks around the world, which often suffer from weak corporate governance, misaligned incentives, and unclear mandates. The consensus is that while lending by state-owned banks can sometimes play a useful counter-cyclical role, “the track record of state banks in credit allocation remains generally unimpressive,” despite a few success stories.

What can explain the different behavior of PKO BP and Poland’s foreign-owned banks? Four things:

PKO BP’s increased lending during the crisis did not undermine the loan quality. The bank’s non-performing loans (NPLs) have increased less than the market average during 2008-2011. In 2011, NPLs amounted to less than 8 percent of the bank’s total assets, below the market average of almost 9 percent. At the end of 2014, the bank’s NPLs amounted to 7.7 percent.

The case of Poland’s PKO BP suggests that state-controlled banks can indeed play an important counter-cyclical role during crises by supporting lending to the economy. It also highlights the benefits of a diversified bank ownership structure. Foreign banks are likely to play a positive role in supporting financial deepening and mitigating endogenous crises, but domestically owned banks may come in handy when the sector is hit by exogenous crises.

For state-controlled banks to be successful, however, they need to be professionally managed, commercially oriented, open to free-market competition, and subject to hard budget constraints. Taking state-controlled banks public can help meet some of these conditions. PKO BP’s stock market listing promoted adoption of international accounting standards, reduced political pressures and imposed market discipline. But market discipline alone is not likely to be sufficient; state-controlled banks are likely to perform well in countries with a well embedded culture of transparency, accountability, and responsibility. Achieving these, however, is far from straightforward.

This blog post reflects the personal views of the author and does not represent the position of the World Bank Group.

How artificial intelligence is transforming the United States and the world