It’s been quite a while since I was so excited to discover a single data point. In glancing through the World Development Indicators database last week, I realized that Cote d’Ivoire’s reported cereal yields surpassed 3 tons per hectare (t/ha) in 2013. This marks the first time a mainland sub-Saharan African country (excluding temperate zone South Africa) has ever crossed the 3 t/ha threshold. It might be a big deal.

Why does 3 tons matter? Agronomists often describe the jump from roughly 1 t/ha to 2 or 3 t/ha as an agricultural “green revolution,” the first stage leap in a country’s agricultural productivity. Nearly a decade ago, during a late night of staring at data sets, I realized that Korea’s cereal yields were listed as already greater than 3 t/ha in 1961, the first year of the World Development Indicators data. As of the mid-2000s, African cereal yields had been hovering at pre-green revolution levels of around 1 t/ha for a few decades, a dynamic that is fundamental to understanding the region’s long-term economic challenges.  It then struck me that Korea’s initial 3.2 t/ha number in 1961, linked to its high input intensity, was higher than any mainland tropical African country’s yields had ever been. This also presented yet another data point refuting the common premise that Ghana and Korea had the same starting level of economic development as of 1960. The two countries’ enormous differences in rural productivity (and input intensity) per hectare suggested they were not at the same starting level at all.

This “Korea 1961” versus “all-time Africa” yield comparison stuck in my head. I have written about it and mentioned it in countless conversations over the years (…my poor friends and colleagues). Figure 1 illustrates the point by comparing Korea’s 1961 yields to the mainland tropical African country with the highest yield in each of 1961, 1981, 2001, and 2013. Right up to the beginning of the 2000s, Korea’s 1961 yields were more than a ton higher per hectare than the leading African yield. Then in 2013, Cote d’Ivoire falls just short of 1961 Korea, at 3.1 t/ha compared to 3.2 t/ha. 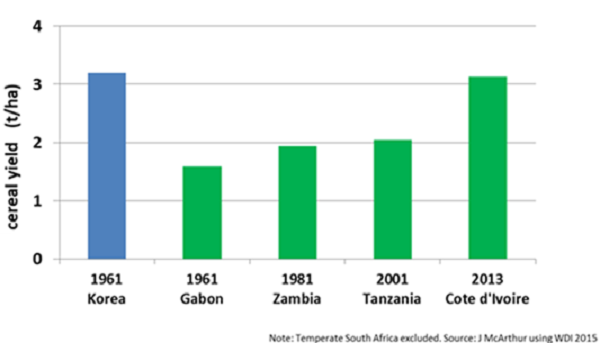 How is Africa doing overall? A renaissance of global policy attention in the mid-2000s resulted in a major effort to launch an “African Green Revolution,” as initially called for in an important speech by U.N. Secretary-General Kofi Annan in July 2004. This helped to accelerate progress in many countries in subsequent years. Some of the gains have been significant, including Ethiopia, Malawi and Rwanda each jumping from around 1 t/ha in the early 2000s to more than 2 t/ha in the past couple of years.  Zambia has been regularly above 2.5 t/ha since 2010. Nonetheless,  average African yields remained only 1.4 t/ha as of 2013. So Cote d’Ivoire’s recent 3 t/ha still represents more than double the regional average.

A few other reference points: The green revolution story is also important to understanding Asia’s modern economic history. Most of Asia’s modern industrial success stories were preceded by major boosts in cereal yields. For example, China first crossed the 3 t/ha threshold in 1979, as did Indonesia in 1981 and Vietnam in 1989. The term “green revolution” was itself originally coined to describe the phenomena whereby India and Pakistan both saw their yields steadily climb from less than 1 t/ha in the mid-1960s to more than 2 t/ha in the late 1990s. India itself crossed 3 t/ha for the first time in 2012.

Some essential caveats:  First, Cote d’Ivoire has an unusually small amount of agricultural land harvested to cereals. More than 40 percent of the area is harvested to cash crops, especially cocoa. Second, it has only crossed the 3 t/ha threshold in one year, so this could be a one-off success. In 2012 the yields were 2.8 t/ha, significantly higher than 2.3 t/ha in 2010, the year preceding a major political crisis. Third, yield data are notoriously imperfect and there could well be measurement problems underpinning the observation. Fourth, yields offer only a partial measure of productivity, and are driven by many factors. They do not capture deeper issues of output per worker or total factor productivity. No one should pretend that yields tell a full story of agriculture.

A bottom line reason to hope: Africa’s agricultural systems are extraordinarily diverse, so one country’s partial productivity measure cannot be overstated as capturing trends across a vast continent’s diverse range of crop systems. Nonetheless, the recent Cote d’Ivoire yield observation is unprecedented, and thereby provides cautious grounds for broader hope. At least some African countries might well be entering a “greenshoot revolution” in agriculture.

At a minimum, I hope that in the next year or two, either Cote d’Ivoire or some other African country will see its average cereal yields surpass 3.2 t/ha.  Thereafter, any assertion “Korea’s 1961 cereal yields were higher than any African’s country’s has ever been,” can finally be put to bed.  What a relief!