At the World Bank, we have seen many colleagues who retired on a Friday only to come back as consultants the following Monday. They don’t do it for the money, but rather because they enjoy working. There is now ample evidence that seniors who remain active beyond the official retirement age are on average happier and healthier than those who don’t. But how common is the phenomenon of post-retirement work (beyond anecdotal evidence from the World Bank)? Is there evidence that most workers in developed countries would actually elect to work longer if they could? And if so, do retirement systems allow for such choices?

Over the last 125 years, ever since Germany under Chancellor Bismarck introduced the institution of “old age insurance,” the nature of retirement and its financing have changed substantially. Bismarck’s original idea was essentially a disability insurance meant to protect those who had become too old to work and earn an income. The pension eligibility age was set at 70 years, but the benefit was paid only if the person retained no more than one-third of normal working capacity. Moreover, at the time, very few even lived long enough to become eligible, which also meant that the pension system was well funded. Bismarck’s system was effectively an insurance, not an entitlement.

Today, retirees live longer and retire earlier. For example, in Austria, Ireland, and Spain, since 1965, the effective retirement age declined by almost a decade, while life expectancy increased by 10 years over the same period. Economic and demographic growth meant that people could retire earlier, live longer, and enjoy old-age in prosperity rather than poverty.

Germany is also an interesting case because its population is aging and shrinking, which makes it a case in point to study retirement policies. Germany was one of the few countries that resisted an expansion of retirement years and even increased the effective retirement age for men by two years since 1965. However, recently, the government made a policy U-turn introducing partial retirement at the age of 63 (after 45 years of contributing to the pension system).

Does this make sense given the big shifts in how societies and economies operate, the changing nature of work, and dramatic improvements in the longevity and quality of “senior life”?

First, the world is undergoing a momentous demographic shift. In 2000, the world had less than half a billion people at the age 65 or above; by 2050 the number will have more than tripled to 1.5 billion or 15 percent of the world’s population. In Germany seniors overtook juniors as a share of the population at the turn of the century and the number of retirees (65+) will increase further from 17 million today to 24 million in 20 years, while the potential workforce (age 16-64) is declining rapidly (see Figure 1). 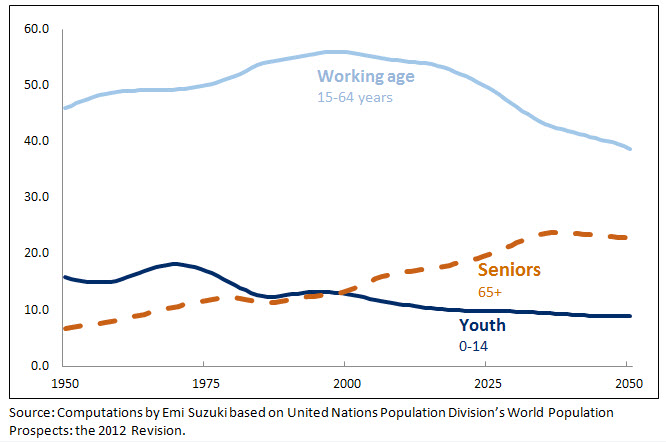 These trends are shaped by longer life expectancies and lower fertility. A child born today in Europe, especially if it is a girl, has a good chance to live 100 years. If you take the principle of 45 workings years, this person would be able to benefit from public contributions—first as a child, later as a retiree—for more than half of his or her life. This is not sustainable.

Second, the nature of work has also changed: from predominantly “blue collar” jobs (many of which are getting automated) to increasingly “white collar” occupations, which are less taxing physically. What has also changed, then, is the fundamental hypothesis upon which pension debates were premised, that work is an unpleasant necessity and only the prelude to happier times. In that old “assembly line” narrative, the span of one’s work-life is calibrated to years of peak physical strength and workers perceived as interchangeable. To some extent it remains relevant for workers still engaged in physically straining or routine activities (in manufacturing or service jobs) and those should have the opportunity to retire at an age that allows them to enjoy retirement. But a large and growing share of the workforce no longer fits in that box: they find self-fulfillment in their jobs and should have the opportunity to work beyond pre-set retirement ages, including through flexible working arrangements.

Third, the assumed correlation between age and productivity is weaker in the new economy. Skills—and hence productivity—are not necessarily declining with age, but rather shifting. In fact many skills improve with age, mostly those related to oral and written comprehension and expression and soft skills like emotional stability, conscientiousness, and agreeableness. We call these “age-appreciating” skills. Not surprisingly, there are some occupations that use these skills more intensively than others and in which older people might actually do better than younger folks, including sales representatives, HR managers, or editors. Recent neuro-scientific research shows that well-performing seniors activate both brain hemispheres when solving tasks whereas young people rely only on the brain hemisphere that processes new information. Older people also use the second hemisphere to extrapolate, based on experience; in other words, they compensate for a decline in one ability by activating a new strength.

All of this points to the fact that we not only live longer and healthier lives, but we also have the potential to work longer. The changing nature of the labor market also provides an opportunity for seniors to stay engaged, and for many more women to join the labor market resulting in a double demographic dividend. A binary system of working 100 percent until retirement and then suddenly moving to zero percent at an arbitrary age of around 65 is one of the great anachronisms of today’s labor market in many OECD countries.

Part of this blog builds on a forthcoming World Bank book “Golden Aging. Prospects for Healthy, Active, and Prosperous Aging in Europe and Central Asia” by Maurizio Bussolo, Johannes Koettl, and Emily Sinnott.

To lift the American economy, we need to understand the workers at the bottom of it