Turkey is a winner of globalization and economic integration. Opening up to trade and capital flows provided both the engine and the lubricant for Turkey’s economic modernization. In particular, the customs union with the EU, followed by the opening of EU accession negotiations, ensured that Turkey became part of the “European convergence machine.” Just as it has been the driver of progress in the past, economic integration is also central to Turkey’s future prospects. This was the topic of a session at Brookings on Turkey’s trans-Atlantic integration and its prospects to escape the “middle-income trap.” In a previous blog I wrote about that middle-income trap, now let me address the former topic.

Since the early 1980s, Turkey’s share of global exports and imports has increased fourfold and the share of trade to GDP has risen from barely 10 percent to over 50 percent today (see Figure 1). Turkey’s increasing global economic heft is comparable to developments in other large emerging market economies such as Brazil, India, and Russia, although it does not quite match the performance of China or Eastern Europe.

Figure 1: Turkey’s share of global trade has increased fourfold since 1980 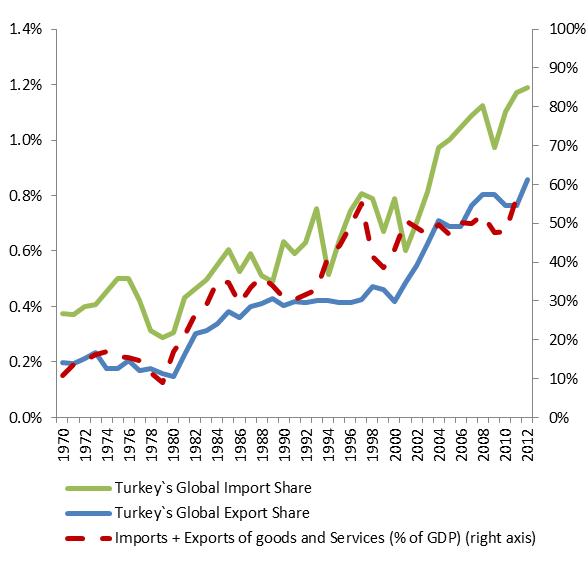 Yet in the last three years, Turkey’s economic engine has started to sputter. Some believe that the reason is over-reliance on a weak EU economy, and that group thus favors a diversification by Turkey to other markets. Indeed, as EU markets have slumped, Turkey’s trade with the Middle East has increased and Turkey is successfully expanding to markets in Africa and Latin America. However, it would be wrong to deduce from this that further integration with the EU is unnecessary. Our analysis shows that it is precisely the firms that have successfully established themselves in the EU market that are best at diversifying to third markets. The same firms also have higher productivity growth and pay higher wages than firms without exports to the EU. The European market may not be the most dynamic in the world, but it is still a standard setter for quality that cannot be ignored.

Figure 2: The chances of an exporter surviving increase with higher quality and greater import dependence 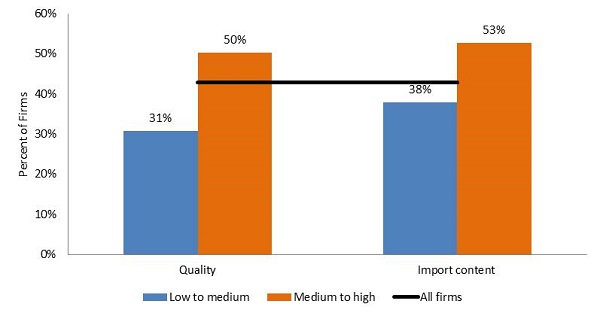 Source: World Bank calculations based on Turkstat industrial census. Note: The chart shows the probability of a firm surviving after 5 years in an export market. The blue bars show, respectively, firms with product quality and import content below the sample average. The orange bars show firms with above average product quality and import content.

Others argue that Turkey needs to reduce its reliance on imports to close a chronic trade deficit. Once again, this may be reversing cause and effect. Exporting firms with higher import content in production and firms producing higher quality goods are more likely to survive in export markets (see Figure 2). Turkey needs more integration, not less, to upgrade quality and move up the value chain.