We would like to welcome readers to the new home for this blog at the Brookings Institution. We hope you continue to find Future Development is an interesting platform for commentary on the highlights of what is happening in development economics and in the development policy world.

To kick things off, we tried to step back and look at the big trends affecting poverty, as we see them at the start of 2015.

Beyond forecasts, 2015 is an important year for development and development cooperation. It is the target year for the MDGs. The track record is broadly positive; in particular, the headline target for extreme poverty reduction was achieved five years ahead of its target. Major gains in school enrollment and under-5 mortality have been achieved (albeit at slightly less than target rates). However, some indicators are lagging, especially improvements in water and sanitation, and progress on MDG 8, the global partnership for development, has also been disappointing.

There is an opportunity that in 2015, there will be new momentum in shaping global partnerships. The EU designated 2015 as its first-ever European Year for Development and many major events have the prospect of shaping the development agenda for years to come. The World Education Forum will take place in South Korea in May. The financing for development conference will be held in Addis Ababa in July. The sustainable development summit will take place in September to agree on goals for the next fifteen years. And a climate change agreement is hoped for at the December COP21 ministerial meeting in Paris.

Each of these events individually has the potential to move the development agenda forward in important ways. But we’ve had international conferences on development before. Why is 2015 different? Because we now have hard evidence that developing countries have been making the greatest progress ever observed. In this setting, the events of 2015 offer an opportunity to accelerate development and change business-as-usual forever.

In 2015, we are likely to see another 70 to 100 million people escaping extreme poverty. This is a continuation of the fastest pace of poverty reduction that the world has ever seen. It started with rapid poverty reduction in China and other East Asian countries, and has continued with development progress in South Asia and Vietnam. Now much of the African continent is joining in.

There are those who worry that African growth has not resulted in the kind of structural transformation that can yield strong, sustained, and broad-based growth. But at least in the short-run, Africans are finding jobs in services and construction, and for the first time in decades the pace of agricultural productivity growth in Africa is as high as that in other parts of the world. The jobs may not be permanent or formal, wage-paying jobs. However, they are helping to distribute the benefits throughout society, and with the ongoing demographic transition and urbanization there will be many more job opportunities in the future.

Of course, there are also set-backs. Ebola is the most visible and dangerous. But there has always been churning in poverty reduction. The SARS epidemic in 2002-2003 caused economic disruption in Southern China and other parts of East Asia but it did not interrupt the region’s journey to higher incomes and prosperity. The key is to act decisively to such outbreaks and to upgrade institutions, which will be the ultimate decider if countries move forward.

Pritchett and Summers (2014) also remind us that countries that grow fast in one decade tend not to do so well (or revert to the mean) in the next decade. Similarly, at the household level, some families face reversals while others move ahead. Roughly speaking, about one-third of those living in extreme poverty have had spells above the poverty line in the prior three years.

So in 2015, expect to see continued rapid reduction in the numbers of those living in extreme poverty, with all the attendant benefits this entails, from empowerment of citizens to access to health and education services. A less positive trend that is set to continue is inequality. But while many worry about rising inequality, it is worth remembering that inequality is happening largely because people are getting richer, not because they are getting poorer.

Figure 1: The developing world is getting richer 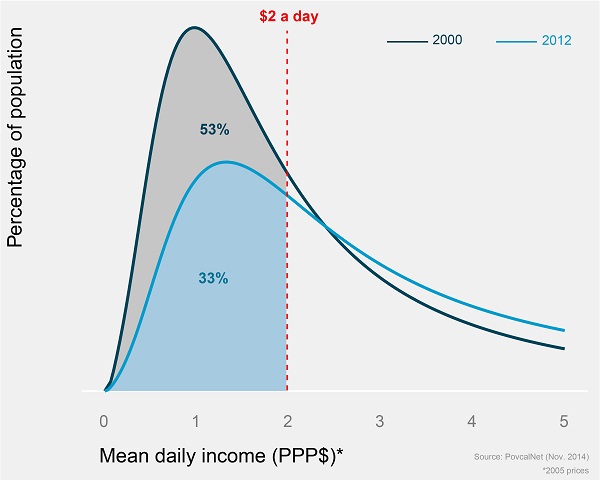 Figure 1 shows the distribution of incomes by household across the developing world for 2000 and 2012. There is a dramatic decline in the number of all those living below $2 per day (the shaded regions to the left of the $2 a day line) no matter what the starting income level was. In aggregate, the share of the developing world’s population living below $2 per day has fallen from 53 percent in 2000 to 33 percent in 2012, which means that those with more than $2 per day now represent two-thirds of the population worldwide. Households living on $10 per day or more—those in the middle class—have increased their share from 5 to 14 percent (not shown in Figure 1).

Professor of the Practice of Development - Georgetown University

A third trend that will continue to have a dramatic impact on development is the expansion of mobile technology and mobile payments. In 2014, we have already seen more mobile connections than there are people on the planet. This doesn’t mean that everyone is connected to everyone else. Some people (including the three of us) have several devices with mobile connections, while others may be connected without owning either a mobile device or a SIM card (i.e. by sharing). But it certainly points to the rapid spread of mobile technology—perhaps the fastest diffusion of a new technology in history.

In 2015, almost 300 million more people will own smartphones, bringing the total to above 2 billion, or 28 percent of the world’s population. Of course, most of these are in developed countries, but half of all smartphone users will be in the Asia Pacific region. With more smartphones and global connectivity, the preconditions for fast development will improve. Poor people will now not just be able to make or receive calls and transact payments. They will also be able to receive information more systematically—such as weather forecasts, price developments, quality of nearby health facilities and schools—and market their products more effectively.

So let’s remember that we are building on 25 years of experience with development cooperation expressed  in terms of global targets, with the market economy as the unchallenged route to development, and with a new technology that promises to connect everyone on the planet with each other and with global knowledge in a new and extraordinary way.

We look forward to hearing from you on these topics.