Today, the House returns to Capitol Hill for its first votes since the last week of May, presenting members with their second opportunity to vote by proxy on the floor. Members have had this ability since May 20, when Speaker of the House Nancy Pelosi (D-Calif) activated a rules change, adopted by the House earlier that month, allowing members to vote remotely. So far, six votes have been taken with some members voting by proxy. To gain a better understanding of the new proxy voting system, we analyzed the characteristics of members who have chosen to take advantage of the rule change.

Here are four general trends in the House’s proxy voting system so far. (Unless otherwise stated, numbers are based on active proxies as of June 24th at 4 pm.)

1. Only a subset of members—all Democrats—have named proxies.

Republican members are noticeably absent from the proxy voting list. Minority Leader Kevin McCarthy (R-Calif.), along with many members of his caucus, contends that proxy voting will diminish the House’s deliberative capacity and has encouraged his members to continue making the trip to Washington for legislative activity. Of the 233 Democrats in the House, only 65 have active proxy designations, roughly 28% of the caucus. Some members have already rescinded proxy designations they made last month, and not all of the legislators who have chosen proxies have actually exercised the remote voting option. On the Paycheck Protection Program Flexibility Act on May 28, for example, when 77 members had the option to do so, only 71 Democrats chose to cast votes by proxy.[1] The high number of members continuing to vote in person means that the House still satisfies a strict interpretation of the constitutional requirement that a simple majority of members be present to conduct business, which could affect a GOP legal challenge to the proxy voting rule.

2. Members tend to share important characteristics with their proxy designees.

Many of Congress’s important organizational features involve Democrats and Republicans, but various groups within and across the parties also affect how members interact in the institution. The selection of proxies reflects this. The Congressional Black Caucus and Congressional Hispanic Caucus, for example, are important avenues through which their members experience and have influence in Congress. Of the 28 members of these groups who have active proxies, roughly 46% have another Caucus member as their proxy. Members are also likely to pick proxies from their state or region; 37% and 43% of active proxies are from the same state and region, respectively, as the representatives selecting them.

We also see legislators choosing proxies who they have reason to believe share their views on issues. The House Democratic Caucus has three main organized ideological groups—the Progressive Caucus, the New Democrat Coalition, and the Blue Dog Coalition—and roughly two-thirds of legislators with active proxies chose a fellow ideological caucus member. We also see this pattern on display when, using a standard political science measure of how liberal or conservative legislators are, we plot the ideology of each member selecting a proxy against the ideology of the individual they choose to cast their votes for them. In the figure below, we see that a member’s ideology (on the x-axis) appears to be at least somewhat related to the positions previously taken by their proxy (on the y-axis). 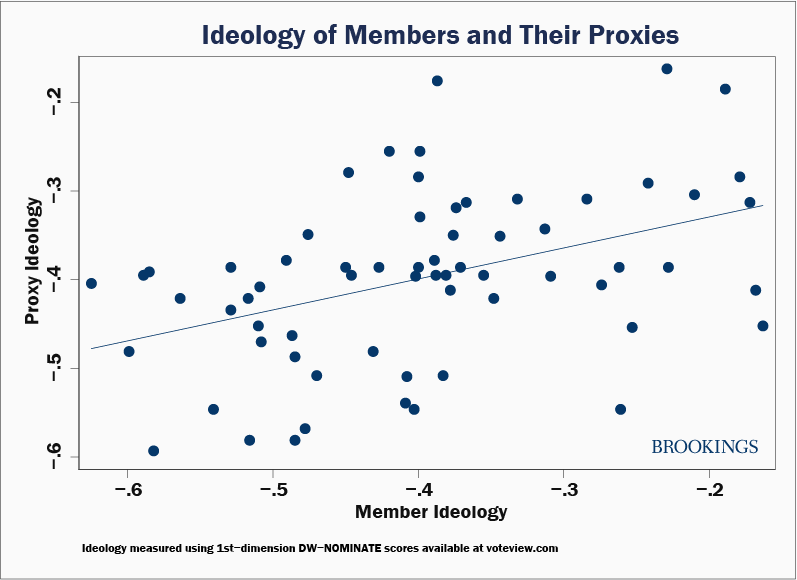 3. The decision to use the proxy option is based on practical considerations.

4. A small number of members hold a large share of the proxy designations.

While no member has reached the limit of 10 designations allowed under the proxy voting rules, many designations are concentrated in the hands of relatively few designees. Only 41 members serve as designees for the 65 members with active proxies, and four members hold three or more of these designations. Representatives Don Beyer (D-Va.) and Jamie Raskin (D-Md.) hold seven and three proxies, respectively—which is unsurprising, given that their districts border the District of Columbia. (Other members holding three or more are Dan Kildee (D-Mich.) (4) and Debbie Wasserman Schultz (D-Fla.) (3).)

With COVID-19 likely to affect congressional operations for the foreseeable future, proxy voting in the House is likely to play an important role in the chamber’s business—even if only a minority of members choose to avail themselves with the option to participate remotely.

Note: This piece has been updated to correct the number of roll call votes where at least one member had voted by proxy. There had been six votes at the time of publication rather than two.

We have become so dependent on technology — we use it for our groceries, we tap into it for our health care. And these companies have created a new stream of jobs, as we’ve seen other industries disrupted over the course of not just the pandemic, but the last few years. [...] We’re missing opportunities when we dismiss the potential of technology, not just from a consumption standpoint, but from a production and development standpoint.