As even casual observers of elections know, raw public opinion is only modestly instructive about likely results. If people don’t go to the polls, their views will not affect the outcome. Turnout always matters, and in close elections it can prove decisive.

So what do we know about likely turnout in 2016? The Pew Research Center has just released a comprehensive study of this year’s electoral terrain that sheds a great deal of light on this question. It also poses a puzzle.

Here are some of the key findings:

It is tempting to conclude that if interest in the election is high and most people think the outcome matters a lot, then turnout is likely to surge, all the more so because it fell by 4 points—from 62 to 58 percent—between 2008 and 2012. There is, it appears, plenty of room to grow.

On the other hand, voters strongly disapprove of the tone and substance of this year’s campaign, and they don’t much like the presidential candidates either. This could turn voters off and suppress turnout in November.

So here’s the puzzle: which matters more for turnout, voters’ interest in the election or their satisfaction with the candidates?

I put this question to Pew’s researchers, and they responded with the following table: 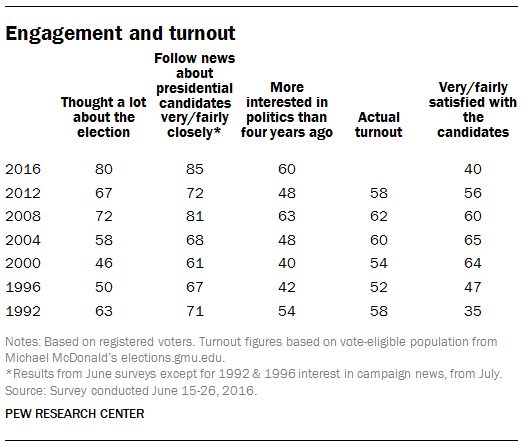 It appears that turnout can be relatively high even when voter satisfaction with the candidates is low, and vice versa. On the other hand, turnout tends to rise and fall in tandem with measures of voter interest and involvement. We would need a serious statistical analysis over a longer period of time to confirm these generalizations. Still, it is plausible that the Pew findings are pointing toward a higher turnout in 2016 than in 2012, perhaps as high as in 2008, although it is hard to be confident of that.

This conclusion raises another puzzle: why should turnout be high if enthusiasm for the candidates is low? Answer: voters who care a lot about the outcome (and as we have seen, three quarters of them do) will turn out in droves to vote against the candidate they despise.

According to the Pew study, 60 percent of George W. Bush’s supporters in 2000 said they cast their ballots for him, compared to only 33 percent who were voting against Al Gore. This year, fully 55 percent of Trump’s supporters say they will be voting to express their antipathy to Hillary Clinton compared to only 41 percent to signal approval for Mr. Trump. On the Democratic side in 2000, similarly the division between approval and antipathy was more than two to one (64 to 30 percent) compared to a nearly even split (48 to 50 percent) this year.

In this era of high polarization, we have become accustomed to high levels of mutual disapproval between political partisans. This year, disapproval is high within as well as between partisan ranks, setting the stage for what promises to be one of the most negative campaigns that any of us has ever experienced.

The challenge to democracy—overcoming the small state bias

Philip A. Wallach
Friday, July 1, 2022
Get daily updates from Brookings