On Super Tuesday, candidates were declared winners or losers according to the delegate count. Both Clinton and Trump have won a lion’s share of the states, and are poised to expand their lead in the delegate races. Lost in all the excitement is a little known fact. There might be a delegate count—it’s just that there are virtually no actual people chosen yet to serve as delegates and there won’t be very many for a while. In fact, at this point in time, there are mostly phantom delegates. Understanding this is critical to understanding why this wild election year may get wilder still—especially on the Republican side.

The remaining delegates awarded thus far will be elected in April, May and June in a variety of party caucuses, conventions and state executive committees. Generally these meetings are held long after the presidential campaigns have left town. For instance, take the all-important Iowa caucuses which took place on February 1st; Republicans won’t elect the first delegates there until April 9 and Democrats won’t elect theirs until April 30. Or consider the big prize from the Super Tuesday contest: Texas. Democrats there won’t actually elect the delegates who go to Philadelphia until June and Republicans won’t elect the delegates who go to Cleveland until May.

The following chart illustrates the timeline of selecting actual delegates in both parties. 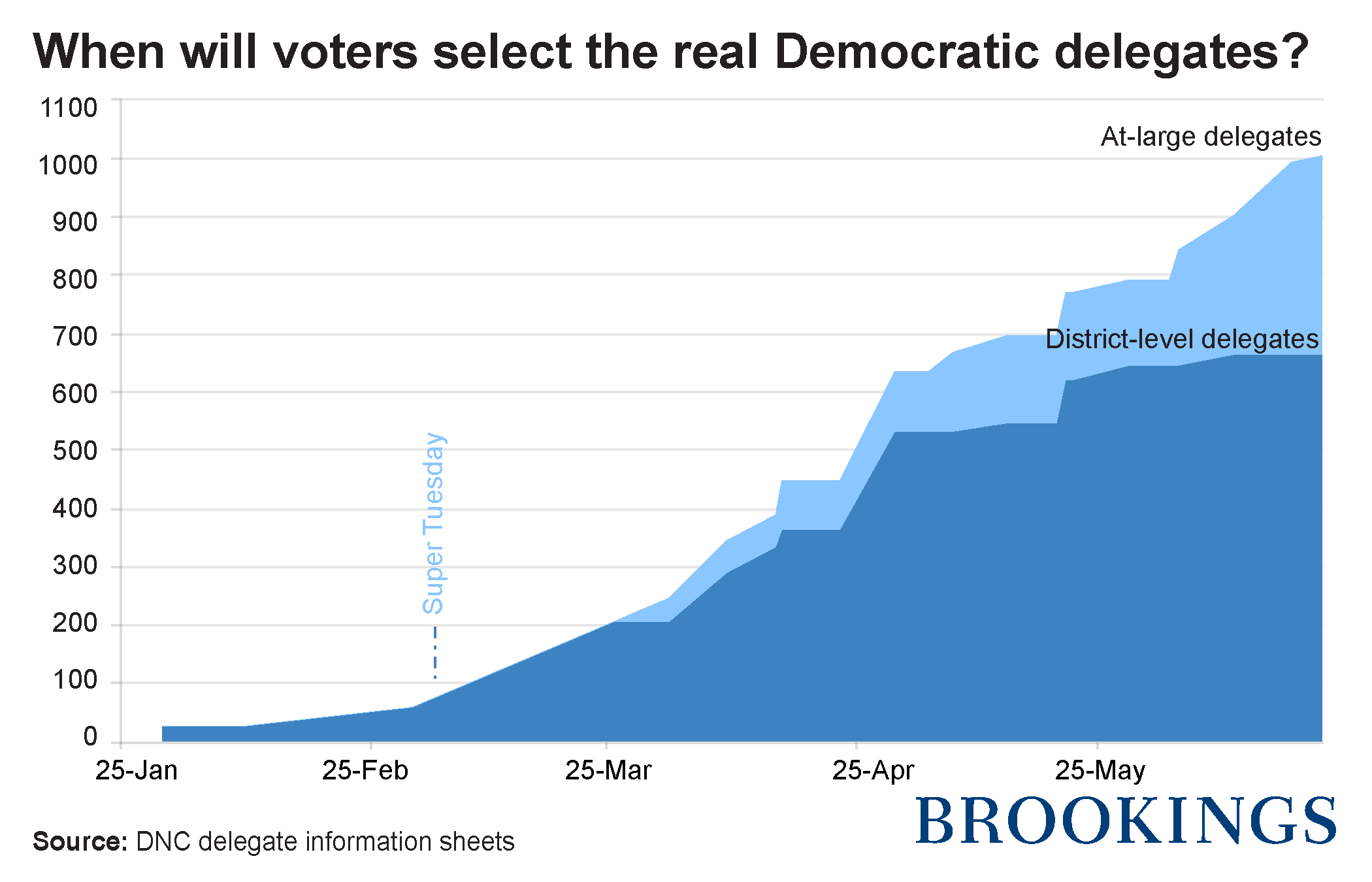 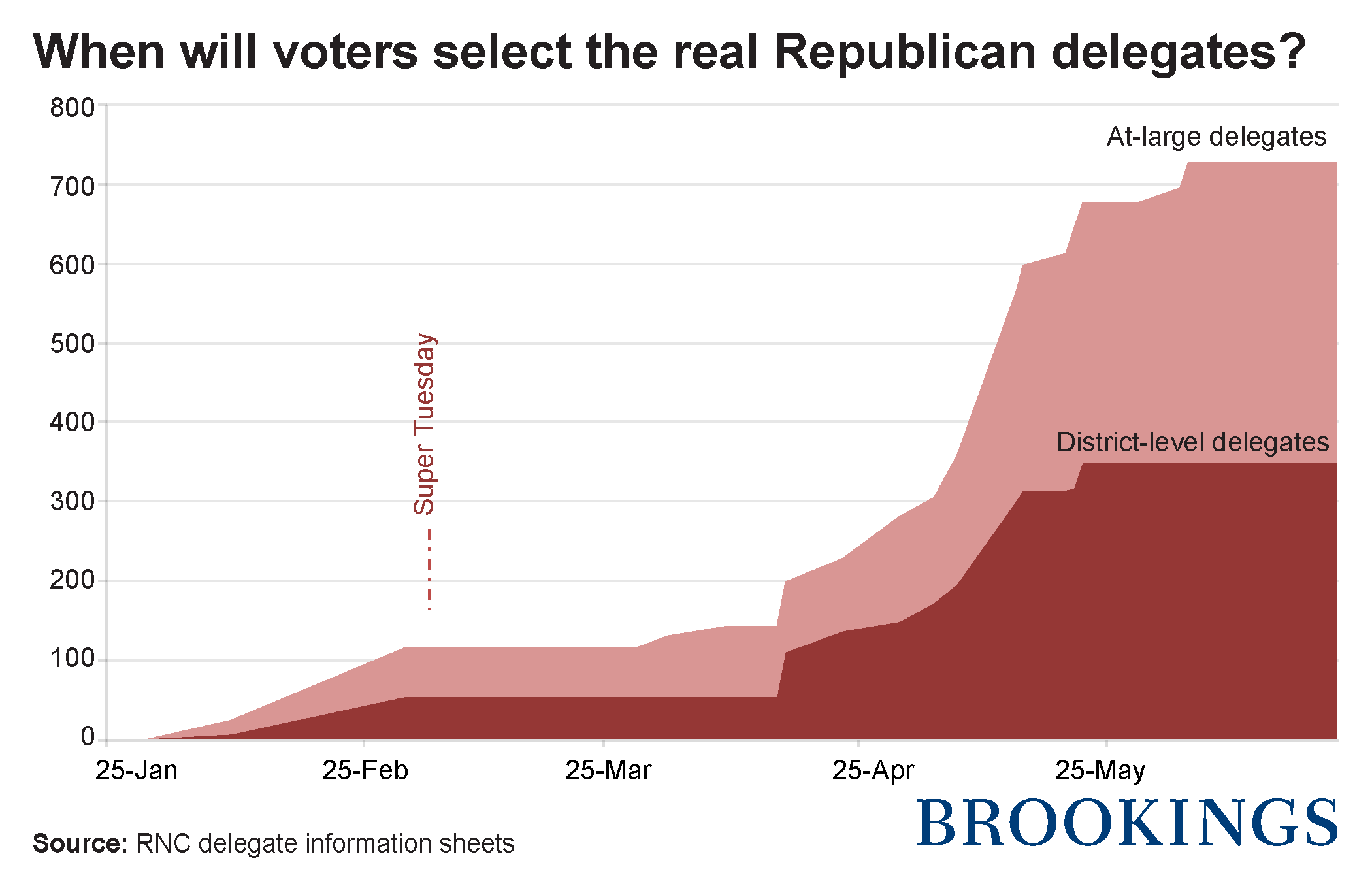 If you’ve stuck with this wonky explanation so far you may be wondering—“So what?” That’s a good question in an ordinary year. In an ordinary year, the delegates representing the presidential candidates are party activists who go to their conventions, don stupid elephant or donkey hats, and cheer for the television cameras on cue.

But, of course, the Republican side is really interesting. In the week leading up to Super Tuesday the Republican Party was in a full scale panic. Some of its leaders, such as Governor Chris Christie of New Jersey, bowed to what they felt was inevitable by endorsing Trump. Others such as Senate Majority Leader Mitch McConnell told colleagues we will dump Trump “like a hot rock” if he threatens their reelection.

And that’s why the identity of these yet-to-be-selected delegates matters so much. Most of the people who get elected to national conventions are party regulars and party activists. Some are ideologues but most, even the ideologues, have deep ties to the party. If Trump keeps up his venomous attacks on just about everyone all the way until June, and if party leaders at the state and local level worry that Trump at the top of the ticket will take down the rest of the Republican party, there could emerge an “Anybody but Trump” (ABT) movement in Cleveland which could lead to a possible brokered convention.

Then things would get really interesting. Two factors could lead to a scenario where no one has enough votes to get a first ballot nomination. At the last Republican convention in 2012 some party leaders tried to pass a rule allowing presidential candidates to approve the people who want to go to the convention representing them. (Democrats have a rule called “candidate right of approval” that allows presidential candidates to sanction delegate candidates.) The Republicans considered a version of this rule as a result of their experience in 2012 when supporters of Ron Paul filed for and won delegate slots belonging to Mitt Romney. Nonetheless, in 2012 the rule failed to be approved. Although there weren’t enough Ron Paul delegates to make much trouble in Tampa four years ago—one can imagine people who are “traditional” Republicans running for and winning delegate slots belonging to Trump this year especially given the fact that Trump does not have deep grass-roots ties in the GOP.

On the other hand, Republicans did pass a rule that binds delegates at least on the first ballot. Party Rule 16 a (2) that as follows:

On the other hand, most of what political parties do has been protected by the Supreme Court under the First Amendment right of association. Thus parties can change their rules at the convention. This usually happens in an early “test vote.” In 1980 the Democrats did just that and over the same issue. Senator Ted Kennedy tried to prevent President Jimmy Carter from getting a first ballot nomination. He called a similar rule to the Republican rule 16 a(2) the “robot rule” and waged one hell of a fight over it. He lost—but so did the Democrats.

America’s two major political parties haven’t had a brokered convention (one that went beyond the first ballot) since the middle of the last century. In 1948 the Republicans took three ballots to nominate Thomas Dewey and in 1952 the Democrats took three ballots to nominate Adlai Stevenson. When it comes to the nominating convention where there’s a will there’s a way. Super Tuesday’s delegate count is important but it is by no means definitive. Donald Trump has introduced an unprecedented amount of drama into this election season. And it may continue. As Yogi Berra used to say, “It’s not over until it’s over.”