Robert P. Jones, CEO of PRRI, kicked off the event with an overview of the survey, which consisted of interviews with nearly 2,700 adults representing all 50 states. The survey findings revealed some major fault lines in American society and highlighted the issues that will likely dominate the 2016 campaign. Jones began his presentation with a brief summary of current attitudes towards the 2016 presidential candidates. On the Democratic side, Hillary Clinton retains a commanding lead over her opponents with support from 62 percent of likely primary voters. Donald Trump and Ben Carson share equal support (25 percent) among all Republicans, with Carson holding a slight lead (27 percent) over Trump (20 percent) among likely Republican primary voters.

In thinking about the election, Jones underscored the top three critical issues Americans feel they face. About six in ten Americans cite health care, terrorism, and jobs and unemployment as critical issues. (This survey was in the field prior to the terrorist attacks in Paris). Meanwhile, Jones noted partisan gaps of nearly thirty points between Democrats and Republicans over the importance of issues such as climate change, terrorism, the cost of education, and the growing gap between the rich and the poor. 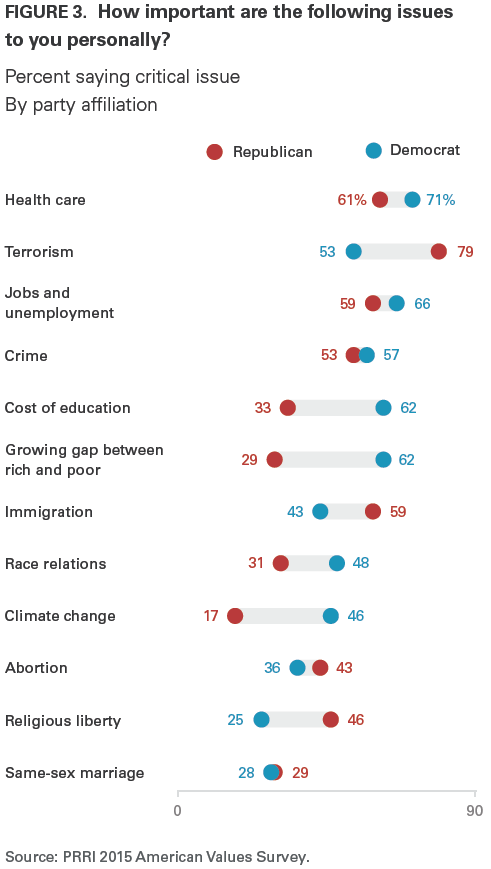 Jones then turned to Americans’ increasing pessimism about the country’s future. The survey asked respondents about the major problems they face in their own communities. Roughly half said that crime (48 percent) was a major issue, along with lack of opportunities for young people (51 percent) and lack of funding for public schools (51 percent). Jones noted the fact that blacks and Hispanics were much more likely than whites to cite crime, racial tensions, lack of opportunities for young people, and mistreatment of people by police as major problems in their communities. These divisions could lead to dramatic differences in Americans’ life experiences. Overall, Jones said, there was a substantial uptick in concern over crime, racial tensions and illegal immigration from 2012 to 2015, adding to the current sense of unease in American society.

Lastly, Jones turned to economic anxiety in the country. Seven in ten Americans still believe we are in an economic recession, he said, and equal opportunity has emerged as a major issue of concern. Jones noted a ten-point increase from 2014 in the percentage of people who say that one of the big problems in this country is that we don’t give everyone an equal chance in life. Today, nearly two thirds of Americans hold this view. The sense that the deck is being stacked against you, Jones said, is alive and well. 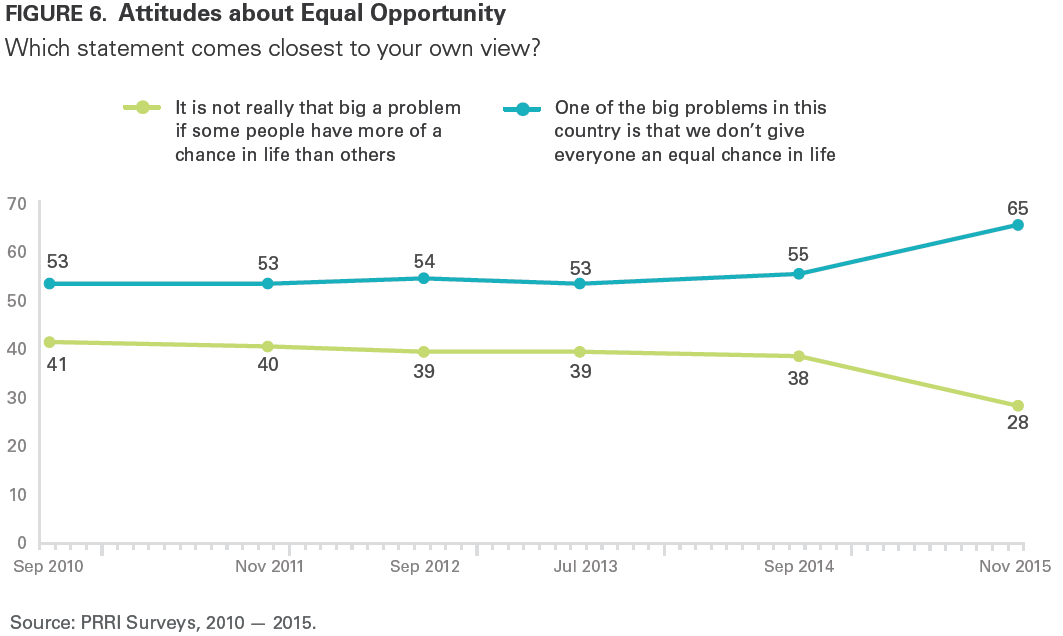 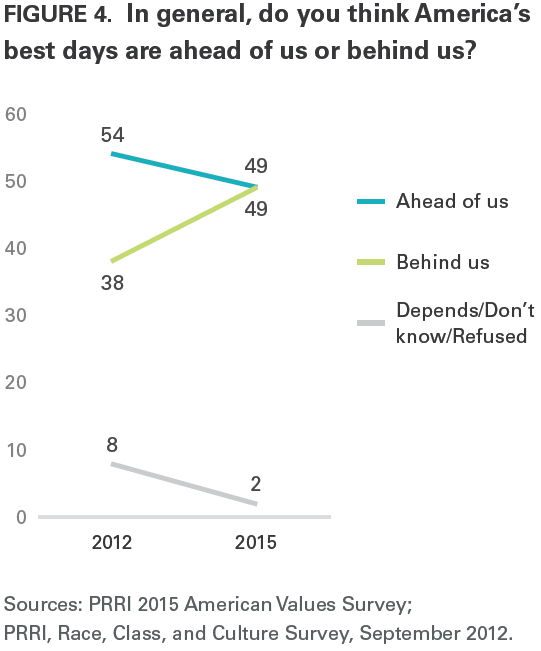 At this point, Jones turned it over to the panel which consisted of Brookings Senior Fellows E.J. Dionne Jr. and William Galston, Karlyn Bowman of the American Enterprise Institute, Joy Reid of MSNBC, and Henry Olsen of the Ethics and Public Policy Center.

Karlyn Bowman began by saying there are times when the public’s voice is truly distinct. One such moment was the fall of 2008 when many believed the country’s economic system would collapse. Fear dominated public sentiment, and the poll results we see today reflect the notion that Americans are not yet confident we have fixed what went wrong. Bowman called it the “hangover from 2008,” and said that this distrust, coupled with a long period of stagnating wages, helps explain the persistent economic anxiety many Americans feel. It also explains why 64 percent of respondents said hard work and determination are no guarantee of success. Concerns about opportunity, Bowman said, outweigh concerns about inequality in almost every survey.

Henry Olsen explored the unique attitudes of the white working class and what this means for American politics. Olsen said the data show that on virtually every measure of anxiety, white working class respondents are more anxious and more depressed than any other group. He noted they are more likely to think we are still in a recession (78 percent), more likely to think America’s best days are in the past (56 percent), more likely to say that U.S. culture has gotten worse since the 1950s (62 percent), and more likely to say hard work does not lead to success (68 percent). Olsen also pointed out that for several years now, white working class Americans have been much more pessimistic about their own future than white college educated Americans, Hispanics and African Americans. This is due in part, Olsen said, to the fact that most working class Americans without a college degree have not seen significant wage increases since the Clinton administration. Olsen also described a feeling among this group of a loss of public respect and influence—the result of declining economic prospects and a growing elite class that does not share the same needs and values.

Joy Reid drew comparisons between anxieties felt in the 1960s and 1970s to those Americans (particularly white working class and evangelicals) say they are experiencing now. Reid argued that we see a lot of the same discomfort with rapid cultural change today, particularly among white men. Donald Trump, Reid said, resonates with this segment of the population. Reid also described the Republican Party’s “three-legged stool” which she argued is comprised of blue collar workers, evangelicals and the establishment. In order to win the nomination, a candidate must appeal to at least two of these three factions. Reid concluded that she does not see evidence that any of the Republican candidates are currently capable of doing this. She also added that racial tensions are as intense now as they were in the 1960s and 1970s.

Bill Galston played on the nostalgia theme and described the 1960s political holy trinity—race, class and gender. This year, Galston said, is the revenge of class. Whether it is Donald Trump’s populist right or Bernie Sanders’ democratic socialism on the left, socioeconomic concerns are front and center. Galston argued for the need for broadly shared, inclusive economic growth. This, he said, could powerfully shift American attitudes.

EJ Dionne Jr. spoke about two very different stories he believed the survey depicts. One, he said, tells of the polarization of the two political parties on a whole range of issues related to race, immigration, and social issues. The other, he argued, is the story of social democratic America where there is broad agreement across party lines on a series of questions about economic inequities. Americans in both parties support policies for paid sick and parental leave, and hold negative views of the power and influence of big businesses and corporations. The Democrats, Dionne said, will structure the 2016 campaign on these latter economic issues, while Republicans will try to steer the conversation toward the former concerns about immigration and security.