The U.S. Postal Service was created more than 200 years ago and may be the country’s oldest continuously operating business. But like the candle makers and the buggy whip makers that ran prosperous businesses back when Ben Franklin was the first Postmaster General, the Postal Service is becoming obsolete.

To understand this crisis of obsolescence, all you really need to do is ask yourself when was the last time you got an actual letter, addressed to you in the mail with a stamp on it. Even Christmas cards and wedding invitations are going electronic. And so the main business of the service is withering away. This past quarter, revenue grew—thanks to the holiday season—but so did losses. 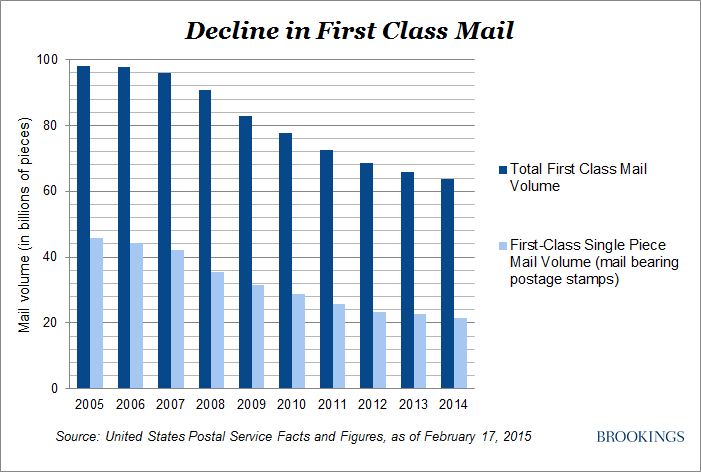 This debate has led to a wide range of suggestions. For instance, some argue that the Postal Service should get into new lines of business—from delivering groceries to teaming up with retailers to deliver packages on the same day they are ordered. But this raises the thorny question of subsidies. To what extent do the U.S. government subsidies for the service create an unfair playing field for all those who are already in the private marketplace delivering everything from groceries to clothing?

Others argue that the Postal Service needs to bite the bullet and get rid of Saturday service. This would save large amounts of money but it would also reduce the workforce. In a similar vein, some argue that more post offices need to be closed.

These options open up big and challenging questions such as the relevance of the universal mandate (the requirement that mail be delivered everywhere no matter how remote) in the Internet age? Will the postal service be the next bailout?

But perhaps the biggest challenge facing the Postal Service is the inability of Congress to agree to a sensible plan for its future. One of the few exceptions to the benign neglect shown by most of Congress is Senator Tom Carper (D-DE) who said last December, “Because of Congress’ inability to come to a consensus on post reform legislation this year, the Postal Service’s fate continues to twist in the wind.”

Tomorrow, Brookings will host a forum on the future of the U.S. Postal Service in the hopes that lawmakers can stop kicking the can down the road and grapple with a problem that doesn’t seem to be going away.