As the House debated amendments to the Department of Homeland Security appropriations legislation this week—amendments that sought to reverse the president’s recent executive actions—Democrats and immigration advocacy groups reacted with anger. The amendments are the latest battle in a war between the White House and Congress over immigration policy and the boundaries of power between the legislative and executive branches.

Previously on this blog, I have written that President Obama was acting within the constitutional, statutory, and legal bounds of his office in issuing the previous executive actions. Relying on prosecutorial discretion, exercising discretion in spending, and exploiting vague provisions within statutes is common practice among presidents trying to enact policy in areas where Congress has been sluggish or left open the door to change. Presidential power can be mighty in the American system, and Mr. Obama capitalized both on that power and on the promises he made in the 2012 campaign and after.

Now it is congressional Republicans’ turn. In the wake of the 2014 midterm elections, Republicans expanded their majority in the House of Representatives, picked up a majority in the Senate and now control both houses of Congress. They now have power, prerogative, and policy making capacity—in a more pronounced way than before—and they seek to wield it. President Obama has often spoken of elections having consequences, and he is absolutely right. The House’s efforts, this week, to reverse the President’s executive actions are among the consequences of the 2014 election.

Defenders of the President’s actions on subjective or public policy grounds surely have reason to be angry. Congressional efforts to undo these actions will have substantial effects on policy, if they go into effect. However, those who defended the President’s actions on the grounds of capacity, power, and the rule of law (as I have done repeatedly), must also defend what the Congress seeks to do.

The balance of power between the branches is not static. When Congress feels executive actions go too far, they have a series of paths to rein in the president. They can do so through limiting funding, by closing off the valves of delegated powers, or by filling in the blanks of vague statutory provisions upon which presidential power thrives. This is legislative power, and Congress is absolutely within its bounds to exercise this legislative power. In fact, those who believe the presidency has grown too powerful—regardless of their position on immigration policy—should applaud House efforts to limit the power of the executive.

Each amendment, and the appropriations bill (funding DHS through September 30th), passed: 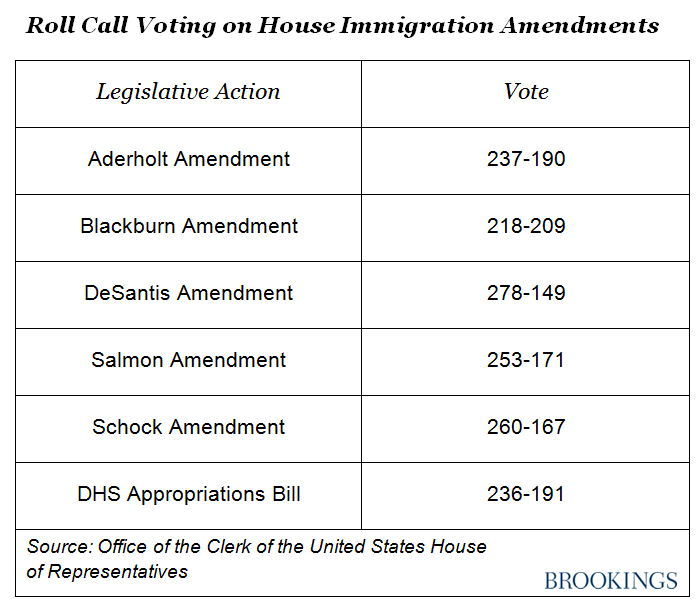 The amendments had varying support among Republicans and Democrats, but ultimately the House had the muscle to push through each. The final vote on passage of the appropriations bill for DHS saw only two Democrats vote in favor of it and only ten House Republicans voted against the bill.

Despite necessary or substantial House support, the future of the funding bill and the associated amendments may have a more difficult path to passage in the US Senate, where a few Republicans with moderate views on the issue could force negotiation the amendments before final passage.

However, the outcome of this week’s House votes on the immigration amendments should also come as no surprise. Opposition to immigration reform broadly, and the immigration actions specifically, were a common topic of conversation on the 2014 campaign trail.

Brookings’ Primaries Project measured candidate views on the issue of immigration. The findings would suggest the House’s decision to pass such amendments is consistent with campaign trail promises, candidate websites, and political ads. Among Republican nominees for House seats, only 4.17% supported Comprehensive Immigration Reform (CIR). Among nominees, 44.27% outwardly opposed it; 13.02% had a “complicated” view, while 38.5% remained silent on the issue.

The numbers were more glaring for Republicans who won their House races. Only 3.32% supported CIR. A majority—54.77%–opposed CIR. Of the remaining members, 15.35% had a “complicated” position and 26.56% remained silent on the issue. These numbers were calculated on the issue of Comprehensive Immigration Reform, not the president’s executive action or presidential power specifically—where one would assume Republican opposition would be even stronger.

America elected a Republican majority to the US House of Representatives (and the Senate). Part of the GOP message in that campaign was that the President’s “out of control” and “unconstitutional” actions needed to be stopped. This week, the US House made good on the promise it made to voters just a few short months ago. Love it or hate it, Republicans are doing what they said they would do. And ironically, the House GOP has shown Mr. Obama that he is absolutely right: elections do have consequences.