For years politicians have looked for ways to identify and publicize waste, fraud, and abuse in order to cut the federal budget.  For more than a decade, 1975 – 1988, Senator William Proxmire (D-WI) published the “Golden Fleece Award.”  Since 2010 Senator Tom Coburn (R-OK) has published an annual “Wastebook” documenting 100 examples of the most outlandish spending that he can find.  I have long been an admirer of Coburn’s sincerity and honesty in fighting for smaller government; he has always struck me as a genuine fiscal conservative, willing to come to the table and act responsibly even when he can’t get his favorite outcomes. But, as we will see, lists of waste, fraud, and abuse tend to make for good headlines but poor guidance for budget cuts.

Coburn’s passion for revealing waste consistently generates headlines.  In 2013’s Wastebook, with headlining cases including “$385G duck penis study” and “Funding for Facebook friends,” Coburn and his staff reach the astounding grand total of $30 billion.  Set against federal expenditures in FY13 of $3,450 billion, that number may seem small—but actually, if nearly 1% of federal spending were egregiously wasteful that would really be very upsetting.  Can we really save 1% just by saying no to duck penis research (no matter how fascinating that may be)?

Unfortunately, the answer is no; like earlier examples that made headlines but didn’t end up cutting the budget, the Wastebook’s $30 billion number is rather misleading, composed in large part by a few expenditures that aren’t so clearly egregious.  In this post, I explain how Coburn gets to that number.  Coburn is right that we should be able to find real savings by targeting waste; but ultimately wrong to imply we can do so through the politically painless means of cutting frivolous and outrageous expenditures.  Reaping savings from more efficient government often means investing in government.

Coburn really does find some hair-raising expenditures for his report.  But quite a lot of the entries just don’t matter much to the overall budget; including them is amusing, but only readers with problems thinking about orders of magnitude (or those who just don’t stop to think about it) will understand them as representing a very serious issue.  Take #68, for example.  The National Endowment for the Arts apparently made a $10,000 grant to support “Mooseltoe: A New Moosical,” to tour the nation during holiday season 2013.  Grinch that I am, that does seem nauseating.  But to get to $30 billion, you would need 3 million such abominations, rather than a 100-item list.

But let’s look at all of the big ticket items Coburn includes on his list, defined as all those costing $100 million or more.

Coburn’s three largest items together add up to a purported $21.6 billion in waste, or 72% of the headline number.  None turns out to offer very low-hanging savings.

#7. “Mass Destruction of Weapons – (DoD) $7 billion.”  $7 billion is some real money.  The military is using that budget to destroy “approximately 20 percent of the total war material the U.S. military has in Afghanistan.”  Coburn is outraged that the Defense Department can’t figure out a way to conserve all that equipment for later conflicts by shipping it home to the U.S., citing one Lieutenant General who agrees that this would be the best value.  But the military has clearly considered the costs and benefits of shipping versus scrapping—it has plans to ship out a great deal of material, including 9,000 mine-resistant vehicles.   A military spokesperson explained to NBC’s Ali Weinberg that many older vehicles are destined to be transferred to allies, which will benefit U.S. strategic interests without endangering troops protecting overseas transport plans.  Coburn may be right that there was over-investment in military material in the first place, but then again it’s hardly so crazy to think that we might be willing to be a bit wasteful if it saves the lives of some Americans bravely serving their country.  In any case, it certainly isn’t the classic story of bureaucrat-driven waste.

#57. “Federal Government Paying Salaries to Hundreds of Thousands of Tax Cheats – $3.6 billion.”  Here Coburn seems to be rather deceptive.  His logic here: some federal employees are apparently delinquent on their taxes.  (Note that a big chunk of these are active and retired military.)  Coburn suggests that each and every one of these people should be ejected from public service (apparently giving no consideration to the possibility that there might be good faith miscalculations on either side), and then, bizarrely,  decides to count the amount that these people are supposedly (according to the IRS) behind on their taxes as wasted current spending.  That’s a totally inappropriate stock/flow confusion.

#93. “Confusing Earned Income Tax Credit Results in Billions in Improper EITC payments – (IRS) $11 billion”: Coburn’s biggest single item is a well-known issue with the Earned Income Tax Credit, which gets paid to many people who are ineligible every year.  Indeed, it is so well known that President Obama issued Executive Order 13520 addressing it on November 20, 2009; IRS failure to follow through on this directive has resulted in numerous Treasury Inspector General reports on the subject, including one from August 2013.  Hopefully that will generate some real progress; if not, then it’s a real cause for concern.  But note that the single biggest item on the Wastebook list (accounting for 36.7% of the total amount) is already receiving attention.  Perhaps it should be an even bigger political cause célèbre, and perhaps Congress should get on the case by passing legislation to make the EITC easier to administer; but this isn’t a case of big-bureaucratic-waste-that-nobody-even-noticed.

Reviewing the Wastebook’s Other Items Over $100 Million 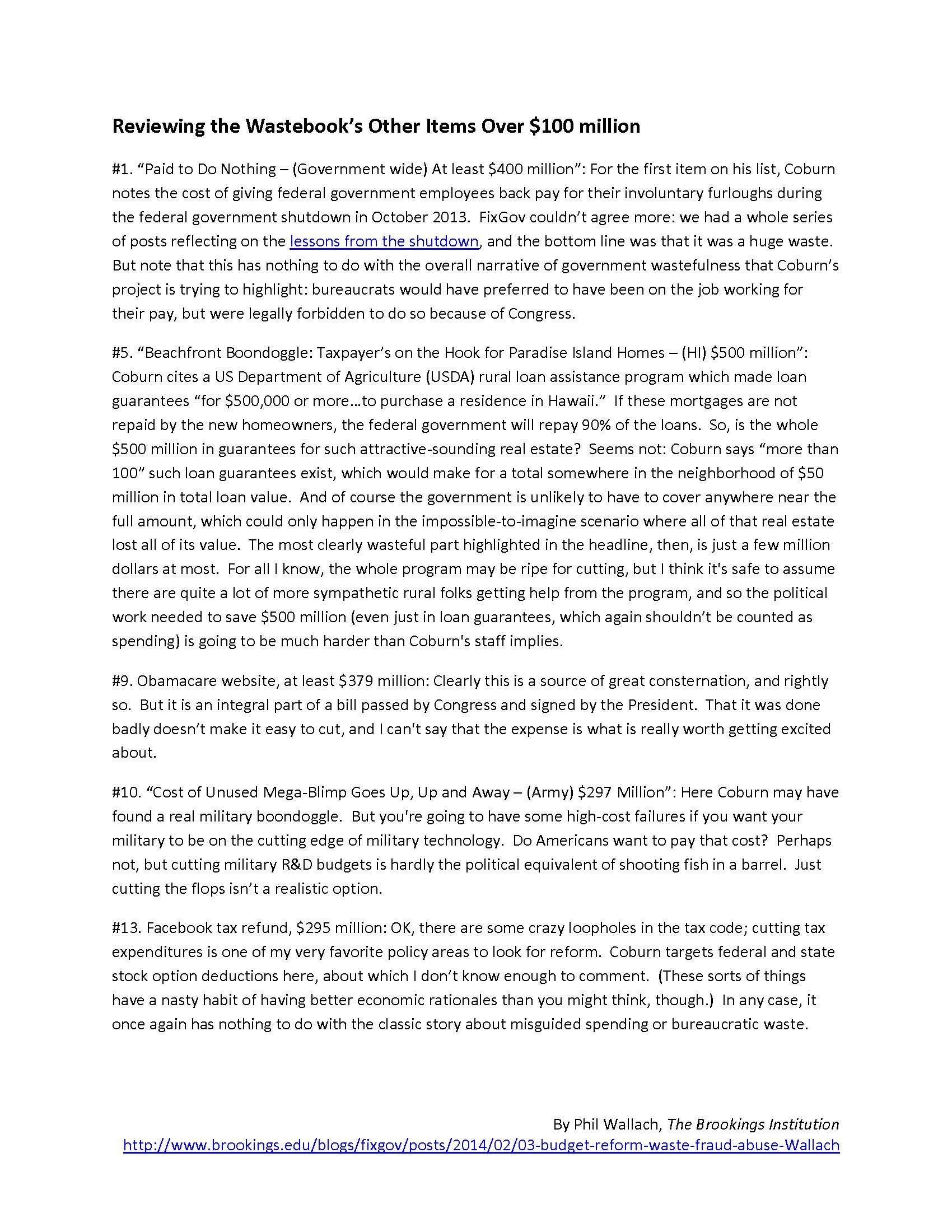 See the attached file for a look at all of Coburn’s other big- or medium-ticket items costing over $100 million.  As is quickly apparent, reaping savings from those programs would rarely be simple or politically easy. So, how is Coburn getting to his $30 billion number?  (Hint: it isn’t through duck penis studies.)

His three largest items combine to account for 72% of the headline number.  As noted above, the EITC problem is most definitely getting addressed, though maybe we should be doing more.  The destruction of war material seems like it might well have a legitimate strategic purpose.  The back taxes are just not appropriate to count as a problem of federal spending waste: it’s a stock owed, not a flow, and in any case it isn’t clear how extraordinary these federal employees’ tax problems are.  Color me underwhelmed.

Just as problematic, the Wastebook never tells us how we are supposed to go about reaping the savings from prevention of the waste, fraud, and abuse it has highlighted.  A big part of the answer, which libertarian-minded folks sometimes have a hard time wrapping their heads around, is that we must be willing to invest in government to realize savings.

Cracking down on tax cheats (as in #57, highlighted in the figure) is probably a worthwhile investment—but it requires putting our trust in the IRS and strengthening its capacity to detect and pursue those who break the rules.  The same is true for efforts to avoid fraud in hundreds of federal programs: we have to spend money to save money.  Portraying the federal government as so wasteful as to make additional investments unbearable can have the effect of foreclosing the path to a more efficient and ultimately less costly government.

A great example is America’s disability insurance system, which has become a kind of shadow welfare system.   Coburn’s decision not to include this in the Wastebook is quite odd, given that he has provided real leadership on the issue, including overseeing the writing of a Senate report on misconduct in the program.  As This American Life memorably reported last year, some doctors have appointed themselves arbiters of who ought to get federal support, finding people disabled or not based on their job prospects.  (For more on the subjectivity of disability and its sensitivity to economic and political conditions, I recommend the work of Rourke O’Brien.)

According to a Hamilton Project proposal by Jeffrey Liebman and Jack Smalligan, evidence-based disability insurance reform could save $10-$20 billion over 10 years.  One of the biggest obstacles is a resistance to the up-front spending needed to realize these savings: such an expenditure would be on-budget, while the savings for the Social Security system would be categorized as mandatory spending.  Congress needs to see beyond these distinctions to invest in more administrative capacity (waiving PAYGO requirements would be totally appropriate here).  Fixing this problem would take money away from some sympathetic people, but the haphazard and often arbitrary growth of our disability system is no way to shape a legitimate social safety net.

I don’t mean to pick on Coburn too much, as I have great respect for his work on this issue over his career.  The Wastebook can be taken as good fun, spreading its own variety of holiday cheer.  There is plenty of inanity in this world, and in our federal government, worth laughing at.

But when we think about eliminating waste, fraud, and abuse, we should understand that they often persist because there are powerful constituencies ensuring their continuation or because they are structurally difficult to root out.   Fixing them requires picking some hard fights on the taxpayers’ behalf, not expecting that our legislators will just chuckle through a voice vote that extirpates the ridiculous from federal spending.  As he ends his career in the Senate, Coburn surely knows this all too well; readers of the Wastebook who wish for smaller government would be well served by pondering it.