Gridlock and divisiveness in Congress exists not just between House and Senate, but within each chamber. It’s no secret that floor dynamics in the House of Representatives are heavily influenced by sharp ideological differences between the parties and a very high level of unity within each party. As has been profiled and described in Brookings’ Vital Statistics on Congress, party polarization first surfaced dramatically in the 104th Congress, and now the most “conservative” Democrat is consistently more liberal than the most “liberal” Republican. 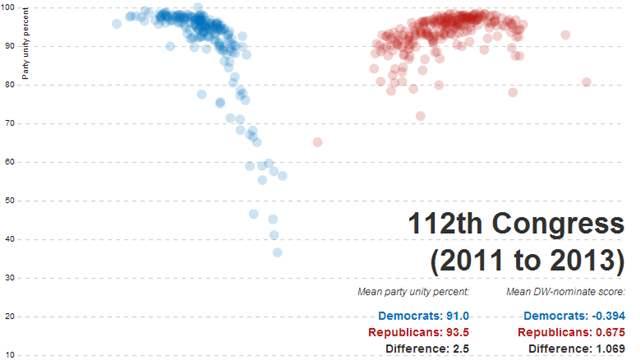 The juxtaposition of historical data on party unity and ideology in this graphic illustrates how these factors have interacted with House members over time. Today, the Republican Party is markedly more cohesive than the Democratic Party and more ideologically consistent.

In the 112th Congress, Republican House members scored between 65% and 100% on party unity (meaning, all Republicans voted more than half the time with the rest of their party), while Democratic Party unity plunged as low as 35%. Similarly, the vast majority of Republicans in the 112th Congress fell within a tight ideological range, while Democrats revealed more diverse ideological viewpoints.

Partisan polarization, thus, reflects both ideological differences between the parties as well as sheer partisan team play. It will be fascinating to see if these patterns persist as internal struggles within the GOP gain traction.

Lessons from the 2022 Primaries – what do they tell us about America’s political parties and the midterm elections?

Is abortion policy pushing Latinos back towards the Democratic Party?

How a stockholding ban could change Congress