Twenty children sit in the miniature courtyard in front of a central “mosque” built of beautiful designs beneath a rich lattice structure. In front of them, a fountain filled—not with water—but with handwritten notes from the Asian, black, Hispanic, and white preschoolers who were challenged to write their wishes for a better world.

The exhibit was in many ways like others found in children’s museum settings.  Playful learning abounds as pretend sailors work collaboratively to place coconuts and special pots on the big ship bound for the Americas. Children climb atop a large camel, poised in front of pictures from the African deserts. Shops carry beautifully woven Moroccan rugs bearing designs native to North Africa, custom-made in Morocco for the exhibit. The shops—of rugs, rarely found fruits from Indonesia and spices from Egypt are modeled after those in the home country. But in real streets in Queens, Brooklyn, and Harlem—within a few miles of the museum itself—these same items can all be found. In this miniature world, children have implicit lessons in counting and spatial arrangements, skills reinforced in the block-building area where six children are busily constructing architectural wonders with Arabesque flare. 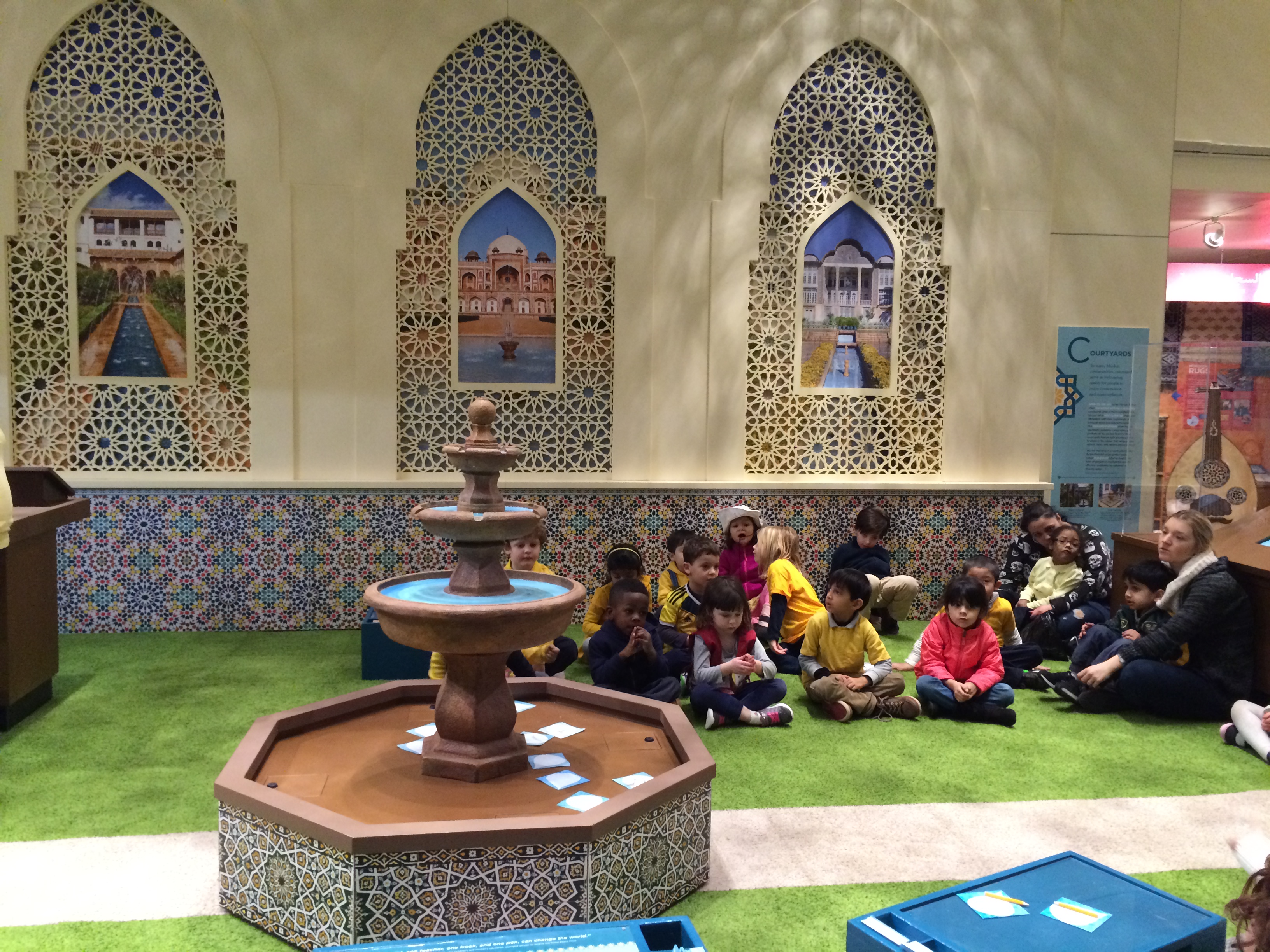 Children attend the “America to Zanzibar” exhibit at the Children’s Museum of Manhattan, which celebrates the diversity of Muslim cultures in America and around the world.

Children’s museums are hubs where discovers and explorers unite to learn precisely those skills that prepare them for learning in a fast-paced 21st century world—collaboration, communication, content (physics, math, narrative), critical thinking (problem solving that helps them construct the beautiful mosques), creativity, and confidence (to take intellectual risks). These “6Cs” are an integrated suite of skills born from research in the science of learning—skills that we argue are the key to Becoming Brilliant, our forthcoming book to be released this summer.

One could stop here, admiring the beautifully conceived and richly researched context for playful learning that emerges in the Muslim Cultures exhibit. One could merely see this as a place to groom 21st century skills and real learning. To do so, however, would cheapen the breadth of the experience for children and their families.

When you enter the central courtyard at the Muslim exhibit, children are also transported to a new culture. They are invited to understand more about the varied people who make up the tapestry of New York, and of America itself. To the west of the exhibit courtyard—children can see and experiment with instruments from across the Muslim world. Apps in the museum even give them a chance to listen to and interact with the sounds of the culture. To the east of the courtyard, they can trace their name in Arabic, and in the far reaches of the exhibit they can go on a virtual Google map journey to beautiful mosques around the world—all designed in surround visuals to transport, immerse, and inform. Here, children go into the homes and shops of their Muslim neighbors and see that “Muslim” is not just a singular noun; it represents a diverse set of people and customs. 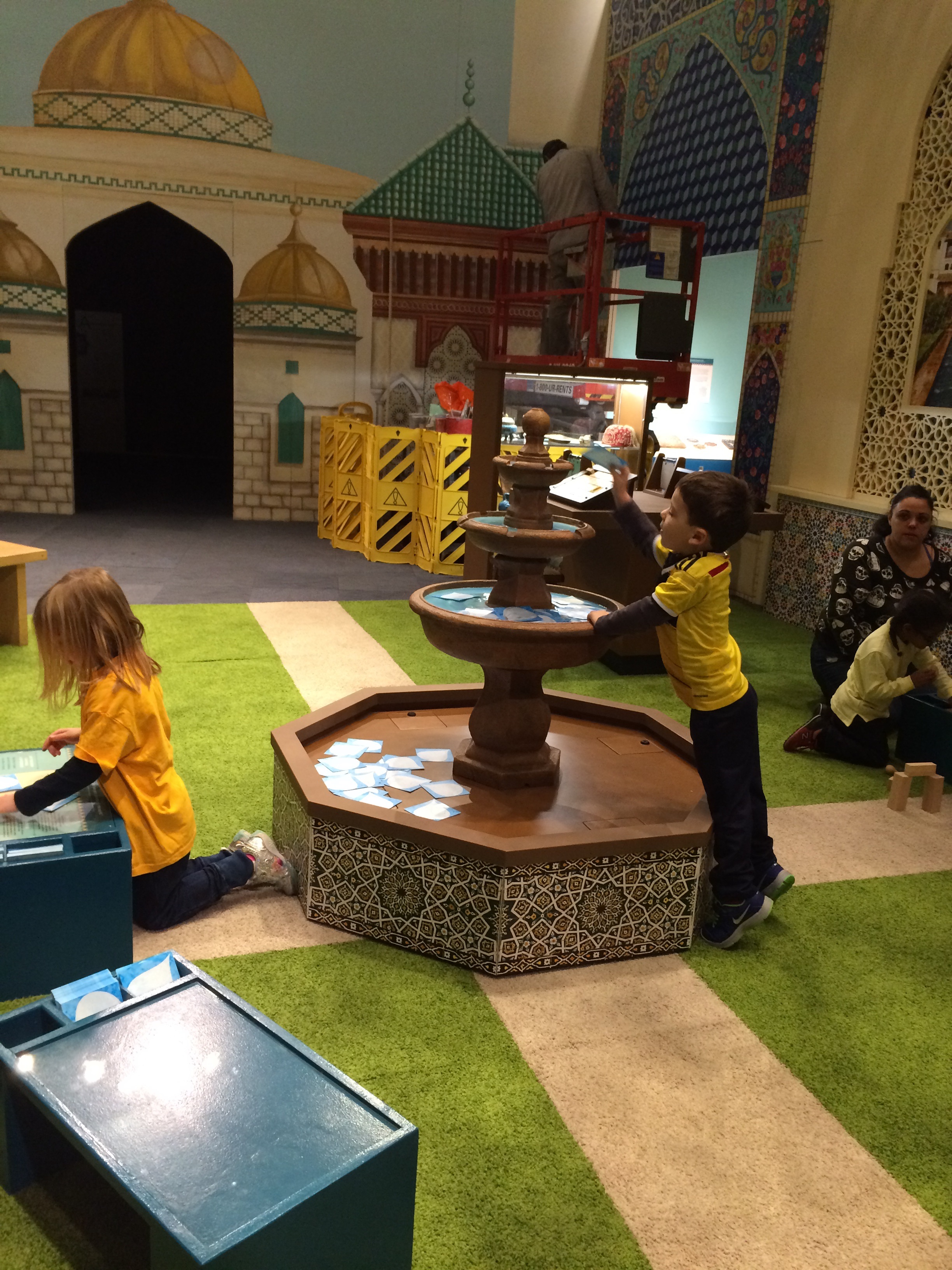 A young boy plays in front of the community water fountain in the courtyard of the “America to Zanzibar” exhibit held at the Children’s Museum of Manhattan.

Creating a Muslim Cultures exhibit in a children’s museum, right in New York, is a bold move.  It is a stake in the ground against racism and it is a statement that if we are going to change our attitudes and behaviors about people different than we are, we must do so by learning more and by respecting others.

In a sense, the Muslim Cultures exhibit at the Children’s Museum of Manhattan (CMOM) is an act of faith that our children will appreciate this exhibit as they have others. In their eyes, differences among people nourish a world of possibilities—of new sounds and sights that foster the creative spirit. Children seem to understand that we are united, not separated, by our differences. Perhaps we can all learn from children’s play and from the way children of all shades and religions interact in this exhibit. Perhaps we too can add to that fountain of wishes, encouraging more institutions to shine a spotlight on the riches of Muslim culture in an era that is often punitive and disrespectful to our fellow Americans. Thank you CMOM for enabling playful learning that not only feeds our minds but also our social conscience.