Earlier this December, a new set of data on learning outcomes was released corresponding to the Third Comparative Latin America Study. The data was collected by most Latin American Ministries of Education, which have since 1994 conducted comparative studies on learning outcomes in the region. The results recently released refer to changes between 2006 and 2013 in reading and math skills in grades 3 and 6, as well as natural sciences in grade 6. Fourteen countries and one Mexican state participated in both the 2006 and 2013 studies.

The first exciting element of these new results is the pattern in performance changes: in reading, the countries that improved the most (see Figure 1) are those which were lagging behind in 2006. This might mean that the poor results in the past have encouraged some decisive action in the reading arena. However, the magnitude of the changes can be very different for countries with similar mean performances in 2006. For instance, Peru, Panama, Paraguay, and Nicaragua had a similar mean performance in reading among grade 3 students in 2006, but Peru improved almost half a standard deviation by 2013, whereas Panama and Paraguay improved much less than that. 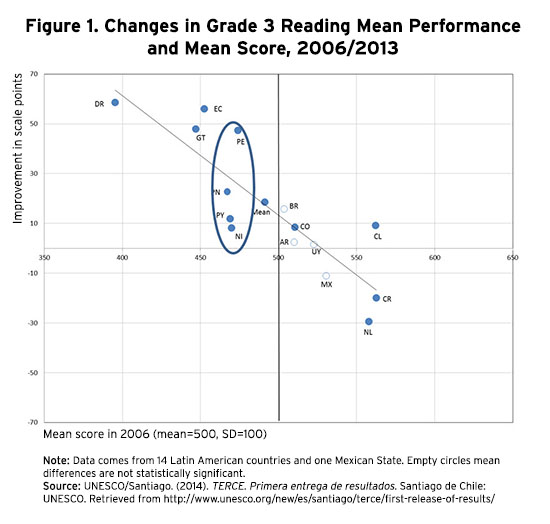 It should be noted that for a small number of countries there are no improvements between 2006 and 2013. Moreover, results indicate decreasing performance in Costa Rica, Mexico, Uruguay and Paraguay.

Despite these cases, the mean performance of the participating Latin American countries has improved. This contrasts sharply with the situation in OECD countries, where the average performance on PISA tests has remained steady over a 12 year period. It goes without saying that improvement is easier when starting conditions are worse off; however, it cannot be assumed that mean performance in OECD countries is already satisfactory. It is also important to notice that for most of the participating countries, the period between 2006 and 2013 has been one of good economic performance, which has translated into an improvement in the overall living conditions of their populations.

These newly released results portray a heterogeneous situation in Latin America and highlight the important disparities among these countries. Further results are set to be released in 2015, and will allow for further study of disparities and inequities within countries—another element of crucial importance in Latin American societies.

Who’s getting pulled in weed-out courses for STEM majors?

Training and support for female entrepreneurs in Vietnam: What do women want and need?

Who’s ready to change? Tracking adaptations during scaling in education