This week, the Global Partnership for Education meets in Brussels with the hope of raising $3.5 billion for the education of the world’s most marginalized children. The countries furthest from Education for All (EFA) goals and Millennium Development Goals (MDGs) are settings of fragility. These countries have traditionally been challenged to attract funding, with overseas development assistance (ODA) channeled primarily toward “good performers” with strong records of good governance. The assumption has been that investment in education is only wise once good governance has been established.

The Global Partnership for Education’s (GPE) new investment strategy, however, turns this assumption on its head. The number of fragile states funded by GPE, for example, grew exponentially, from 1 in 2003 (when GPE was called the Fast Track Initiative) to 22 in 2013. Can investment in education strengthen governance? The GPE’s investment suggests a belief in this pathway. What does the evidence say?

The direction of causality is still uncertain, but our exploratory analyses show a stronger relationship between high levels of education in the mid-1990s and good governance in recent years than vice versa.

Overall, we see the potential of universal education—for which we use primary net enrollment and primary survival rates as proxies—to act on three elements of governance: voice and accountability, control of corruption, and political instability and violence. These are the three elements of the World Bank’s Good Governance Indicators that we find to be most relevant to education. Across these domains, there are three key mechanisms by which universal education might promote good governance:

Elizabeth Adelman is a doctoral candidate at the Harvard Graduate School of Education, where her research focuses on the experiences of teachers of Syrian refugees.

Vidur Chopra is a doctoral candidate at the Harvard Graduate School of Education, where his research focuses on the experiences of Syrian youth. 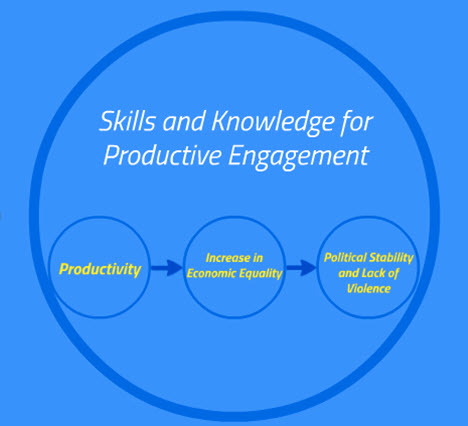 Not All Universal Education Is Created Equal

Across all three mechanisms, the nature of both the structure of education systems and content of teaching and learning are critical. In particular, education that is inclusive and relevant may have positive effects on governance, while education that alienates or marginalizes individuals and groups or that lacks relevance to the aspirations and possible livelihoods of students may have negative effects on governance. For example, the content and skills about which a citizenry is “informed” through education determine whether and how individuals have voice, seek accountability and counter corruption. Similarly, the inclusivity and relevance of the norms into which citizens are socialized appear to form a dividing line between strong and weak governance. Further, increases in economic equality by definition reflect inclusion so that all citizens can have voice, seek accountability, counter corruption, and work to support rule of law and against political instability and violence.

Overall, in our exploratory analyses, we see stronger correlations between governance indicators and education indicators in the mid-1990s than we do now. An important difference between these two times periods may be the quality of universal education. There is clear evidence that remarkable progress in increasing access to education since 2000 has often happened at the expense of quality. Indeed, not all universal education is created equal. Does the weaker correlation between universal education and good governance more recently reflect tangible differences in the quality of education? A research agenda going forward should be focused on determining the content and structures of education that are most likely to produce pathways to good governance.