Age matters for learning.  Most, if not all, education systems in the world are organized by cycles and grades that are intended to correspond with different moments in the developmental process of children.  While other methods for organizing learning can be effective, the fact is that this key organizing principle of education systems should be taken into account when assessing the extent to which these systems are effectively ensuring people’s right to a quality education.

From a very simple point of view, one can assume that educational policy should ensure that every child enters the school system on time, moves through it without being held behind and achieves the expected learning objectives.  Thus, a straightforward way of monitoring the extent to which education systems are doing their job should involve looking at levels of access, progress, completion and learning for specific cohorts of children.

Children who start their school experience late (relative to the prescribed age) are usually those who face more difficulties in accessing the school system:  Late entrance does not happen randomly and can partially be explained by the fact that older children are able to walk longer distances to reach a distant school.

As documented in the Latin American case, (UNESCO 2008, p. 114-115) children who are held behind by the system have lower chances of completing their education, since the direct and opportunity costs of being schooled are increased.  At the same time, the motivation for holding children behind (grade repetition) usually fails to ensure proper learning, (Crahay, ed. 2007. Peut-on lutter contre l’échec scolaire? Brussels: De Boeck), since schools are not necessarily ready to modify what they do in order to be responsive to the specific needs of those children who repeat a grade.  Thus, this “second chance” ends up exposing students to the same school experience that failed in ensuring their right to learn the first time.

Overage students usually experience some stigmatization as well which, in turn, contributes to creating a frustrating school experience.

Education data is not helping.  While education systems are established to serve people, the daily demands of managing them usually push the focus of attention toward students.  This shift in focus not only involves the risk that the rights of those who are not in school will be overlooked, but also has an impact on the way data on education is produced.  For example, information on enrollment volumes is critical for managing the system (i.e., the number of schools, classrooms, teachers, textbooks, computers, etc. that are needed is contingent upon the number of students).  However, measuring volume is not the same as measuring the proportion of a given population that actually enters the system, progresses through it and completes schooling on time.  Since monitoring this other set of issues requires references to specific populations, age-specific information becomes a central need and, traditionally, education statistics have neglected this area.

This situation can be illustrated by looking at available information on enrollment volumes (Gross enrollment ratios) and proportions (Net enrollment rates) of students enrolled in primary education.  Information from the UNESCO Institute for Statistics’ Data Centre for school years ending between 2000 and 2010 shows that around 170 countries and territories (out of a total of 205, and excluding Andorra, Monaco, Gibraltar and the Holy See) reported on volumes of enrollment in primary education and around 130 reported data that included ages.  In the case of new entrants to primary education, around 149 countries and territories reported volumes but less than half of them (around 70) reported this information by age.  More importantly, the number of countries reporting age-specific data has not improved over the past decade.  The following graph shows the gaps by region. 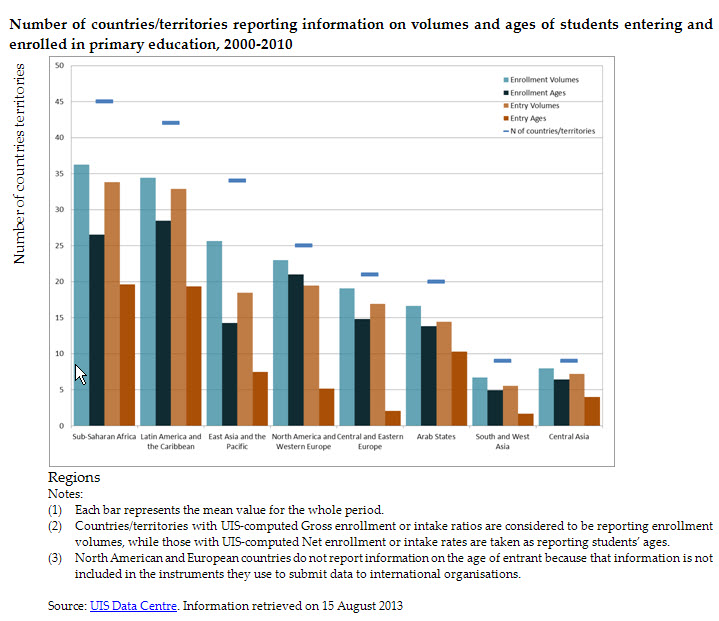 What needs to happen? While the volume of enrollment is important for managerial and financial reasons, the proper coverage of a population matters for many reasons, including issues of equity, since late entrance, grade repetition and drop-out are not independent from several demographic, cultural and socio-economic variables.

Thus, should education information systems be more concerned with developing measures that take into account the age of children?  The obvious answer seems to be yes; however, it is important to reflect on the reasons why this has not been the case so far, as well as the potential unintended consequences of accounting for age.

The current situation regarding education statistics is partially explained by a lack of age-specific information.  This sort of information might be difficult to produce in locations where birth records are not fully developed.  Thus, promoting the generation of age-specific educational data entails calling for an improvement of birth registers, which is an issue related to another set of children’s rights.

Beware of unintended consequences.  At the same time, measuring something usually gives a signal to the system agents about what matters, and there is a risk of misunderstanding the meaning of the measurement effort.  Therefore, this could promote undesirable actions regarding the re-entry of those who left the system (and are likely to come back as overage students), or force the placement of students with exclusive attention paid to their chronological age.  This is a serious concern, as age has been used to keep overage students out of school, including girls who become pregnant and would like to return.  However, the best way to address this concern is by combining information on age with other data that pays attention to total levels of entry, enrollment, completion and achievement for everyone.  At the end of the day, late entrance, enrollment and completion are better than no entrance, enrollment or completion.

These issues have been recently discussed by the Learning Metrics Task Force which is, therefore, pondering the need to promote the usage of age-specific data, together with information on total levels of access and completion.  In any event, the main idea is to focus on the population as a whole and promote the measurement of both total and on-time coverage (for populations of a given age or range of ages), as well as total and on-time completion, and combine these measures with information on the achievement of learning objectives.

Some of this information already exists.  For instance, the so-called Net Intake Rate (NIR) to a given education level measures the proportion of on-time entry (i.e., the percentage of those who are of the expected age to enter a level who effectively do so).  However, other information needs to be adjusted (for example, educational attainment data to measure total completion for populations of a given age or range of ages) or extensively promoted (such as on-time enrollment by each age).

Since age matters for learning, moving in this direction can play a significant role in promoting children’s right to a quality education, particularly if the potential negative unintended consequences are anticipated and controlled.

Finally, combining access and completion measures focused on population cohorts (so that those who are excluded or being held behind are clearly visible) should go hand in hand with information on learning outcomes to identify the extent to which formal progress in the system is actually related to learning. This means emphasizing that ensuring the right to learn is the main concern for both education systems and the information systems that should properly inform policy.