In June, the U.S. Department of Education released a 530-page set of proposed regulations on the topic of ‘defense to repayment.’ Although this sounds like an obscure topic (and reading the document is no picnic!), these proposed rules, if adopted, could allow students to be able to have their student loan debt forgiven if colleges misrepresented themselves to students. The Department of Education is currently working through this process for former Corinthian Colleges students, and tens of thousands more students could be eligible under the proposed rules.

Although forgiving student loans has the potential to benefit many financially struggling students, this will likely come at a significant cost to taxpayers. The official cost estimate of the proposed rules is between $199 million and $4.23 billion, which reflects both the number of colleges expected to be subject to the regulations and the large amount of uncertainty in the final number of students affected. To guard taxpayer dollars, the Department of Education is also proposing increasing the number of reasons for which colleges will have to post letters of credit—bonds that the federal government can keep if a college closes in order to compensate former students.

Currently, colleges have to post a letter of credit if they have a low financial responsibility score or if there are serious governance or fraud concerns. But these proposed rules would extend posting letters of credit to private nonprofit and for-profit colleges that have “significant fluctuations” in their Pell Grant and student loan awards, with the definition of “significant” left to the Department of Education to determine. However, on page 358 of the proposed rules, the Department of Education noted that 991 of 3,590 private nonprofit and for-profit colleges had a change in student loan volume of 25% or more between the 2013-14 and 2014-15 academic year. I use this 25% change as a guide in this analysis, as well as looking at the changes in dollar values.

I used data from the Office of Federal Student Aid’s Title IV volume reports to look at the number of colleges with large changes in their Pell Grant and student loan awards between 2013-14 and 2014-15, with my sample consisting of 3,575 colleges that received Pell Grant and/or student loan dollars in both years.1 Of these colleges, 1,088 (30%) had at least a 25% change in Pell Grant or student loan dollars during this period. Much of this rate is driven by for-profit colleges, of which 43% saw large changes; just 15% of nonprofit colleges had similar changes. 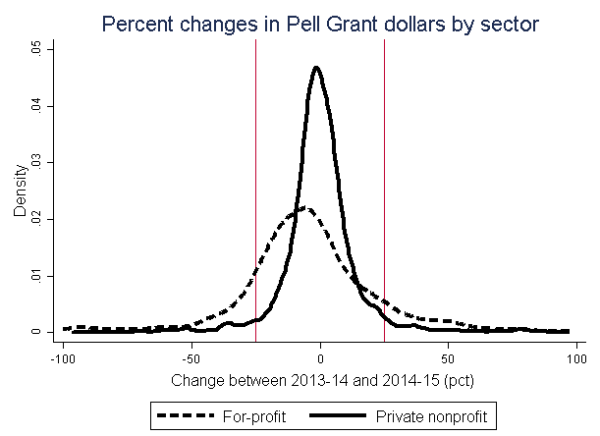 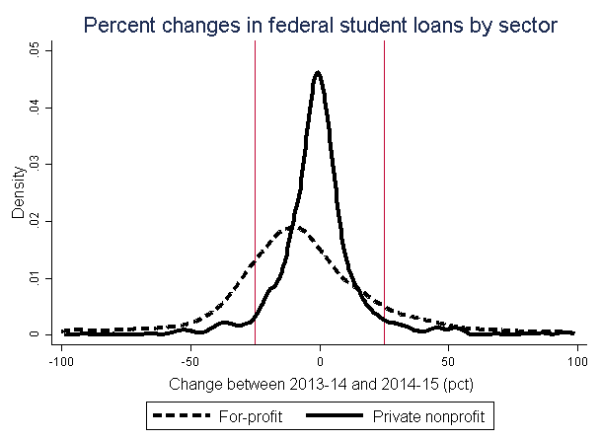 The drawback of using a metric based on the percent change in aid awarded is that very small institutions can have large percentage changes with relatively small dollar changes. The next two charts show that the vast majority of colleges with changes above 25% had relatively small amounts of federal aid in 2013-14. The median college with a change that could subject them to a letter of credit had about $250,000 in Pell Grant revenue or $550,000 in student loan revenue, which explains all of the dots right along the axis in the charts. 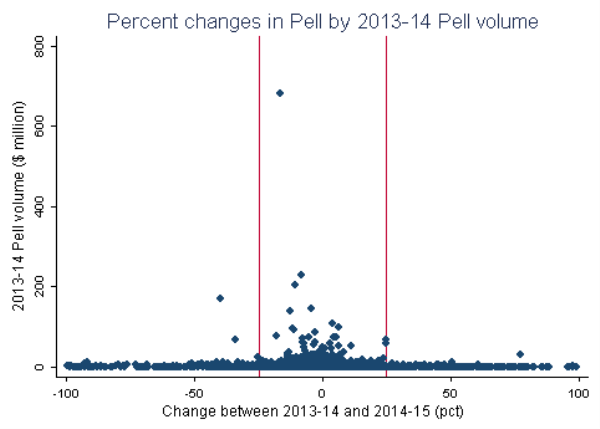 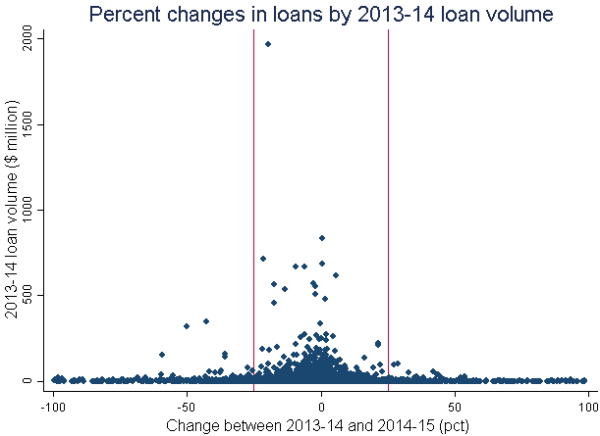 There were a small number of colleges with both sizable amounts of federal student aid in 2013-14 and large changes between 2013-14 and 2014-15. Ten colleges had more than $10 million in Pell Grants and a 25% change the following year, of which only two (nonprofit Southern New Hampshire University and for-profit United Education Institute) had gains. The eight colleges with large losses in Pell awards were all for-profits, and seven are now closed or under new ownership. The only one that is still open is Fortis College, which saw a 39% drop in Pell awards in just one year.

Six colleges with more than $100 million in student loans in 2013-14 had changes of more than 25% in 2014-15, with just one college (for-profit Ultimate Medical Academy) seeing an increase of at least 25%. Of the five colleges with large declines, for-profits Everest University (now under new ownership) and Heald College (now closed) show up again, while nonprofits Loma Linda University, Webster University, and Southern New Hampshire University had large declines. SNHU is particularly interesting, as it saw a 77.2% increase in Pell dollars at the same time it saw a 43% drop in student loan dollars.

If the Department of Education sticks to the percentage change metric for examining which colleges should post letters of credit, the smallest colleges will be disproportionately affected. Meanwhile, the University of Phoenix, which received over $2.6 billion in Pell and loan revenue with declines of between 15% and 20% in both categories, would not face additional scrutiny even though more students would be affected by any changes. And by extension, more taxpayers would be liable in the case of a bailout of these students. As being unable to obtain a letter of credit may cause some colleges to close, the federal government should potentially consider a sliding scale based on a combination of initial enrollment or federal financial aid volume for considering percentage changes in aid received.

1 I was unable to perfectly match the number of colleges the Department of Education had in its analysis using publicly available data from the Office of Federal Student Aid. This likely leads me to slightly understate the number of colleges that could be affected, as the colleges not in my dataset are probably quite small or had stopped participating in federal financial aid programs during the period of analysis.

Do sectoral training programs work? What the evidence on Project Quest and Year Up really shows